Workflows are the primary way for your devices to communicate with each other and other services. Workflows allow you to (for example) trigger email notifications, create events, send device commands and more. Workflows are, in essence, the brains of your connected solution. 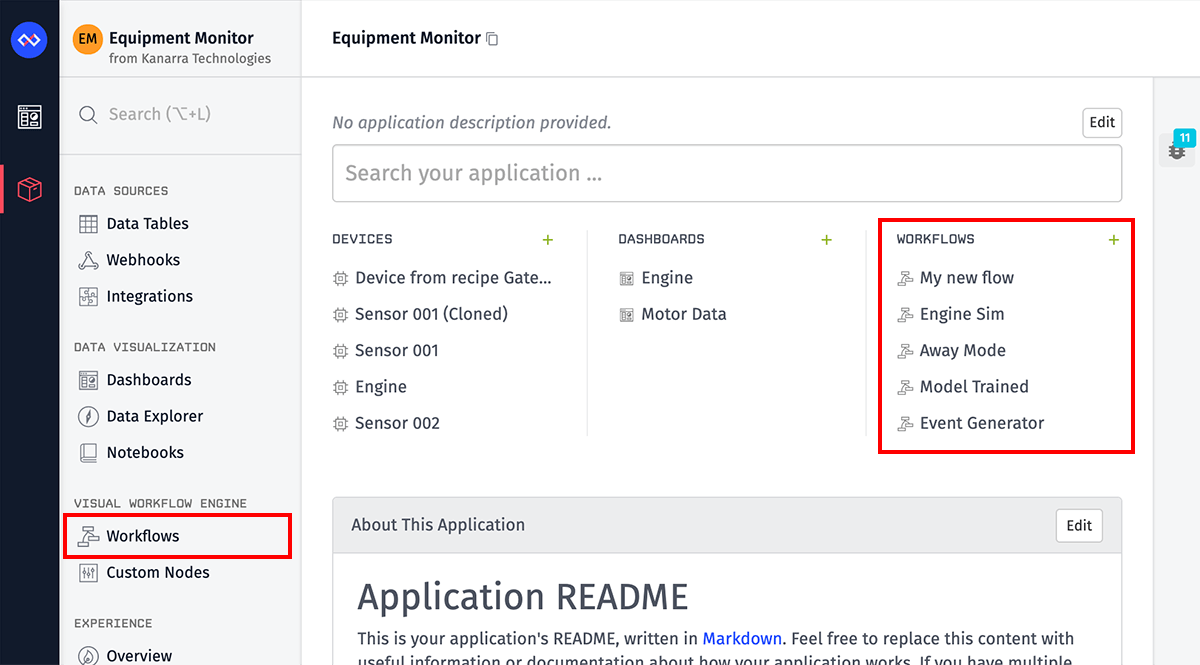 There are three types of workflows, each of which features unique functionality and is best suited for specific use cases: 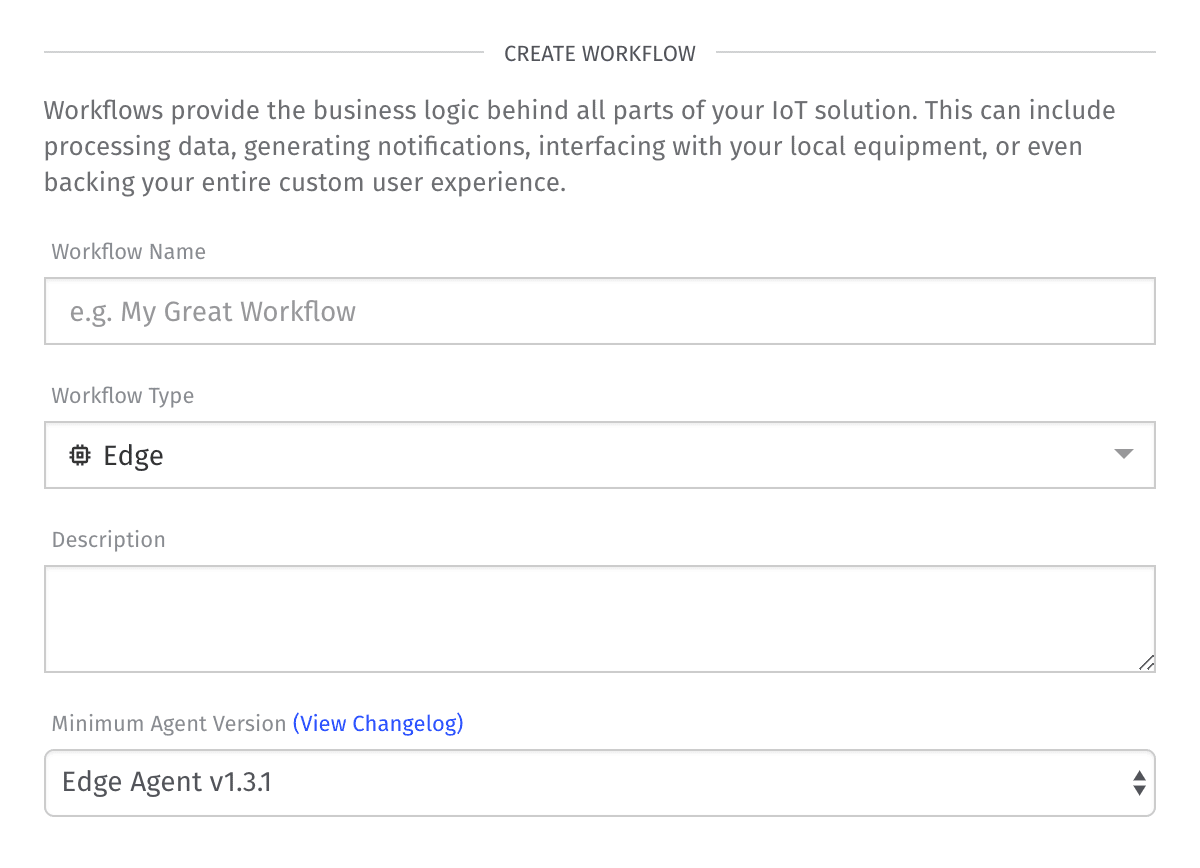 All workflows start with a trigger, and that trigger includes a payload. The purpose of the workflow is to make decisions based on this payload, modify the data if needed, and eventually result in some kind of output.

As the payload flows through the workflow, fields can be added, removed or changed. Each node in a workflow accepts a payload as an input, optionally modifies it, and outputs the payload to be the input for the next node. Some nodes (e.g. the Conditional Node) don’t modify the payload at all and simply pass it through as-is, but they do provide a way to branch the workflow down multiple paths.

Below is an example of how a payload flows through a workflow. This example uses an application workflow. 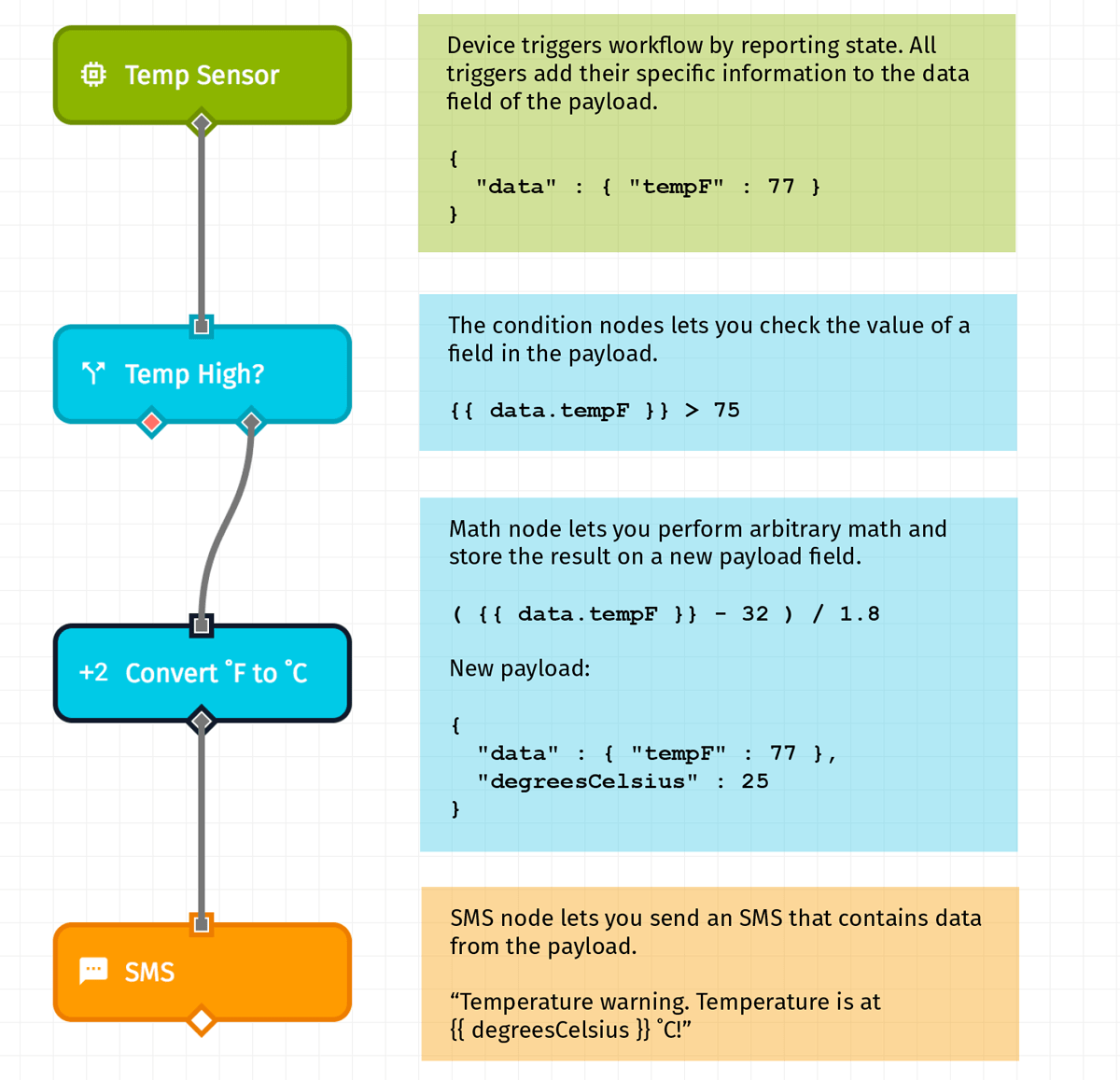 Let’s break down this workflow and explain the individual nodes and how they work with the payload. For this example, our use case is …

All workflows start with a trigger. There are many different triggers and each one starts the workflow with a different payload. All triggers, however, put their specific payload on the data field of the payload. 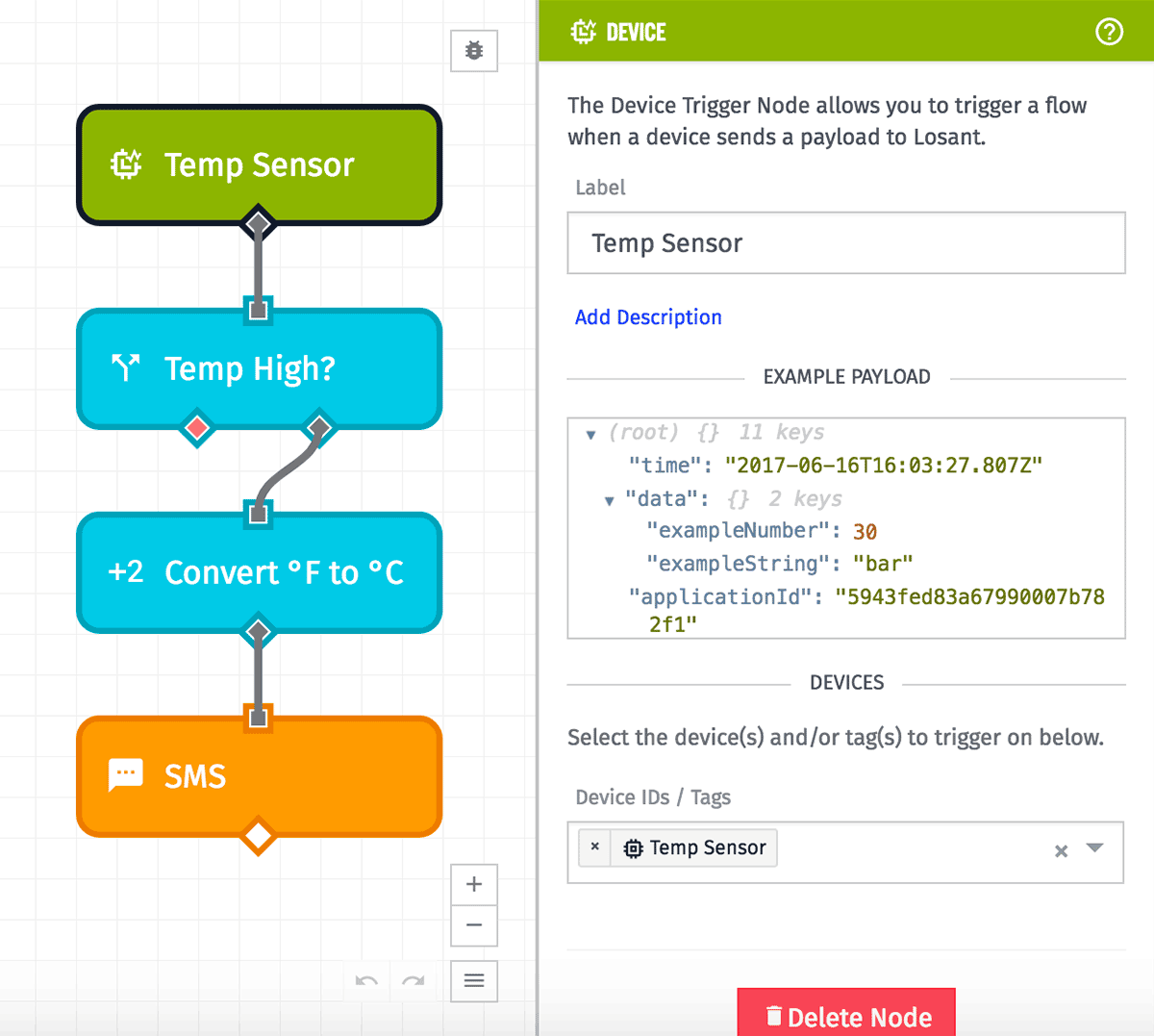 In this example we’re using a Device: State Trigger, which will run the payload whenever a device reports its state. The state that was reported is available on the payload’s data field. When the workflow starts, the payload will look like this:

The workflow will then continue with this payload and pass it to the next node. 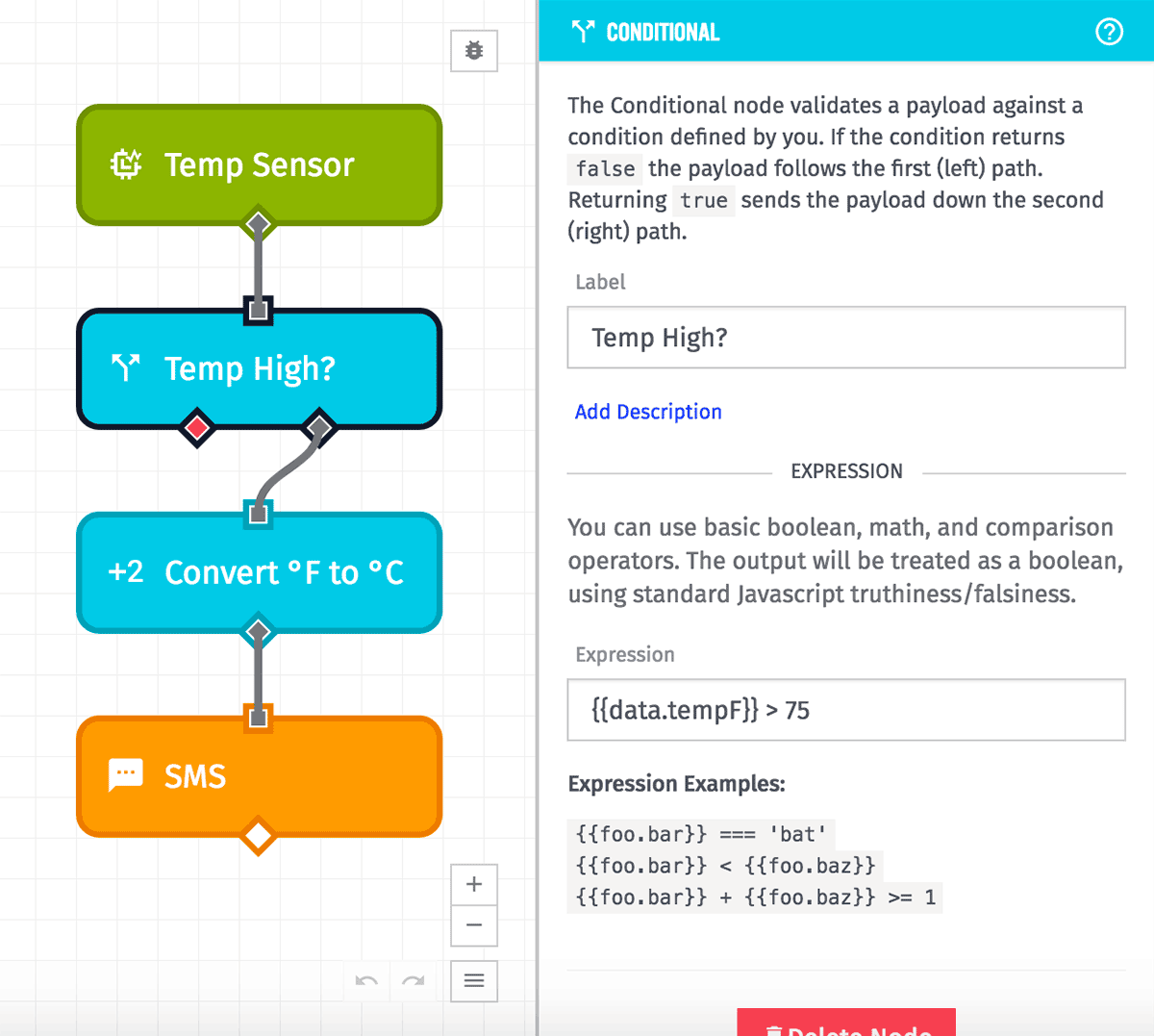 This node doesn’t modify the payload, but it is using a value in the payload to make a decision. In short, the expression in the Conditional Node allows for testing the truthiness of a condition against a payload property. In this example, the expression is:

Whenever this node is executed it will grab the data.tempF value in the payload and check to see whether it’s greater than 75. Since we saw that the tempF value in our payload is currently 77, this workflow will branch to the right. The Conditional Node doesn’t modify the payload, so the same payload that was passed to it will flow as-is to the next node in the workflow.

A Math Node allows you to write mathematical expressions and store the result on the payload. 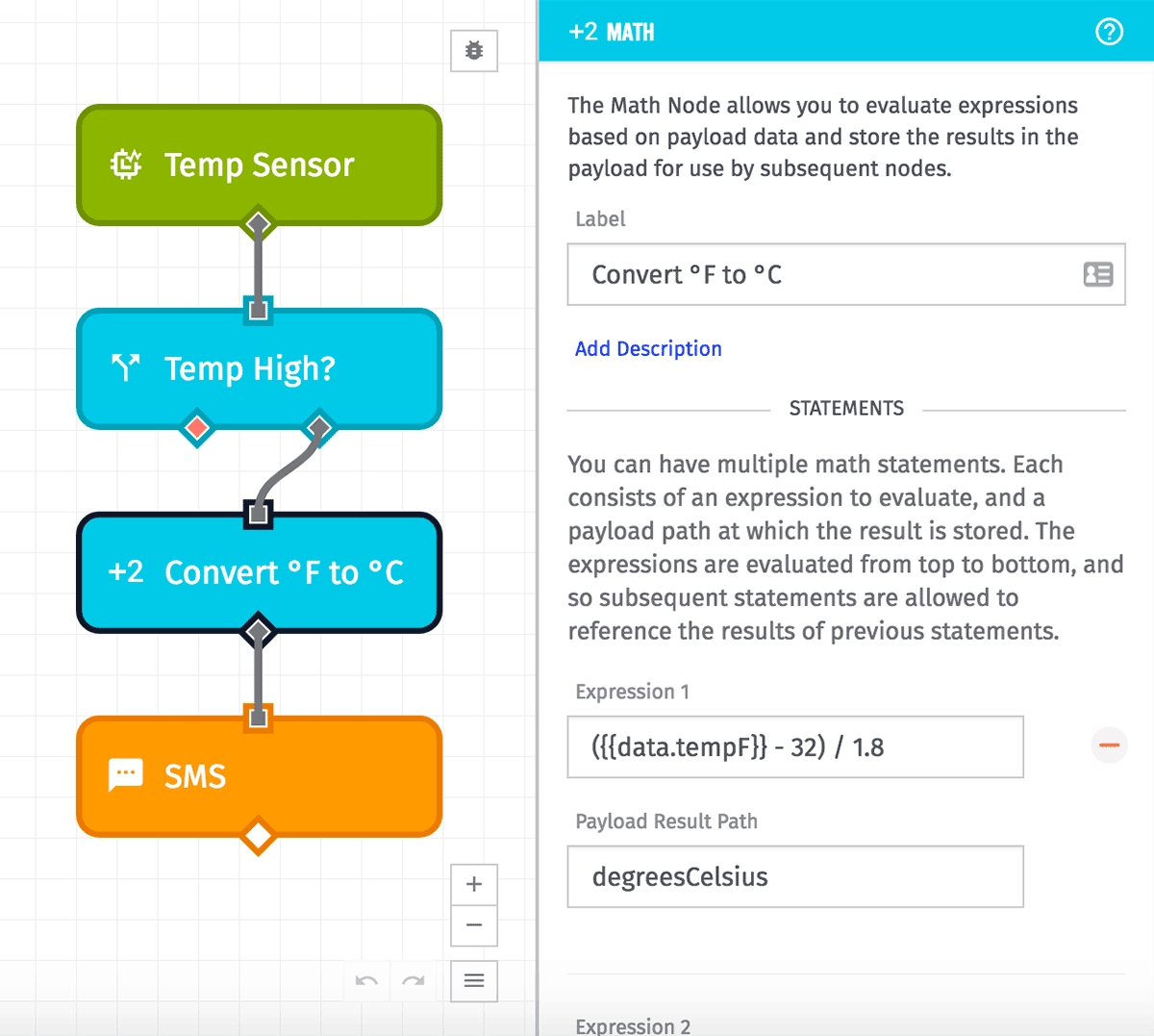 Each Math Node supports multiple statements, but this example is only using one. Each statement includes the actual expression and a payload path for where to store the result. For this example, the expression is:

Just like with the Conditional Node, you can reference values from the payload in these expressions. This is simply converting degrees Fahrenheit to degrees Celsius.

The SMS Node allows you to send an SMS message to one or more phone numbers. This example demonstrates how to use the newly modified payload in a useful way. 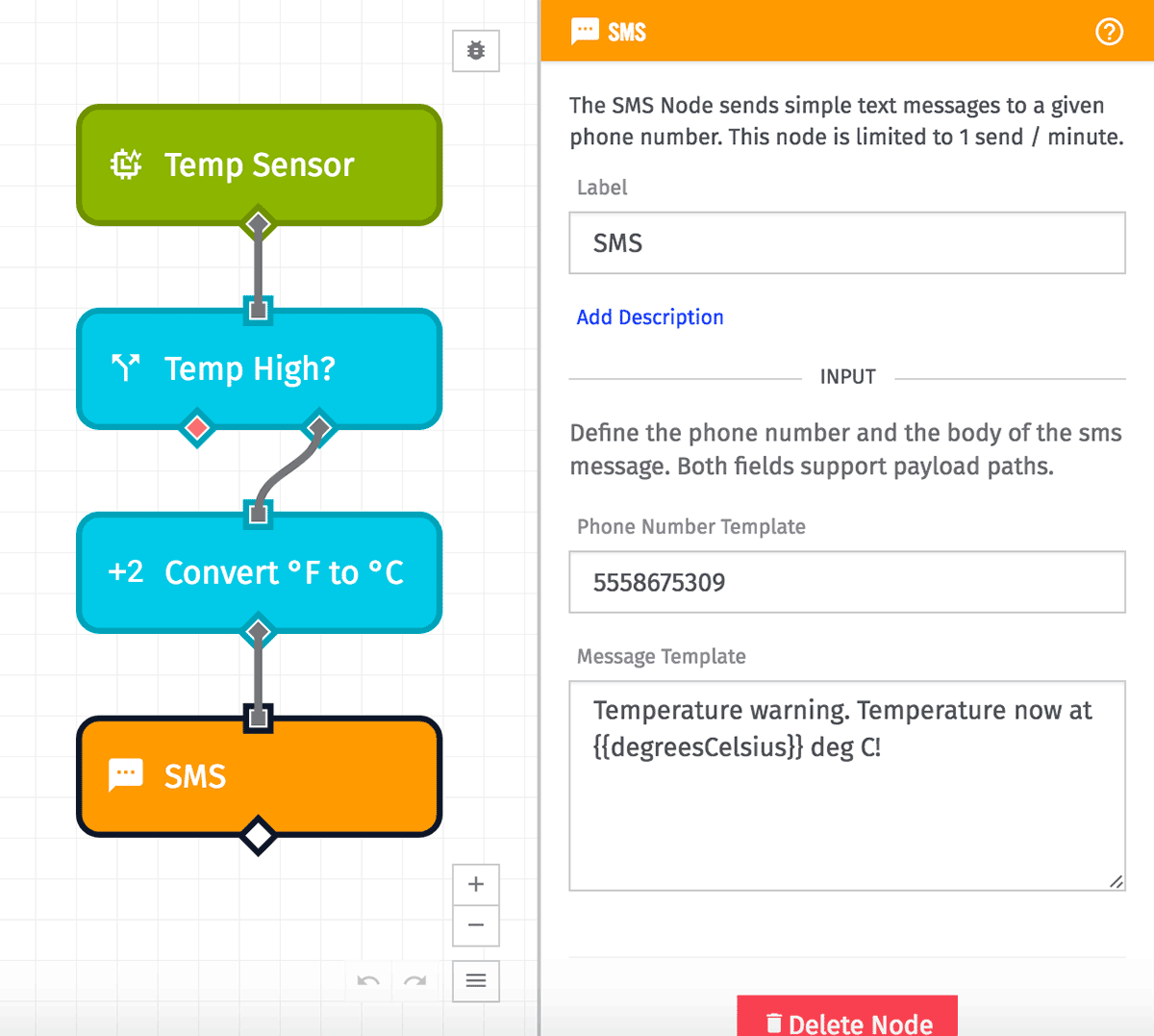 The SMS Node supports string templates for its configuration values – but unlike evaluating to a boolean as it does for the Conditional Node, or a number for the Math Node, the SMS Node uses that value to create a custom message containing a value from the payload.

To improve this user’s experience, there are a number of additions and improvements we could make to this workflow. For example:

The payloads described above only include what was added by the trigger. All payloads include a common set of other, potentially useful fields:

For example, a timer trigger will start a workflow with the following payload:

Clicking the Export option will open a modal, which will allow you to either export the version to a file, or (if you have collaborator permissions within the application) clone it as a new workflow. When exporting the workflow to a file, that file can then be imported as a new workflow of the same type. 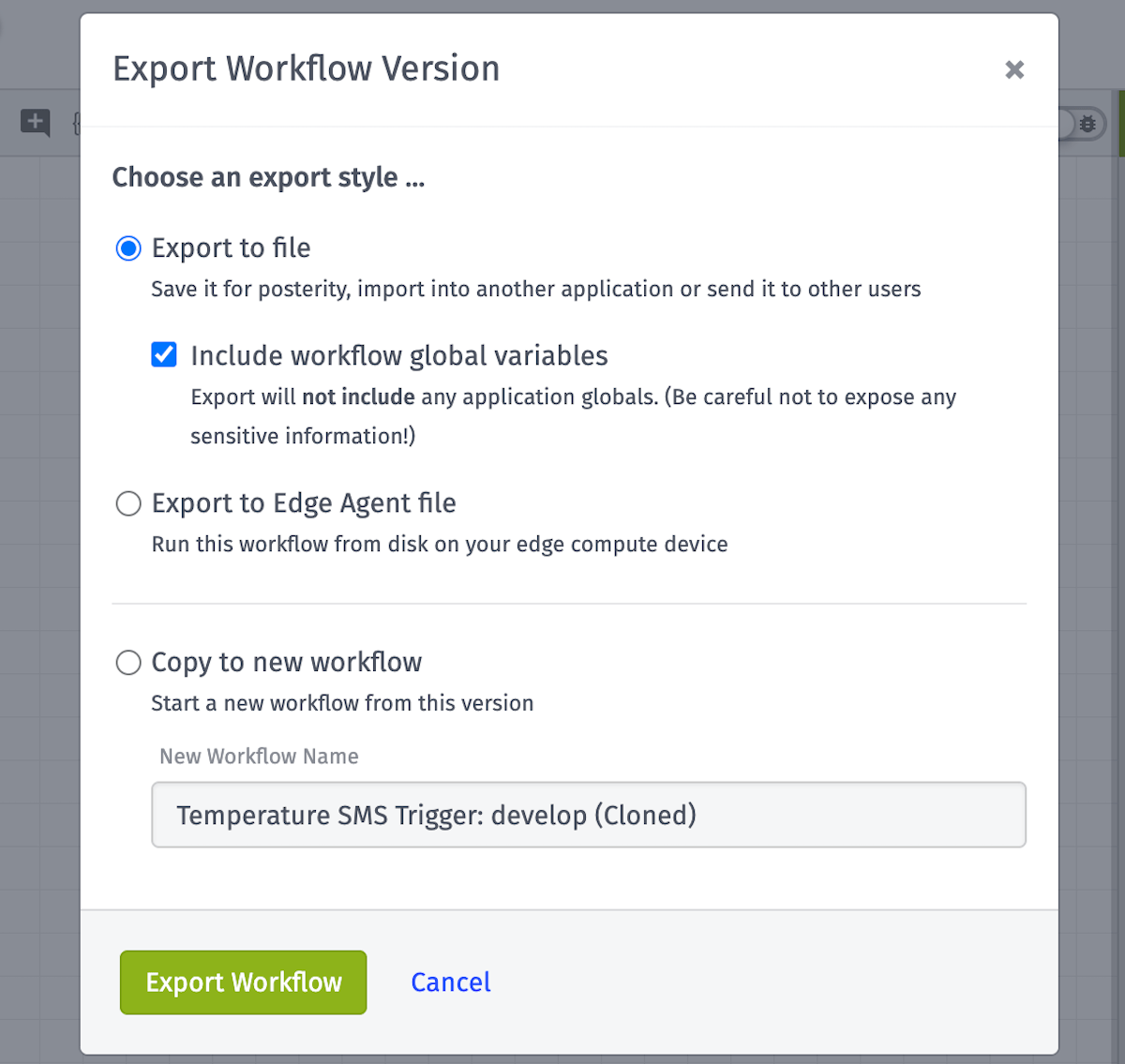 You can import a workflow from your application’s workflows list, by either dragging the exported file onto the appropriate list, or clicking the Import button (which will allow you to browse for an exported workflow file). Imported workflows will by default be set as disabled, to give you the chance to make any needed modifications before the workflow starts running.

Workflows can have a set of global config keys, which are essentially keys/value pairs added to the payload under the globals key whenever the workflow runs. This is a great place to store configuration values or API keys, especially if they are needed for use in multiple different nodes. Globals can be accessed through the “Globals” tab in the right dock. 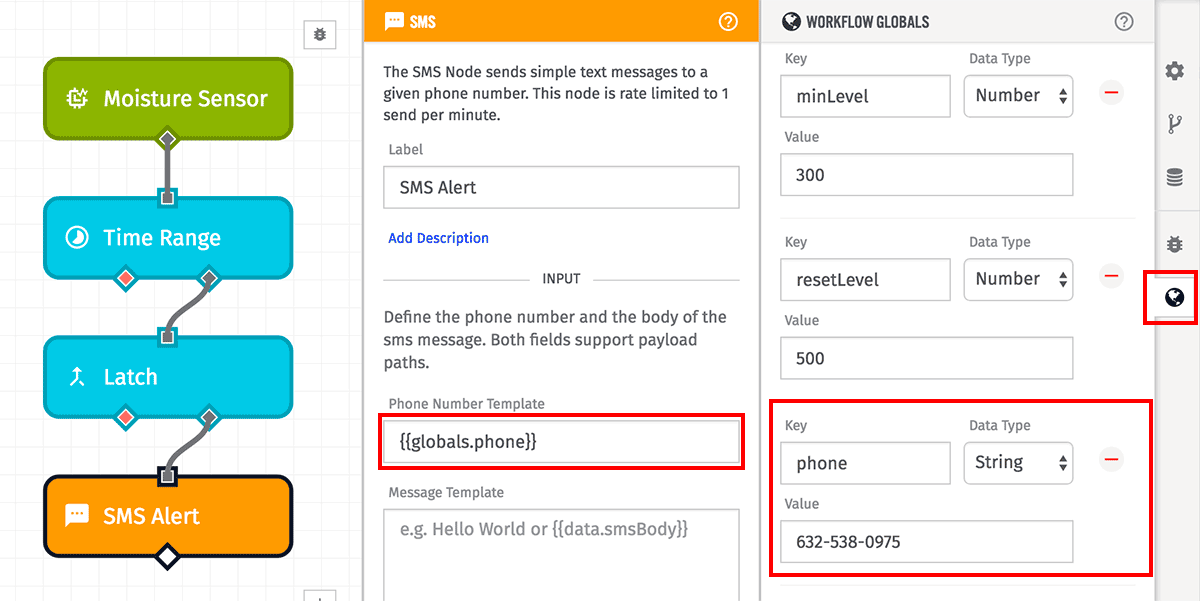 In addition, any Application Globals configured in the application will be accessible here as well. Any application globals can also be overridden at the workflow version level by creating a workflow global with the same key name.

In the above example, there are three global keys set — minLevel (with a numeric value of 300), resetLevel (with a numeric value of 500), and phone (with a string value of 513-555-1212). Complex objects can be configured by choosing JSON as the data type of the value and adding JSON-formatted data as the value. Whenever the workflow runs, the payload will always include these global values. For the above example, a payload might end up looking like the following:

These values will be accessible in any node configuration that expects payload paths (such as globals.minLevel) or templates (such as {{globals.phone}}).

Workflow globals are version-specific. Changing global values in one version (including your develop version) will not affect globals in your other versions. However, changing an application global’s value will affect any versions referencing that global, provided the value was not overridden for that version. 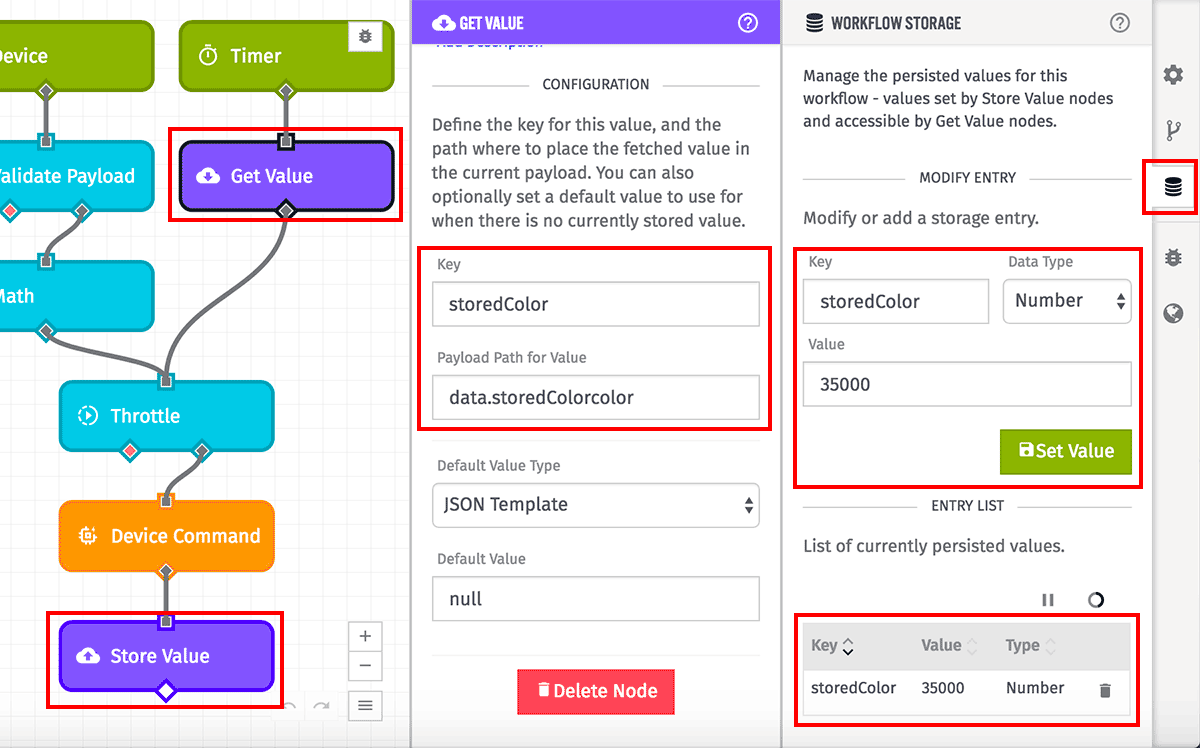 NOTE: The act of clicking Set Value has an immediate effect across all workflow versions. This will change or add the value immediately; this is separate from saving/deploying the workflow.

In the bottom half of the interface, you can view the values of existing storage identifiers. In this case, there is one identifier, storedColor, and its value is the number 35000. This identifier was previous set by the Store Value node in a previous run of the above workflow. This table of values will automatically refresh every 60 seconds, but you can always click the refresh link on the upper right if you want to see the latest values now.

Storage keys do expire. If a key has not been changed or accessed within the data retention limit of the owning Organization or Sandbox, the storage key will be deleted.

You can also delete values individually by using the delete button on the right of each row, or wholesale by clicking the “Clear All Entries” button at the bottom of the table.

NOTE: Deleting, just like setting or modifying a value, takes effect immediately and is not tied to saving/deploying the workflow.