Workflow Metrics provide high-level overview statistics about the usage and performance of a workflow, as well as a record of any critical errors registered by your workflow runs. The information found within this tab can be useful for debugging nodes and identifying integrations with third-party services that may be timing out.

Note: Workflow Metrics do not update in real time. Rather, they are aggregated and reported approximately every 15 minutes. 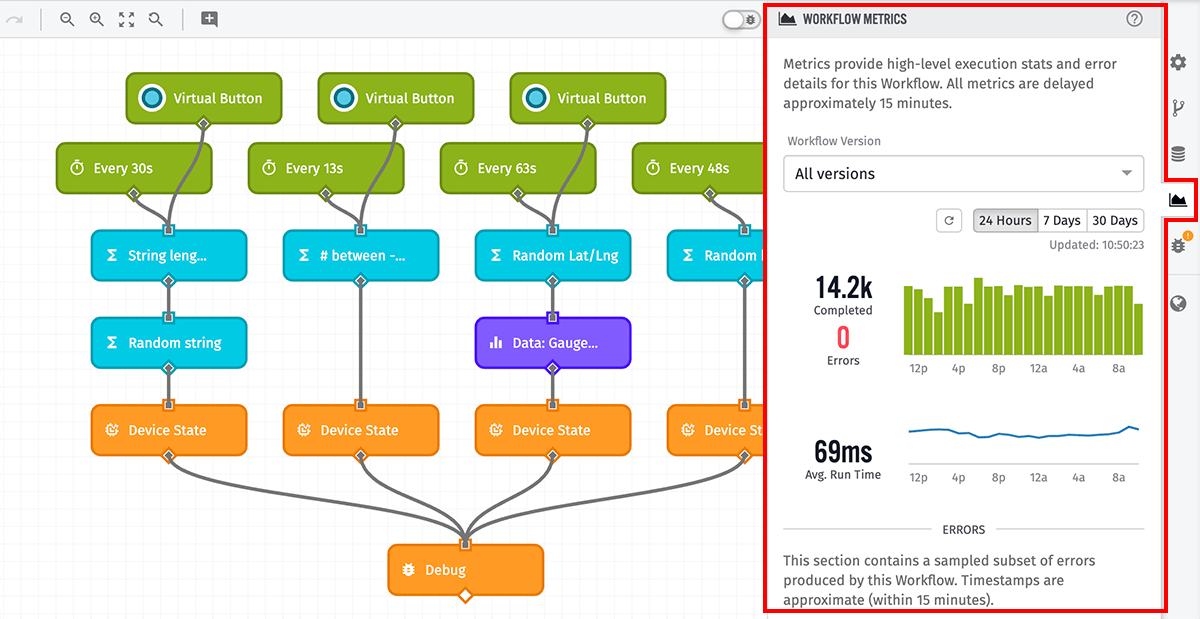 By default, the Metrics tab displays statistics across all versions for the past 24 hours, but these settings can be changed:

There are several different statistics available when viewing a workflow’s given metrics.

This is the number of final nodes in a workflow that is reached without any execution errors. For example, given one execution of a workflow via a trigger, the workflow itself may branch out to multiple paths from any node output. Each of these branches, if successfully executed to completion, would count as one “Path Completed.”

Every workflow execution counts as at least one “Path Completed,” even if the trigger that started the workflow does not connect to any other nodes. If your workflow branches in multiple directions from any node output, one execution can also lead to multiple “Paths Completed” per run.

Any branch of a workflow that encounters an uncaught error results in a “Path Failed.” For example, if your workflow includes a MongoDB Node configured to “Error the Workflow” when the operation fails, and a template provided for the “Connection URI” resolves to an invalid value, that will log in the metrics as a “Path Failed.” Any nodes that follow the MongoDB Node will not run, and their paths will not count toward your workflow’s “Paths Completed.”

Similar to how “Paths Completed” is calculated, one workflow execution can lead to multiple “Paths Failed” if the workflow branches out to multiple paths and those paths each encounter a workflow-stopping error.

The Average Run Time is calculated by dividing a workflow’s “Wall Time” by its “Run Count.”

“Wall Time” is defined as the number of milliseconds between a trigger firing and the last to complete node that connects back to the trigger, regardless of if that node completed or failed. In the case of failure, the nodes connected to the node in question will never fire and are thus not included in any “Wall Time” calculation.

“Run Count” is defined as the number of times a workflow trigger fires. For example, a device reporting state 10 separate times will cause a Device State trigger to fire 10 times, leading to a “Run Count” of 10. If your workflow does not have any cases where multiple nodes branch off of a single node output, “Run Count” would also be the sum of “Paths Completed” and “Paths Failed” over the same time period.

The biggest driver of changes in “Average Run Time” is connections to third-party services through the HTTP Node, the Azure: Function Node, the GCP: ML Node, and many others. If those services are experiencing slowdowns or are unavailable, expect the Average Run Time to increase significantly.

Use the workflow in the screenshot below as an example for calculating the various statistics. These calculations are based on a single execution of the workflow: a device reports state, which causes the Device: State Trigger to fire one time.

This leads to 5 Paths Completed at the following nodes:

This leads to 3 Paths Completed at the following nodes:

This leads to 3 Paths Completed and 1 Path Failed at the following nodes:

Any node execution that results in a “Path Failed” as described above leads to an error appearing within the “Errors” section of the Workflow Metrics tab. 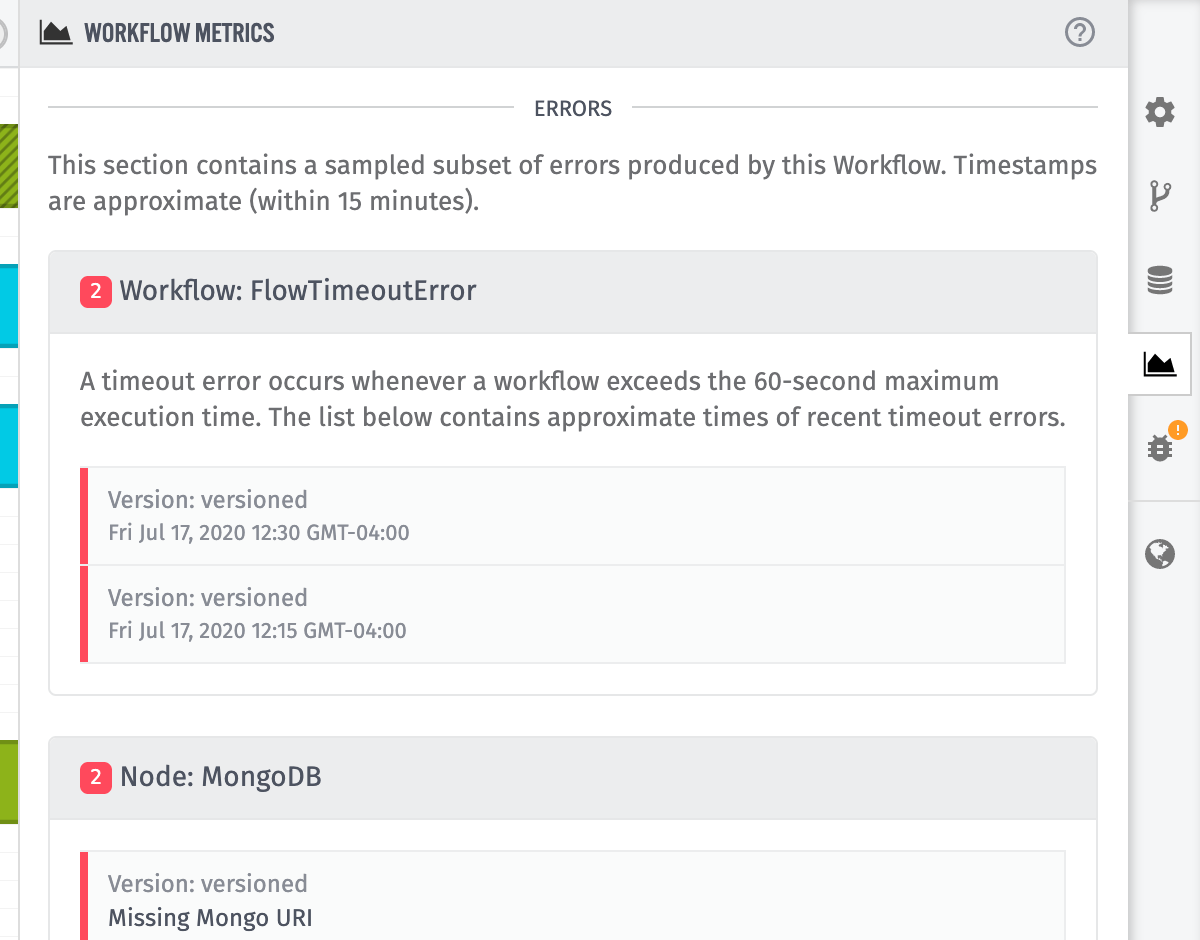 Within the “Errors” section, nodes are grouped by ID. Within one node group, you may find multiple instances of the same error, or instances of different errors thrown by the same node.

To that end, if your workflow contains two separate HTTP Nodes, and each node causes errors, you will see two separate groups within the “Errors” section: one for each of your HTTP Nodes.

Nodes are also grouped across versions. For example, if an HTTP Node in your workflow’s “develop” version equates to the same node (by ID) in another version of the workflow, and both versions throw errors on the node, you will see instances of the errors from both versions when requesting stats across all versions/devices.

When a node is deleted, the errors thrown by that node will remain within the “Errors” section. However, the node’s name in the group header will be replaced by a reference to the node ID.

If any errors occurred within the workflow run that were not the result of a specific error, those will appear at the top of the list of errors. It is possible to encounter “Workflow Timeout” errors if, for example, a node that calls a third-party service does not receive a response before the workflow’s maximum 60-second run time. Timeout errors, when prevalent, will have a major impact on your workflow’s “Average Run Time.”

In practice, timeouts are the only workflow-level error you are likely to encounter, though there are rare cases where you may find other such errors.