The Geofence Node allows a workflow to branch based upon whether a device reports state within a certain geographic area. 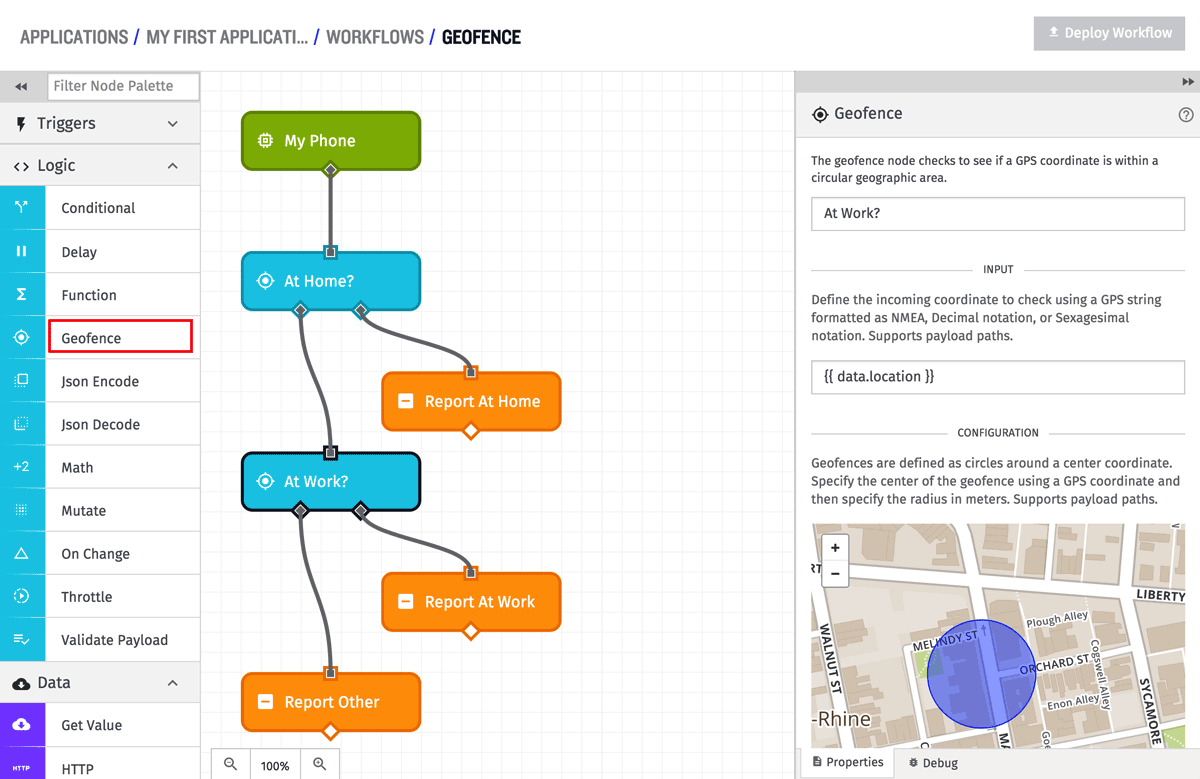 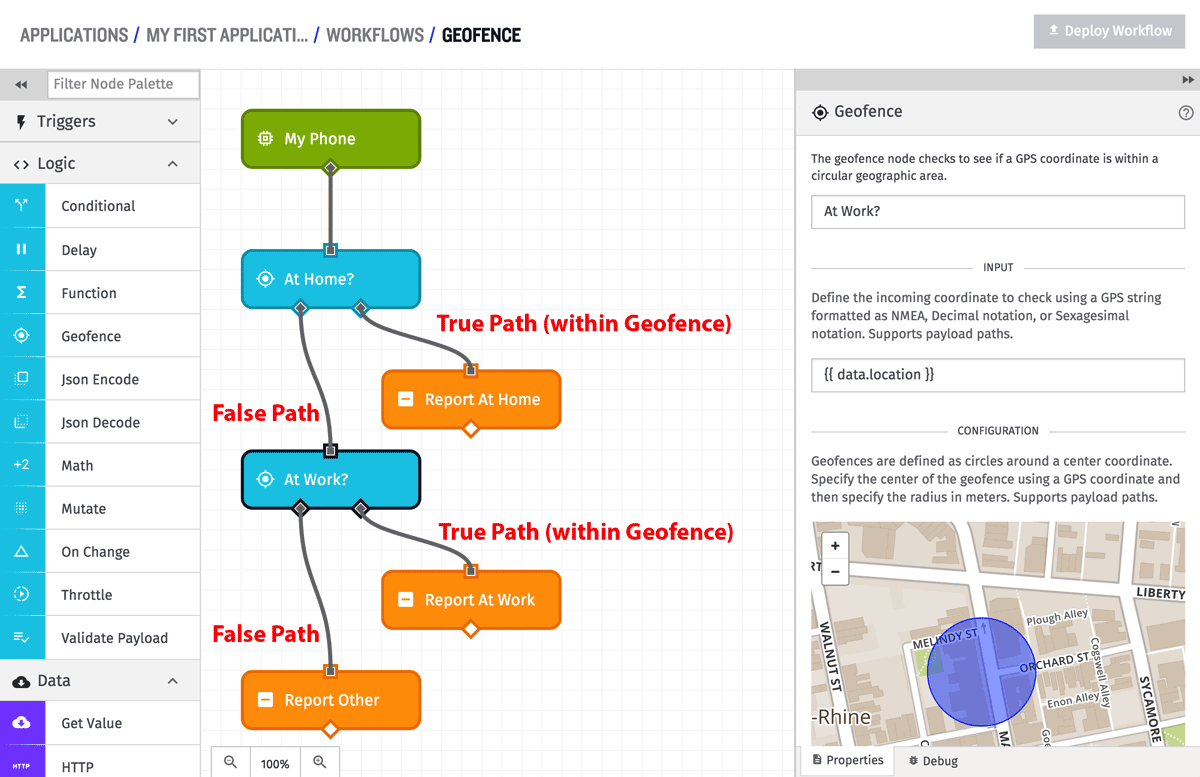 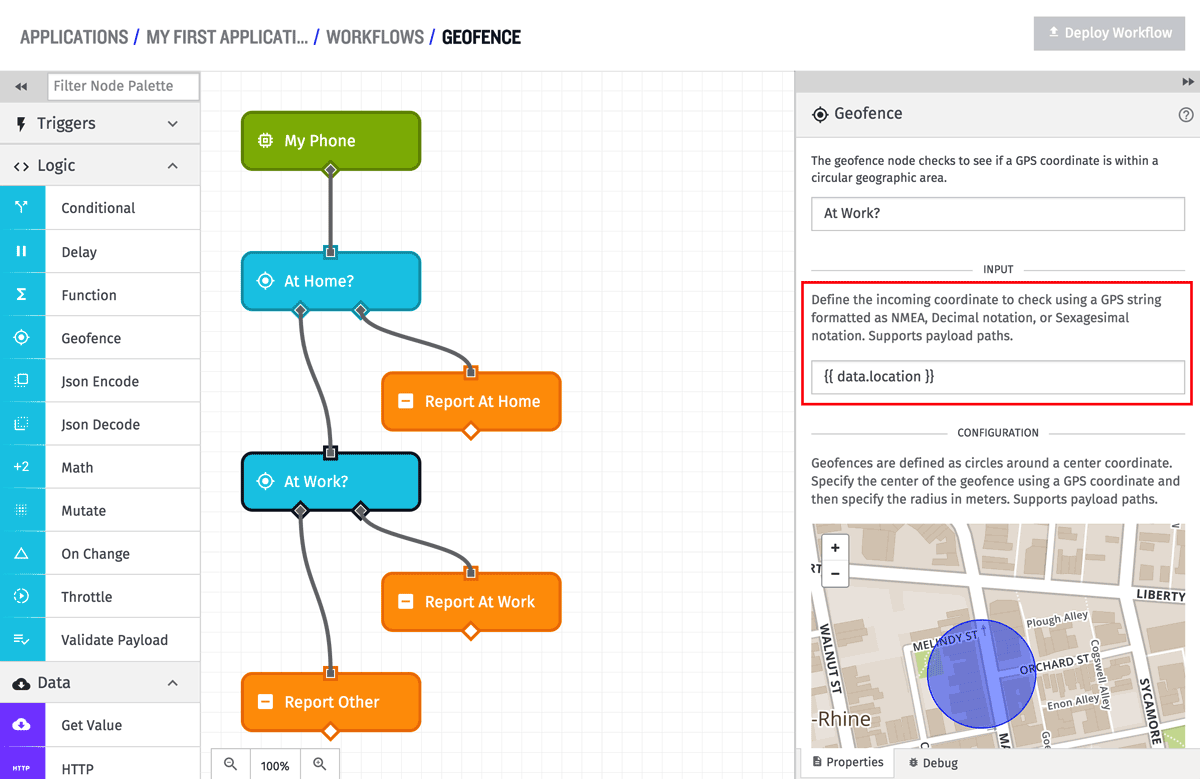 The input coordinates can be defined by any of the forms we support for GPS device state. No matter which form is used, the field will also accept a string template for the value. In the above example, the input coordinates are defined as the data.location field of the payload, which contains an NMEA string.

[Embedded Workflows](/workflows/embedded-workflows/ support different formats for defining GPS coordinates.
String templates must resolve to one of the following:

String templates that resolve to comma-delimited coordinates or NMEA strings are not valid. 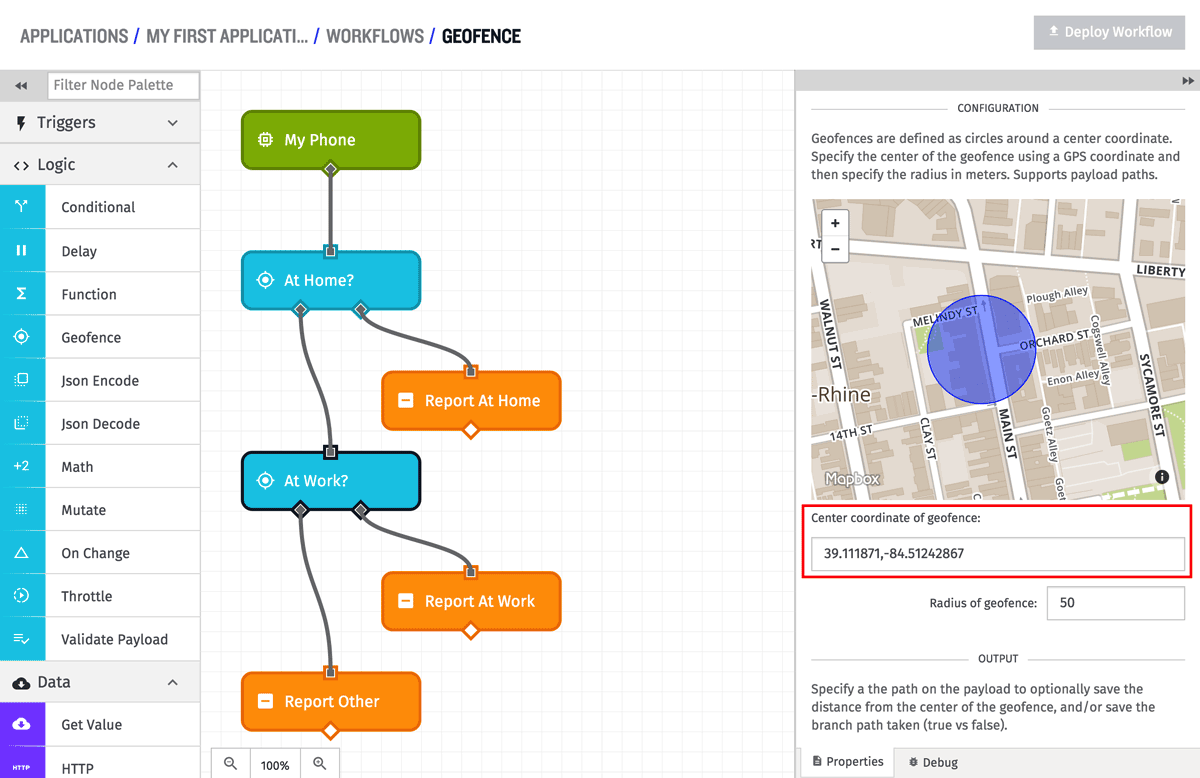 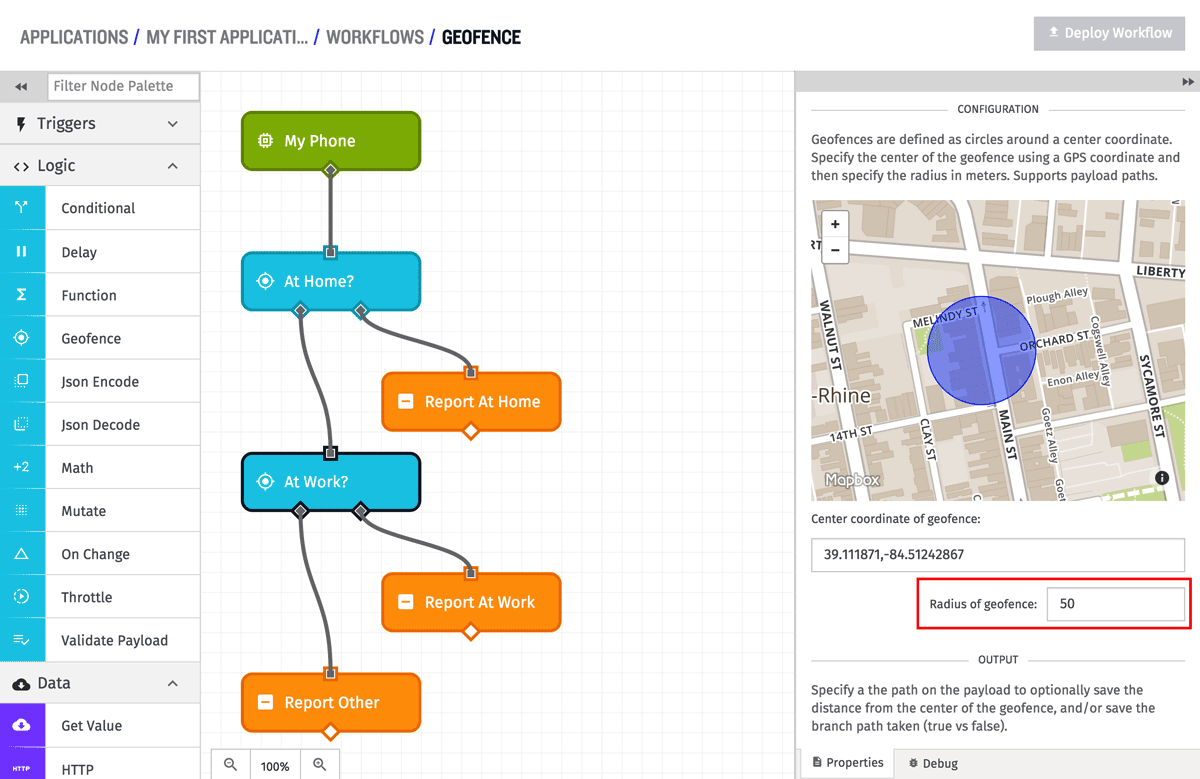 Adding Distance or Branch to the Payload 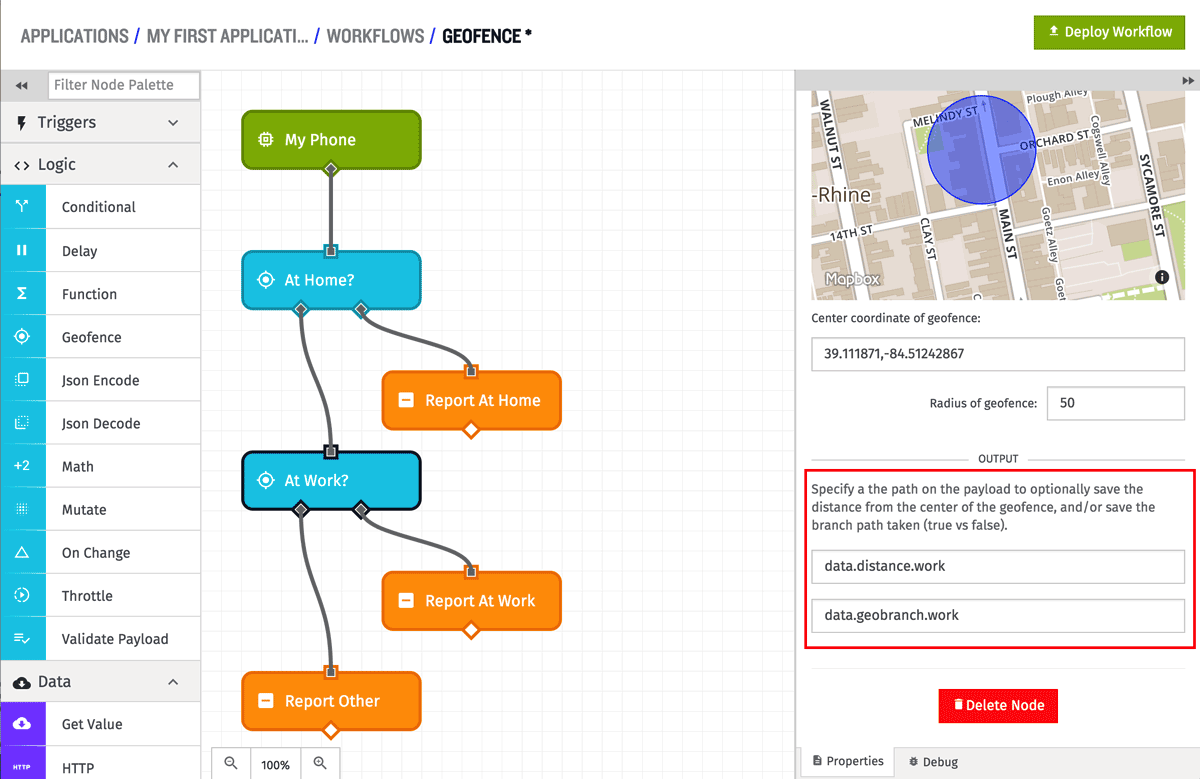 So, for example, given the following payload:

The payload after execution of the geofence node would look like:

The Polygonal Geofence mode lets users draw their own polygon using the map’s drawing tool or by typing the coordinates into the text box below it using any of the forms we support for GPS device state.

To draw a polygon, click on the polygon tool in the top-right corner of the map and right-click where you’d like to begin to draw your polygon. To set the line and begin drawing in another direction, right-click on the map again. Do this until you have defined the area you with to monitor and then double-click to finish drawing. The coordinates of the drawn polygon will be placed in the text box below and can be edited and adjusted for more precision.

To delete a polygon, click inside of it and click the trash button in the top-right corner of the map or delete the coordinates in the textbox underneath the map. 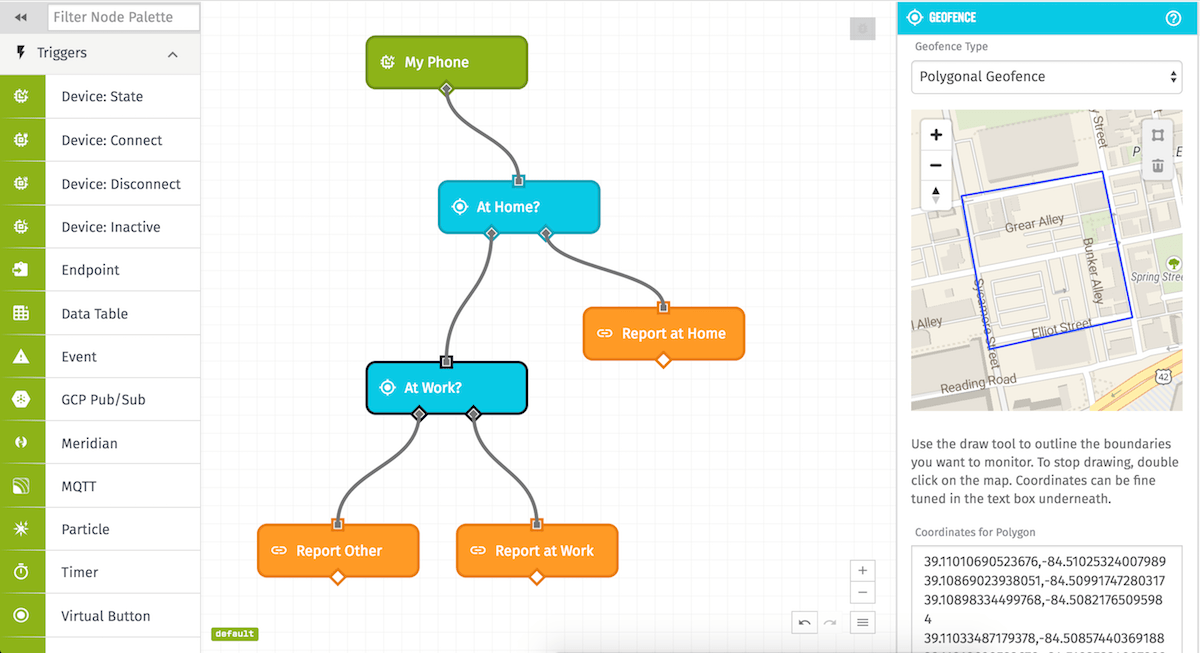 The Geofence Node also allows polygonal geofences to be passed in via an array of GPS Coordinates defined on a payload path. Note the order of the points in the array is important, as it determines how the polygon is drawn.