Organizations and Sandboxes are subject to limits on the number of resources (e.g. devices, applications and more) that are registered under that entity. Organizations may request increases to individual resource limits, though any such request may come at an additional cost. Sandbox limits cannot be adjusted.

To view an Organization’s current resource usage, navigate to the Organization’s overview page. There, you will find the current usage counts by resource type, as well as the number of payloads consumed in the billing period broken down by payload type.

Your Sandbox usage for the current period is visible under the “My Account” section, on the “My Sandbox” overview page.

Though limits do not directly apply to applications, an application’s current usage can be viewed on the application’s overview page. This can, for example, help users determine which of their applications is generating large numbers of payloads and make adjustments to stay within usage limits.

All message throughput is also subject to throttling and rate limits.

Losant’s MQTT broker usage is subject to a few limits:

Event creation is limited to 15 creations in a 15-second window per application (or, on average, one per second).

Webhook requests are limited to 100 calls in a 10-second window per webhook (or, on average, 10 per second). If you exceed this limit, the webhook will respond with a 429 “Over rate limit, request throttled” error.

The size of an individual integration message is also limited to 256KB.

Presses of a Virtual Button in an Application Workflow are limited to 100 calls in a 10-second window per Virtual Button (or, on average, 10 per second). This includes invocations by manual press, by Workflow Trigger Node executions, and by Input Controls Block executions.

Depending on whether your application is owned by an Organization or a Sandbox, the behavior of your account once a payload limit is hit varies. 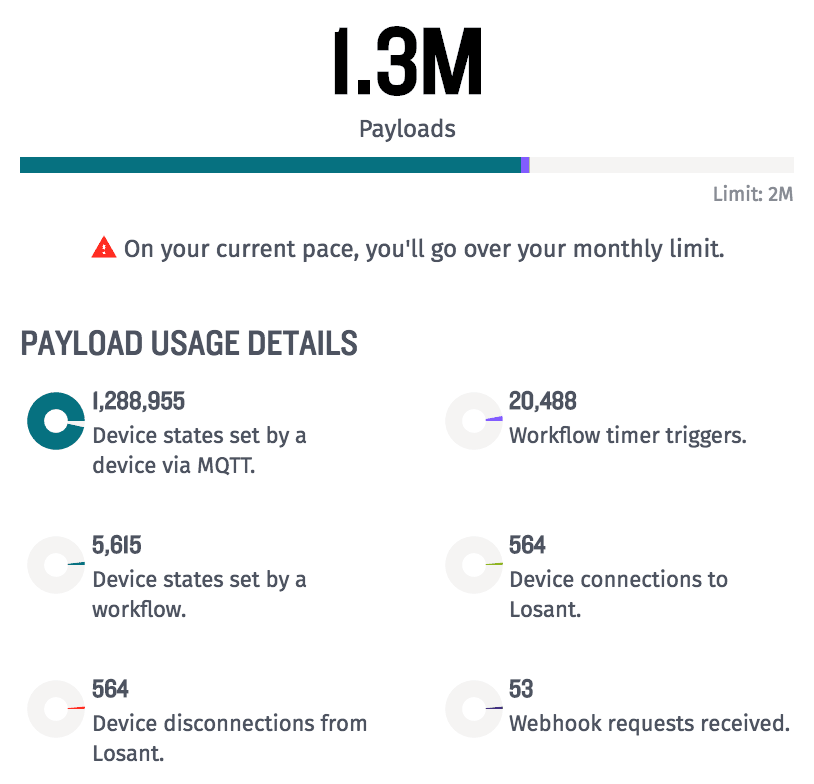 Note: For current Organization and Sandbox usage details, we also supply a message indicating if you are on pace to exceed that period’s payload limit. This is based on the number of payloads per second generated during the period extrapolated over the course of the entire period. Therefore, if your payload usage dramatically changes, it may take some time before the changes are reflected in the prognosis.

For Organizations, Losant will continue to accept payloads after you have reached your monthly limit. However, payloads over that limit come with an additional cost.

For Sandboxes, the number of payloads generated by your applications is a hard limit, in that once the limit has been exceeded for the period, any payloads sent to or generated by the platform will be rejected. If you reach this limit, your options are to:

We also supply a detailed breakdown of the number of payloads by type so that you can see where the majority of your payloads are accruing and make adjustments to your applications if necessary.

The following interactions count as a payload:

These interactions do NOT count as a payload:

The following resources are subject to your Organization or Sandbox data retention limits:

In addition, the following data is subject to custom limits, regardless of your Organization’s data retention limit: