Every technology has best practices. In this guide, we’ll address some common issues that impact workflow performance, as well as some tips that can make your workflows more efficient.

Much of this guide is based on the Deeper Dive Webinar “Building Performant Workflows That Scale With Your IoT Solution”. Feel free to check out that video for a demonstration of many of the topics discussed here.

Before we begin, a few disclaimers:

The Function Node allows the execution of arbitrary, user-defined JavaScript code. Losant users well-versed in JavaScript should be very comfortable using this node in a wide variety of cases. It can be a powerful tool, but it should be used sparingly.

This is largely due to the containerized nature of the Function Node. For security purposes, the user’s code runs in a discrete sandbox and is validated before being allowed to enter the workflow. This imparts a fixed time cost every time a Function Node is used, even though the code itself is executed quickly.

In addition, there is a limit to how many Function Nodes can run simultaneously on a single application. Overuse of these nodes in one or more workflows can cause application-wide performance issues, although this is a rare occurrence.

We’ve constructed a series of tests to demonstrate the performance advantages and disadvantages associated with the Function Node. In each of the three examples shown below, we’re executing the following tasks:

Function Node Within a Loop

In this first demonstration, we’ve placed a Function Node within a loop to accomplish the test scenario described above. This means the Function Node container is being constructed and deconstructed 1000 times. 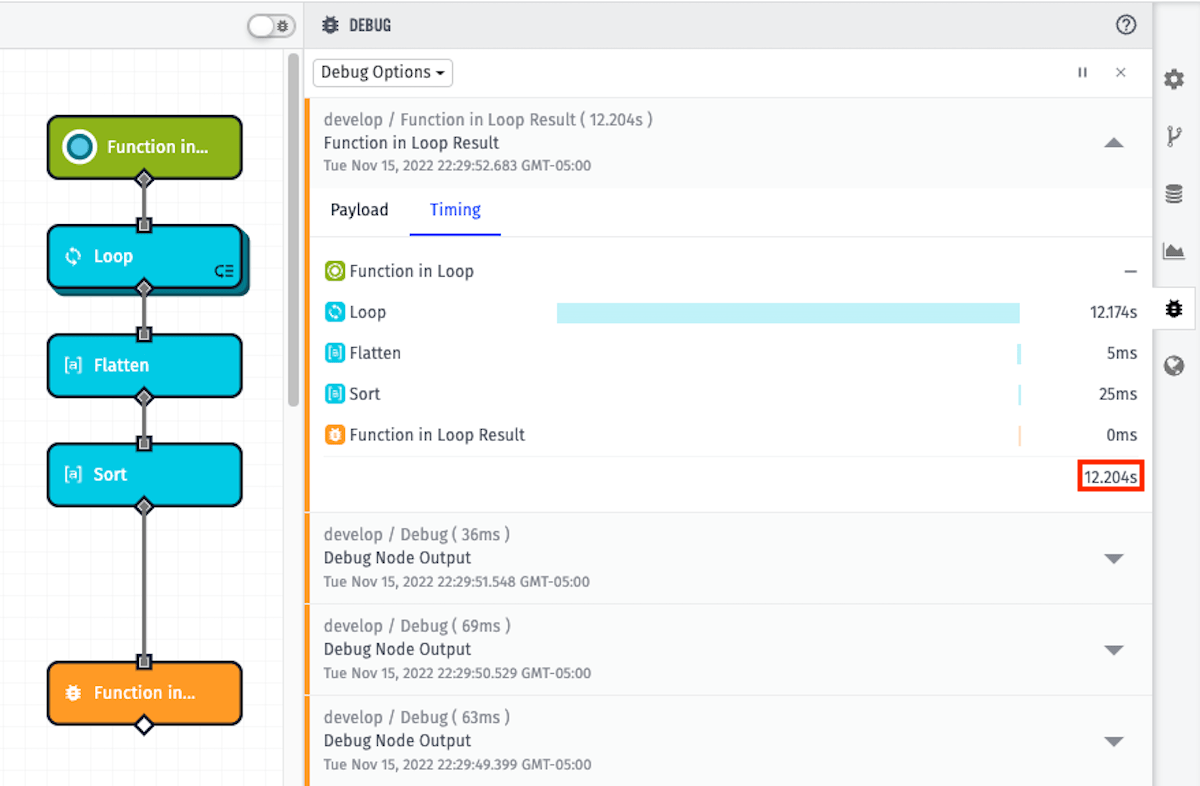 In the above examples, we determined for that particular set of tasks, a single Function Node provided the best performance. However, let’s take a look at another task:

Since the native node doesn’t have to construct and deconstruct a container to operate within, we will see that native nodes oftentimes outperform Function Nodes when given an equivalent task. 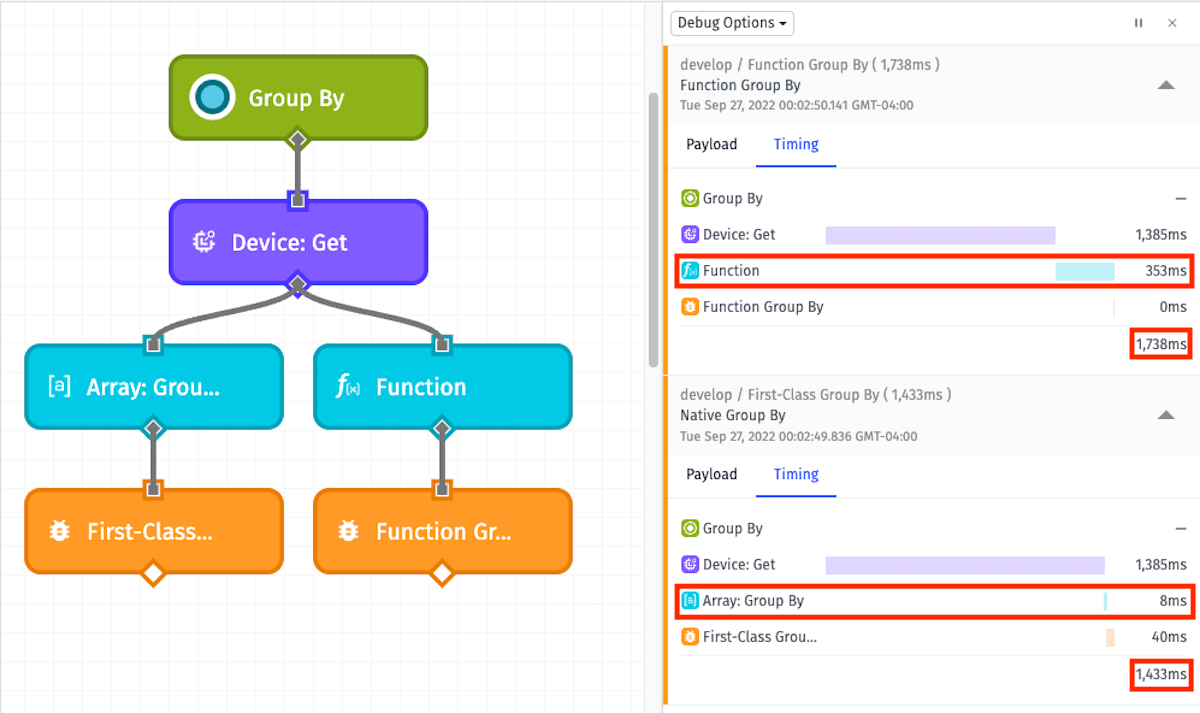 The important takeaway from the example above is the difference between the Function Node execution time (353ms) and the Array: Group By Node (8ms).

The Loop Node allows for iterating over values on your payload, or for performing a certain operation a set number of times. When configuring a Loop Node, you must specify whether the loop should run in Serial Mode or Parallel Mode.

Serial loops run one iteration of a loop at a time, while parallel loops run up to five iterations of a loop at a time. This means that parallel loops are almost always the most efficient option, executing up to five times faster than serial loops. This is especially true when the loop is making calls to external services (via the HTTP Node, Losant API Node, etc.), since multiple iterations can execute concurrently while waiting for a response.

Here’s a diagram that visualizes the difference: 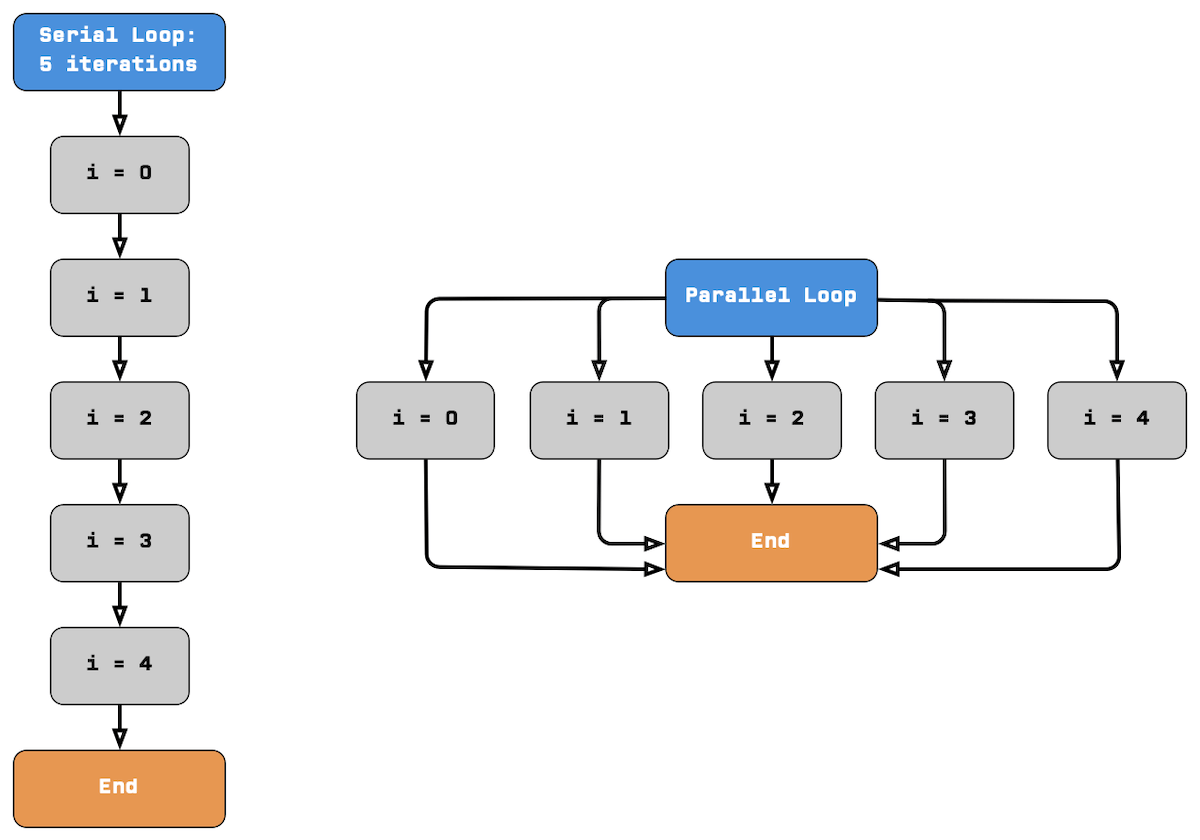 There are some cases in which it’s necessary to use a serial loop. If you need to mutate the original payload from one iteration to the next, or if you need the ability to prematurely end the loop, a seriallLoop might be your best option. However, we encourage you to adjust your workflow as needed to facilitate parallel loops where possible.

Losant is powered by a full REST API. The Losant API Node allows a workflow to utilize this API to access any resource under an application.

Since the Losant API Node has to make a full API request that leaves the private Losant infrastructure, this introduces an additional time cost. Therefore, native nodes will almost always outperform equivalent requests made through the Losant API Node.

Let’s see how they perform in comparison to each other: 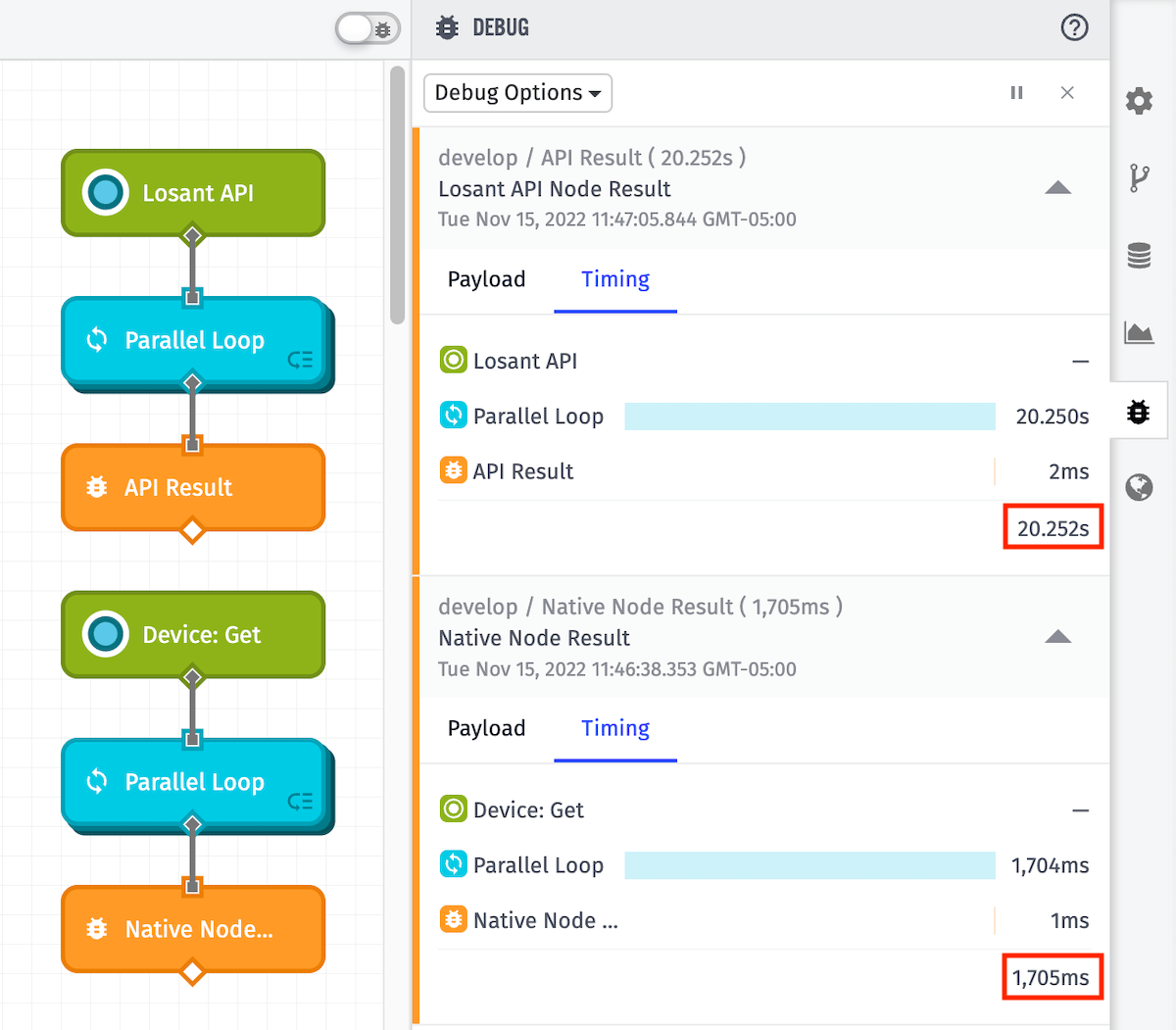 When building out your workflows, spinning off heavy processes across multiple triggers and/or parallel paths will generally be more efficient than stacking them sequentially.

The below diagram demonstrates breaking down a heavy process (on the left) into multiple paths that run in parallel (on the right): 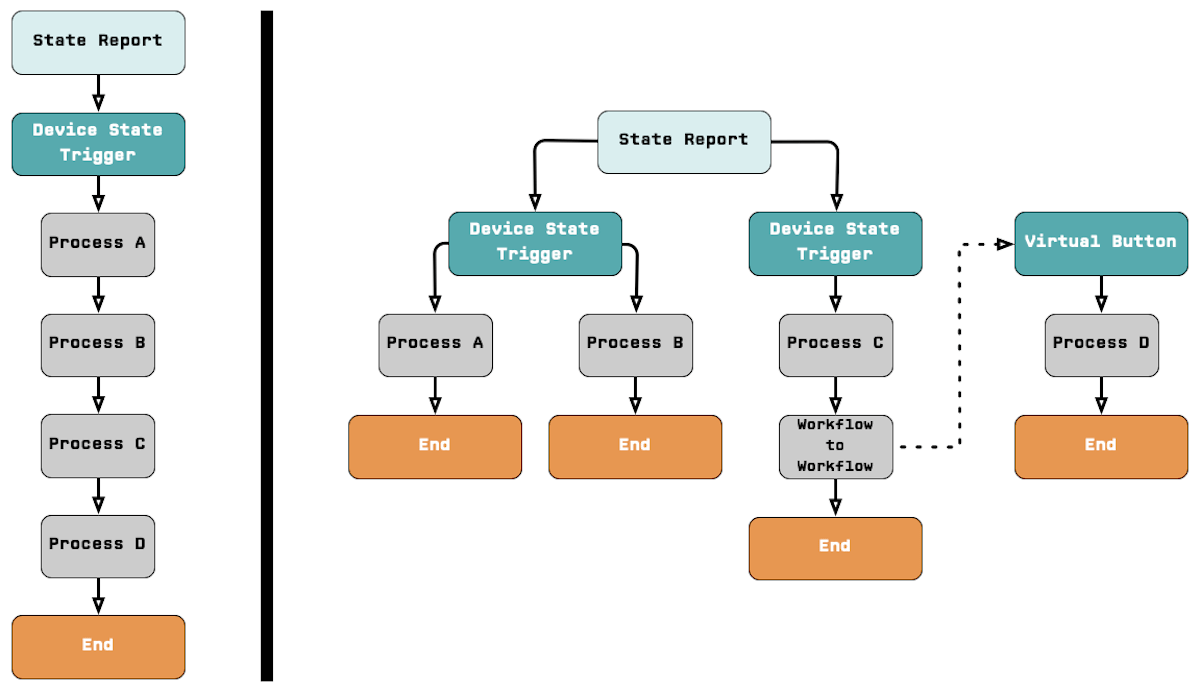 The efficiency improvements realized by making these changes vary considerably from workflow to workflow. In addition to improving performance, this can keep a workflow from timing out.

This is a relatively heavy process, with each invocation of the AWS: Lambda Node taking ~500ms or longer.

In our first workflow, we’re going to stack all of these nodes sequentially, including those within the loop (superimposed in the middle below): 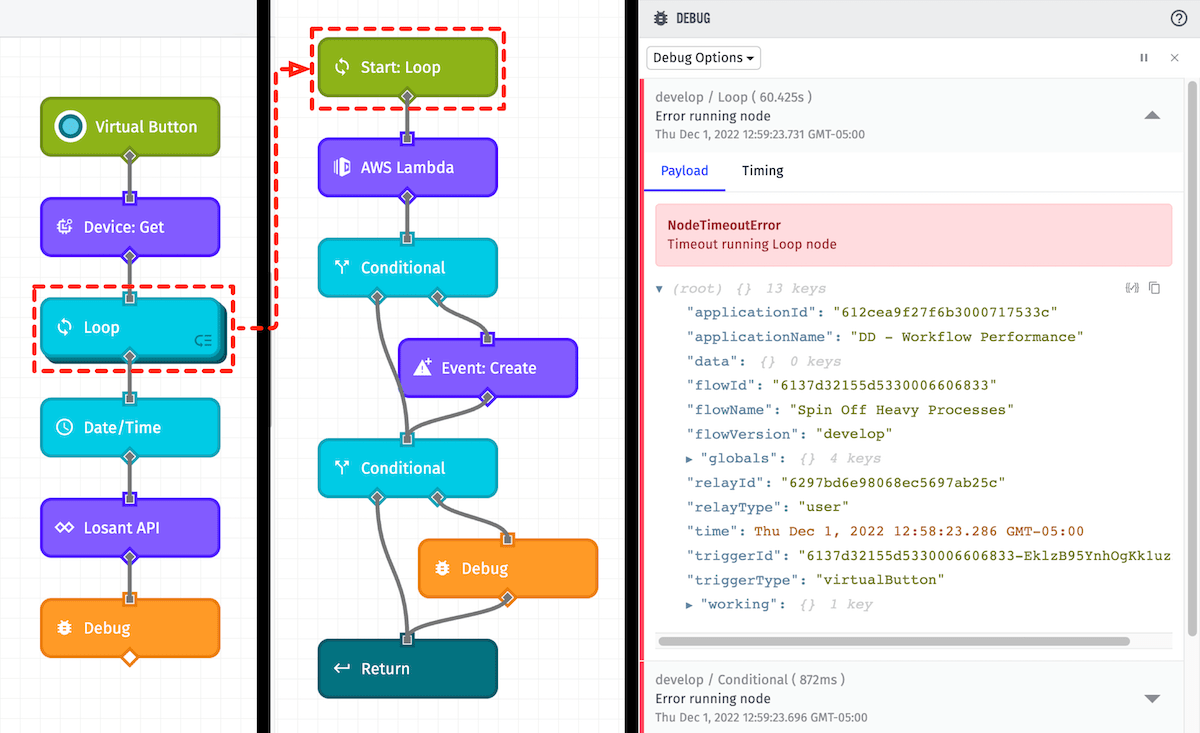 The above workflow timed out at 60 seconds before it could complete successfully. Let’s see what we can do to break it down into several parallel processes. In the workflow below, we’re going to make the following changes:

Now we can see that the workflow completes successfully!

Note: For background processes that involve iterating over a collection of devices, we recommend evaluating Resource Jobs as a potential solution.

You can cache responses from third-party services using Workflow Storage. If a value needs to be referenced multiple times across a workflow, this will help to reduce the number of API calls. It’s generally best practice to use Workflow Storage to cache API responses when relevant to your workflow.

To demonstrate the difference in performance, let’s first look at a new request to a third-party API using the Losant API Node: 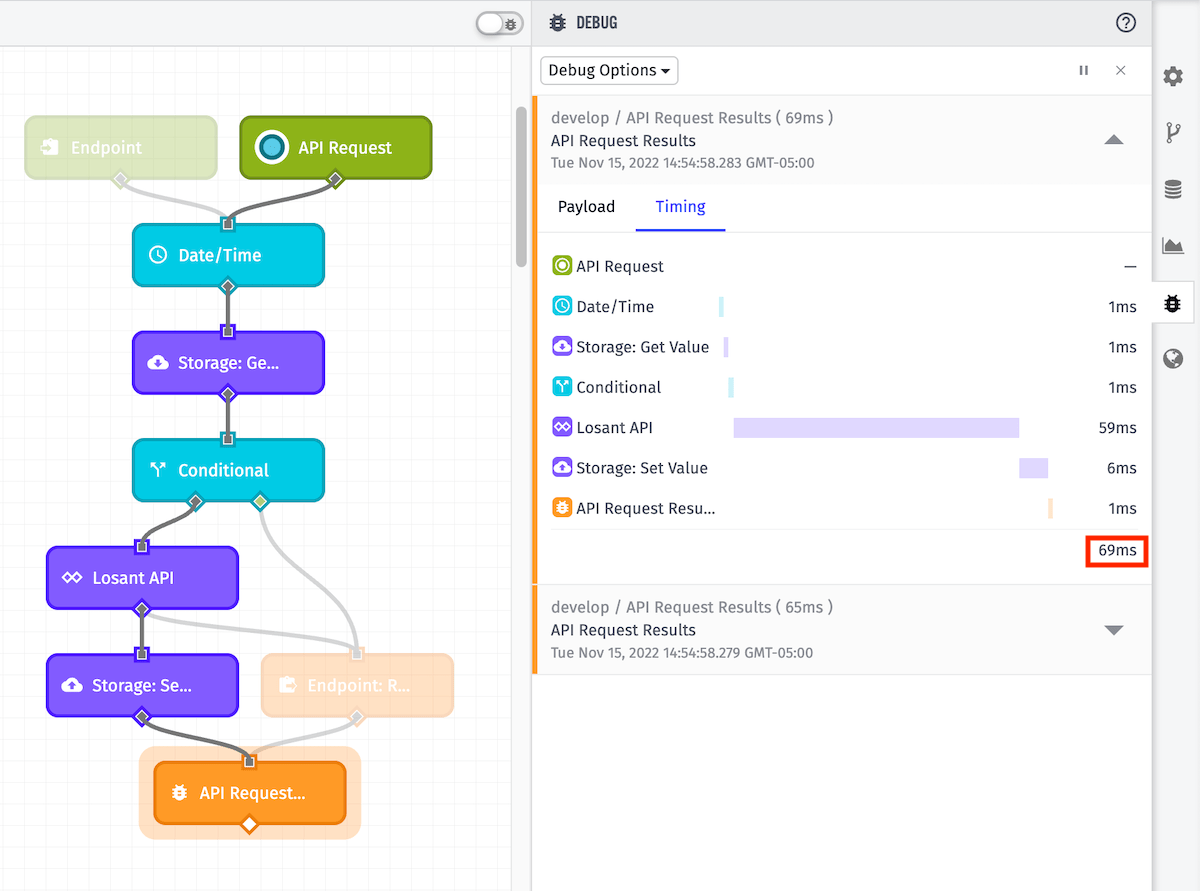 Now, let’s pull the returned value above from Workflow Storage, rather than re-requesting it through the API: 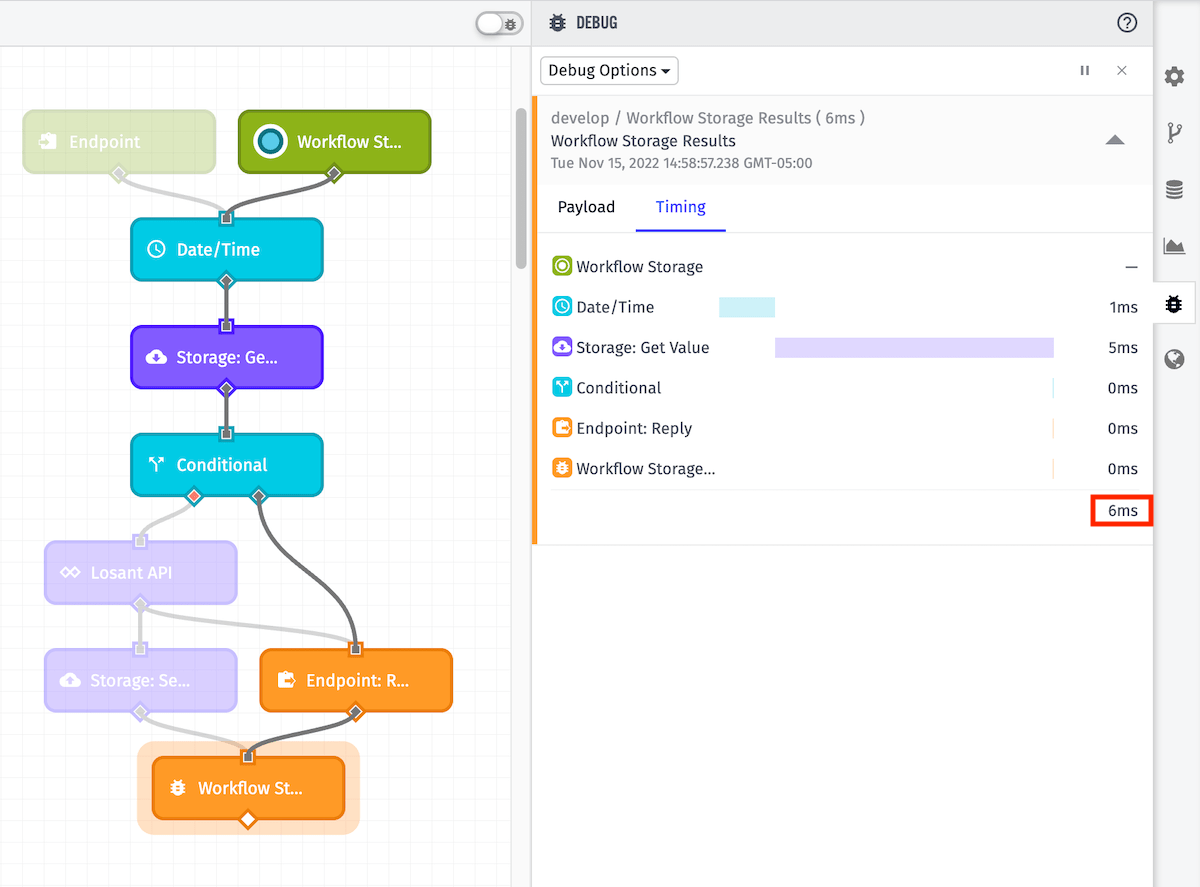 The completion time dropped from 69ms to 6ms.

The Device: Get Node has a number of different query methods available. Smart usage of these options can result in improved workflow efficiency.

First, select a query method that can return multiple results (all options other than Device ID). This reveals the Results Configuration section. Then, check Return multiple devices?: 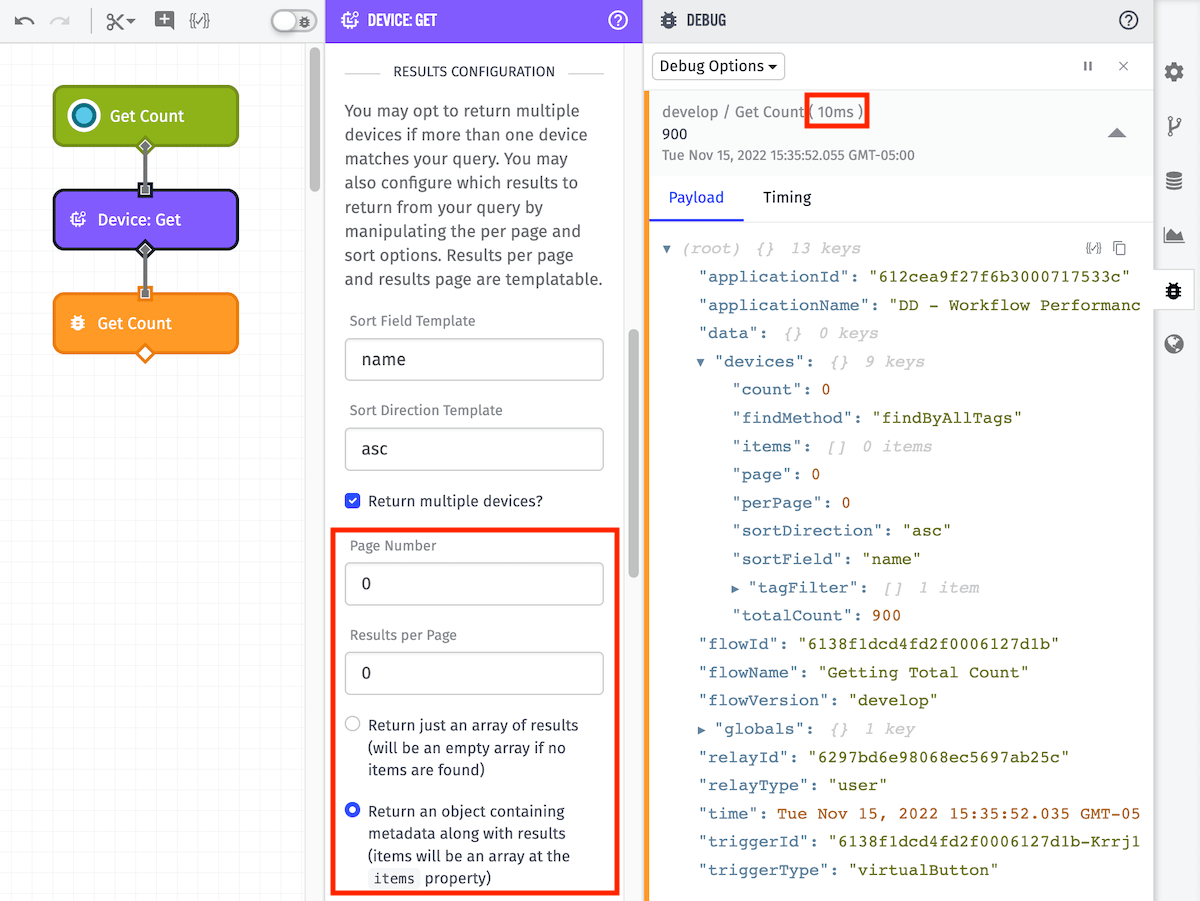 In the above configuration, we’ve set the Page Number and Results Per Page to 0, and selected Return an object containing metadata along with results. As we can see in the Debug tab (under devices), we have a totalCount value of 900. No other device details are returned. We can also see this request processed in 10ms.

Alternatively, if we were to request an array containing the details of all devices matching our query: 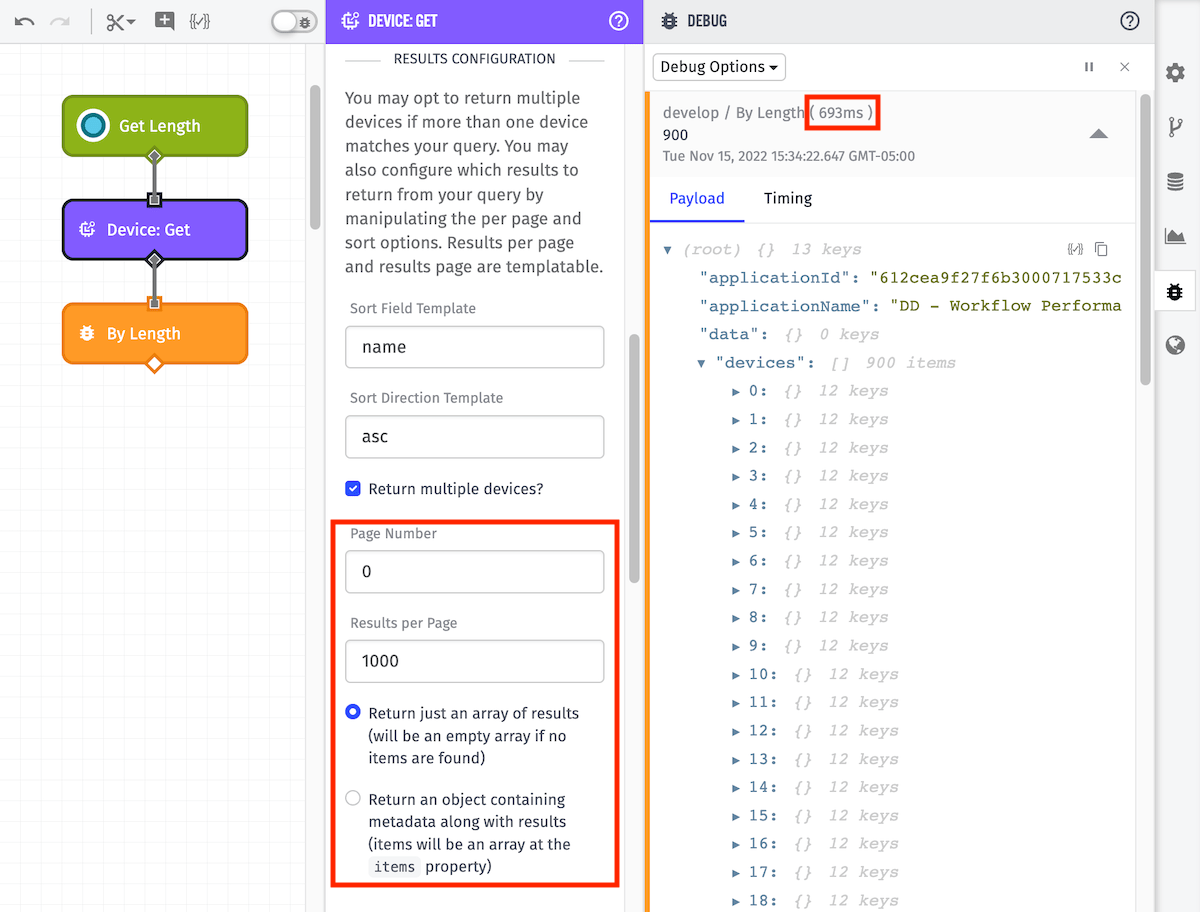 In this case, we’ve set the Page Number to 0, the Results Per Page to 1000, and selected Return just an array of results (will be an empty array if no items are found). Our Debug tab now shows an array containing 12 keys for each of the 900 matching devices. As expected, the processing time has also increased to 693ms.

The Device: Get Node has an option to include the most recently reported device attributes in the result path. This is referred to as Composite State and is configured in the Result section. As we’ll demonstrate below, it’s more efficient to not include Composite State when it’s not needed.

The default option is Include no attributes, which will obviously not include any device attribute data: 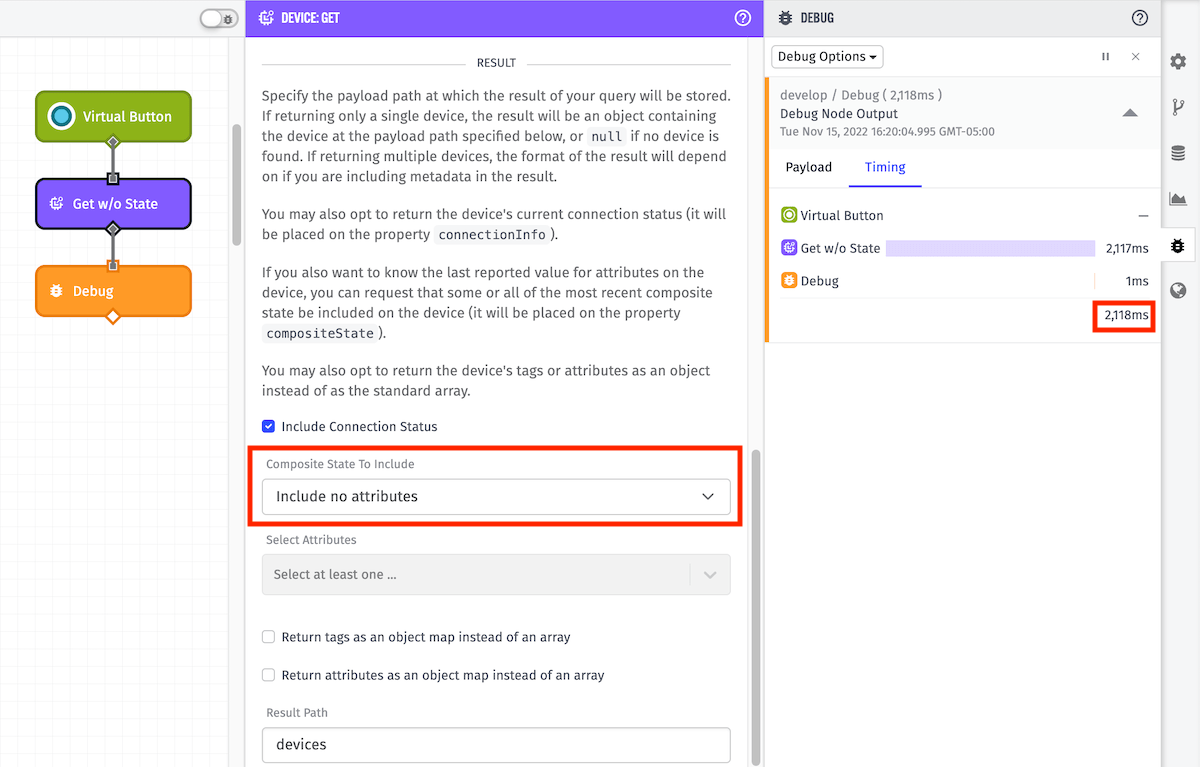 If you want to return Composite State in your result path, you can select Include all attributes or Include the following attributes: 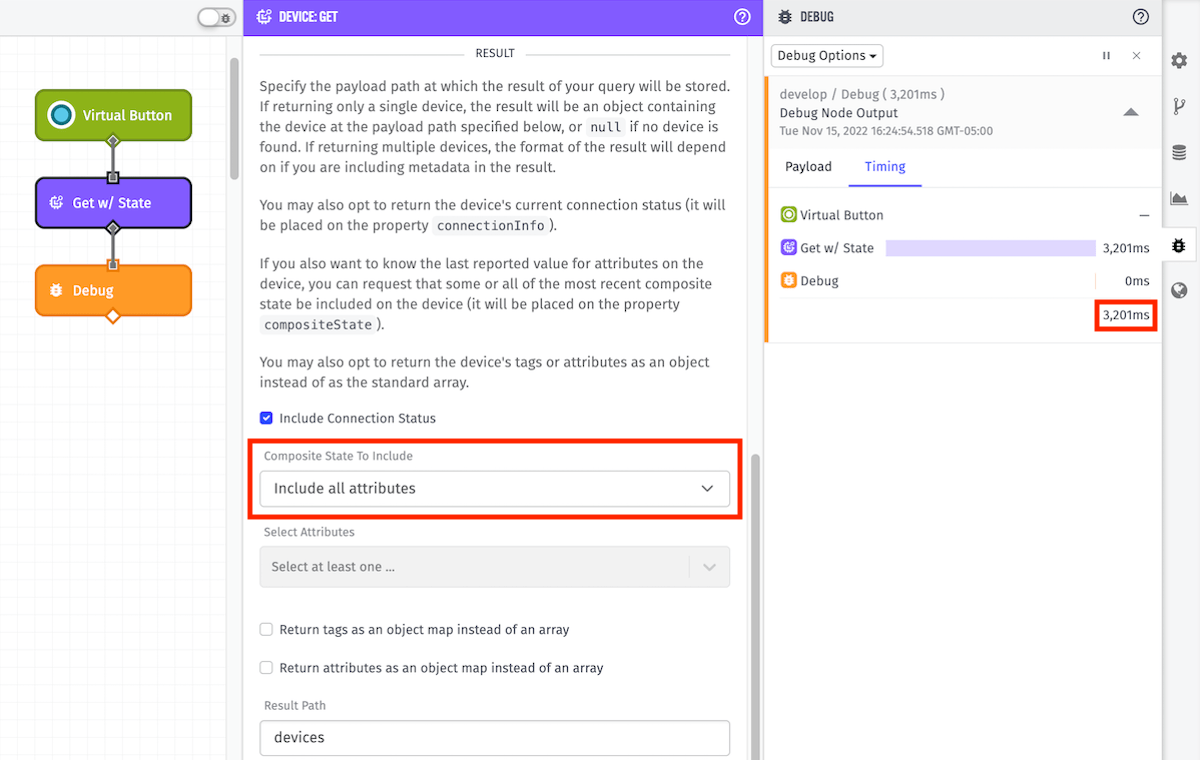 As we can see in our example, processing time increased from 2,118ms to 3,201ms when including Composite State.

Losant is constantly working to improve the usability and performance of our platform. We look forward to sharing these new features with you as they’re released. To wrap-up for now, a few key points: