Custom Nodes are wrapped-up groups of nodes that can be used in your application’s workflows. They can take input from the workflows calling the node and return values to be used later in those workflow runs. 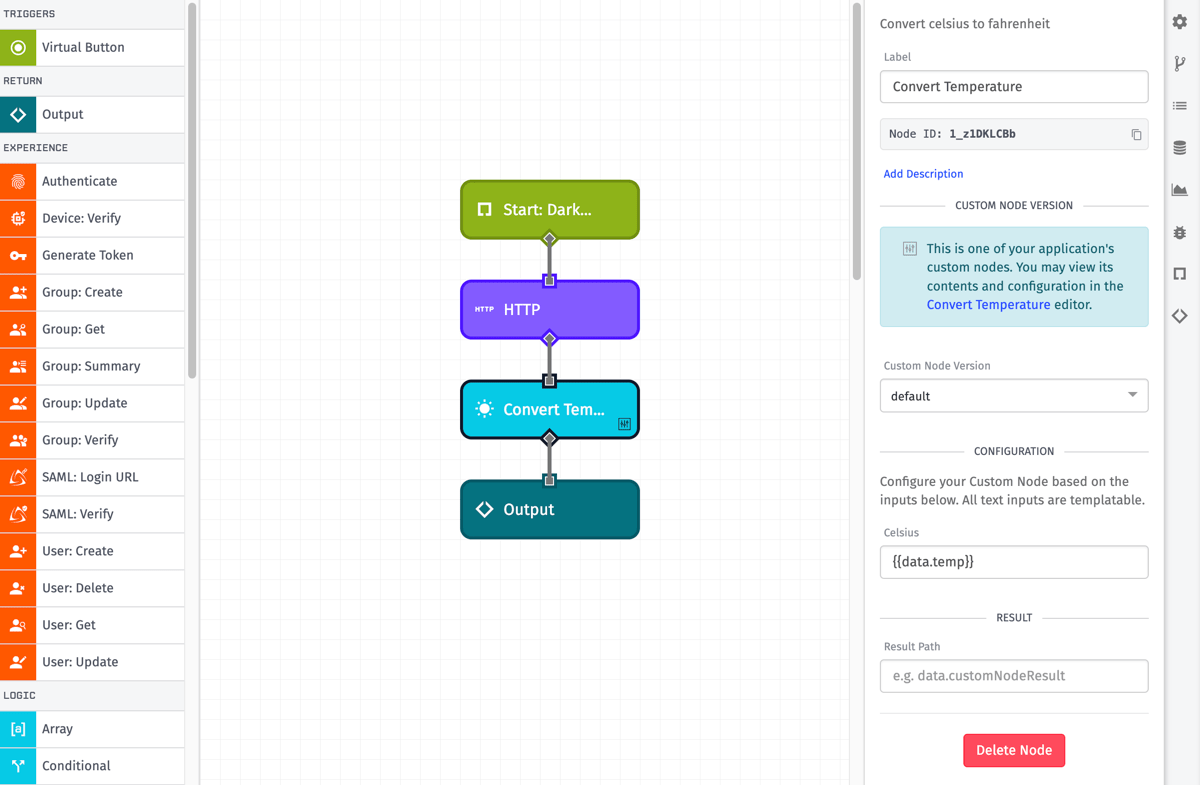 Custom Nodes allow for reusing common methods (such as converting temperatures from Fahrenheit to Celsius), for packaging up existing Losant nodes to extend your application’s functionality (such as integrating with a third-party API like DarkSky), or for building a common user redirect framework in your application experiences.

Custom Nodes can only be used within application workflows or within other Custom Nodes.

A list of your application’s Custom Nodes can be found under the “Custom Nodes” link. From the list, you may add a new Custom Node by clicking the “Add” button in the top right corner.

If you have an exported Custom Node file, you can also import that Custom Node into your application by clicking the “Import” button and selecting the file. Losant has a catalog of useful nodes available on GitHub.

All of these properties are version-specific unless otherwise noted.

Custom Nodes take three properties related to its display in your application’s user interface. They are not version-specific; meaning, if you change these properties, they will change across all versions and deployed instances of your Custom Node. 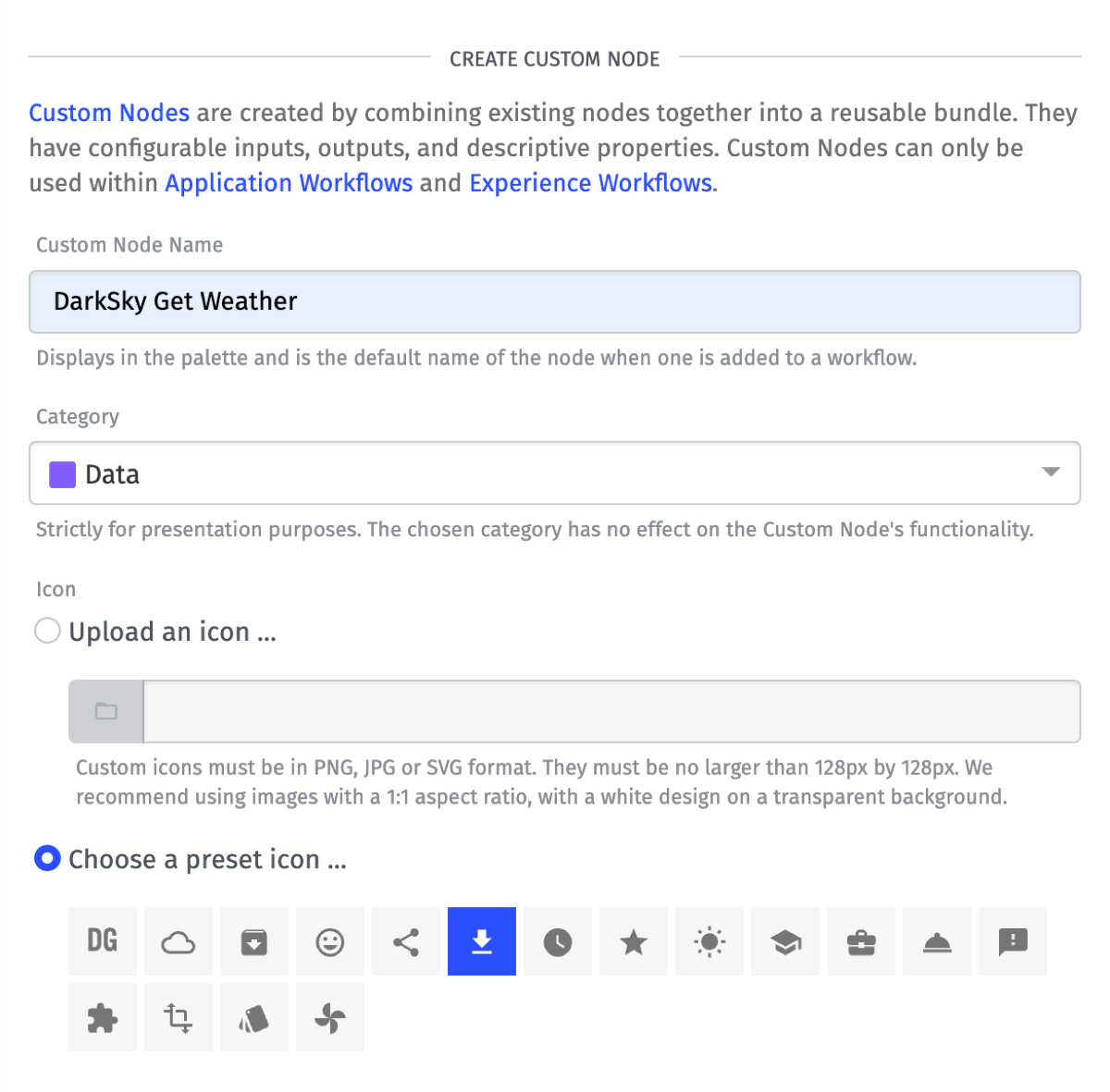 Your Custom Node can either have a single output, or it can have a branching output (like a Conditional Node) based on conditions you define.

For example, you might consider building a branching Custom Node if: 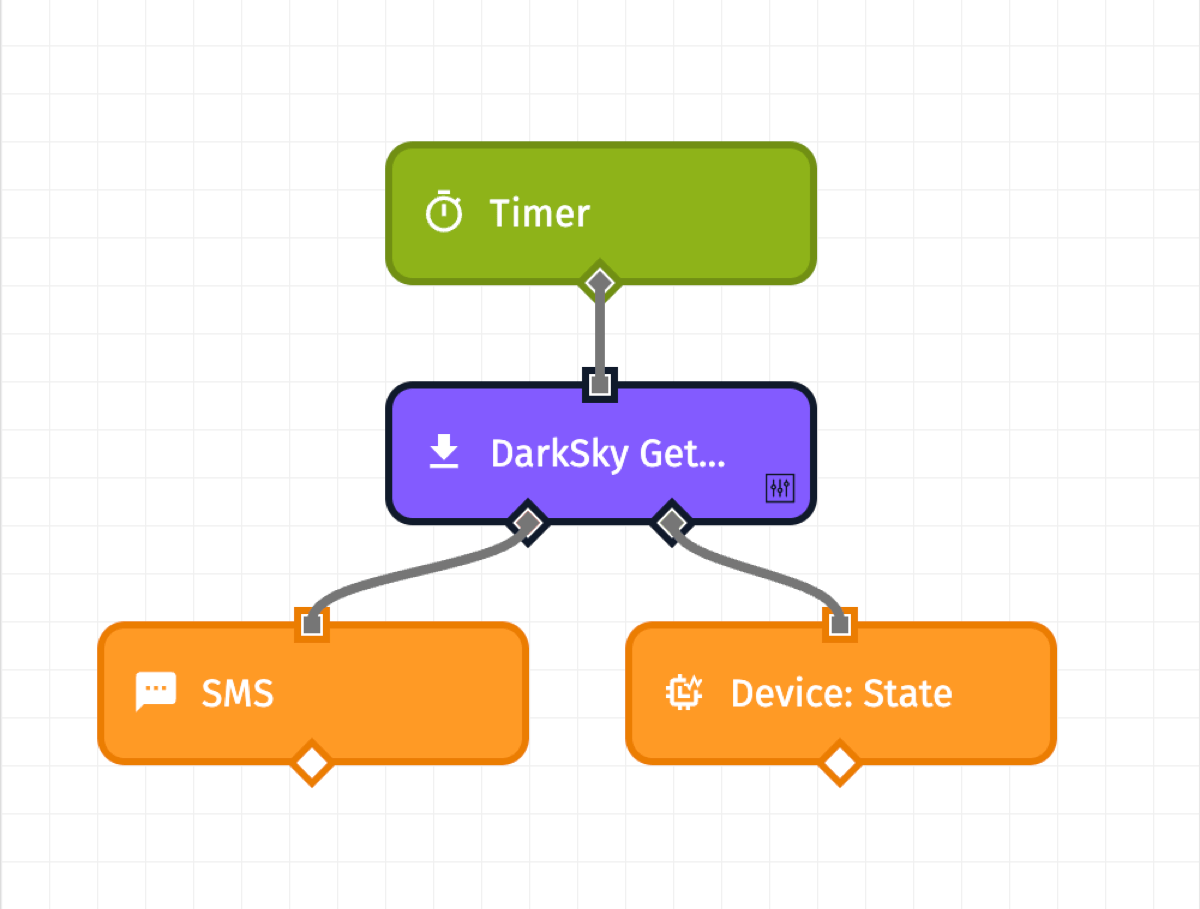 You can change the output type after creation in the Custom Node editor’s “Output” tab, but it will be much easier to craft your Custom Node if you decide whether you’re building a single output or a branching node before getting started.

Custom Nodes cannot manipulate the payload of the workflow calling the Custom Node (also known as the “outer workflow”), but they can return a result to a payload path of the user’s choosing. The outer workflow can then use that result as it continues its run. 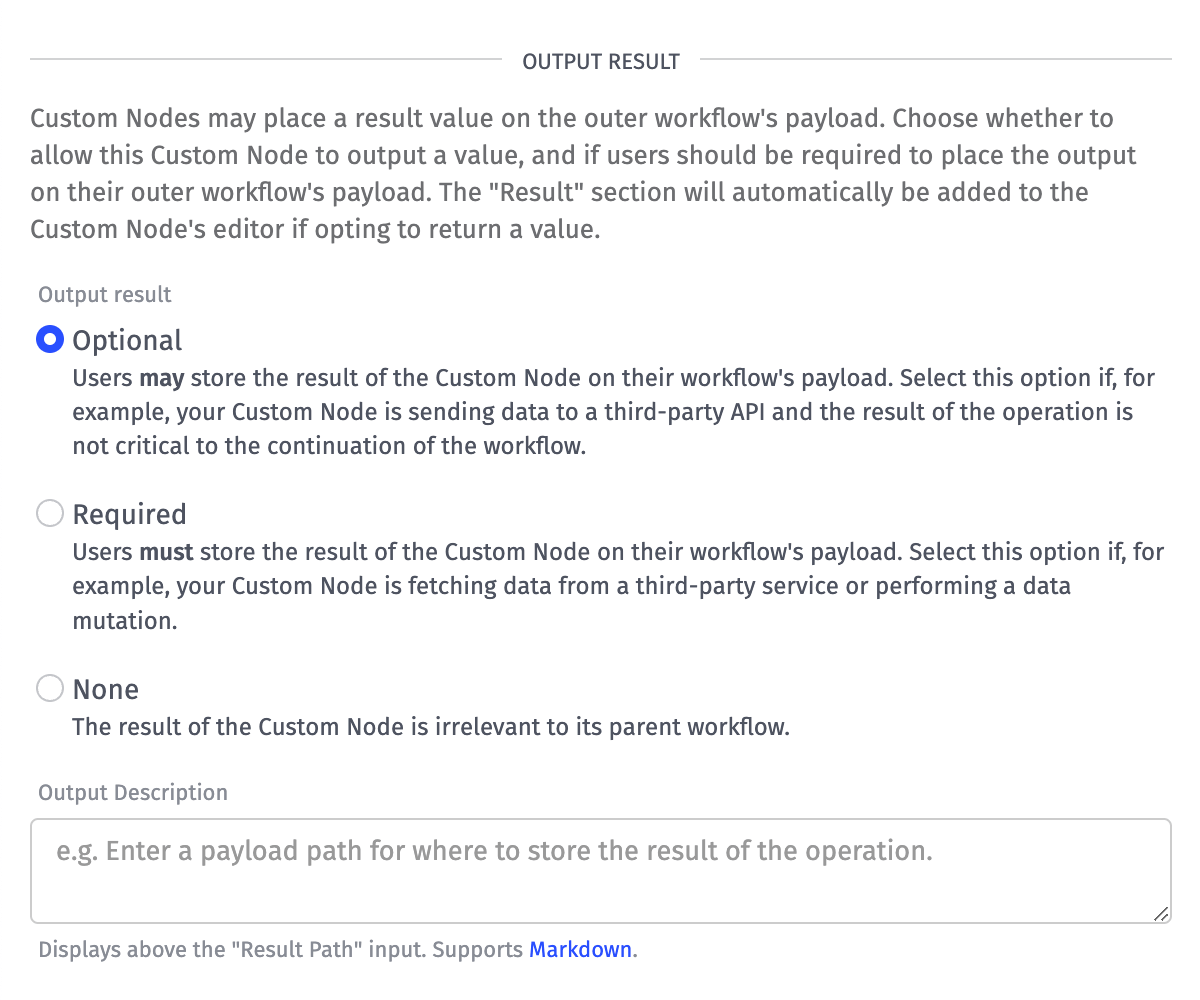 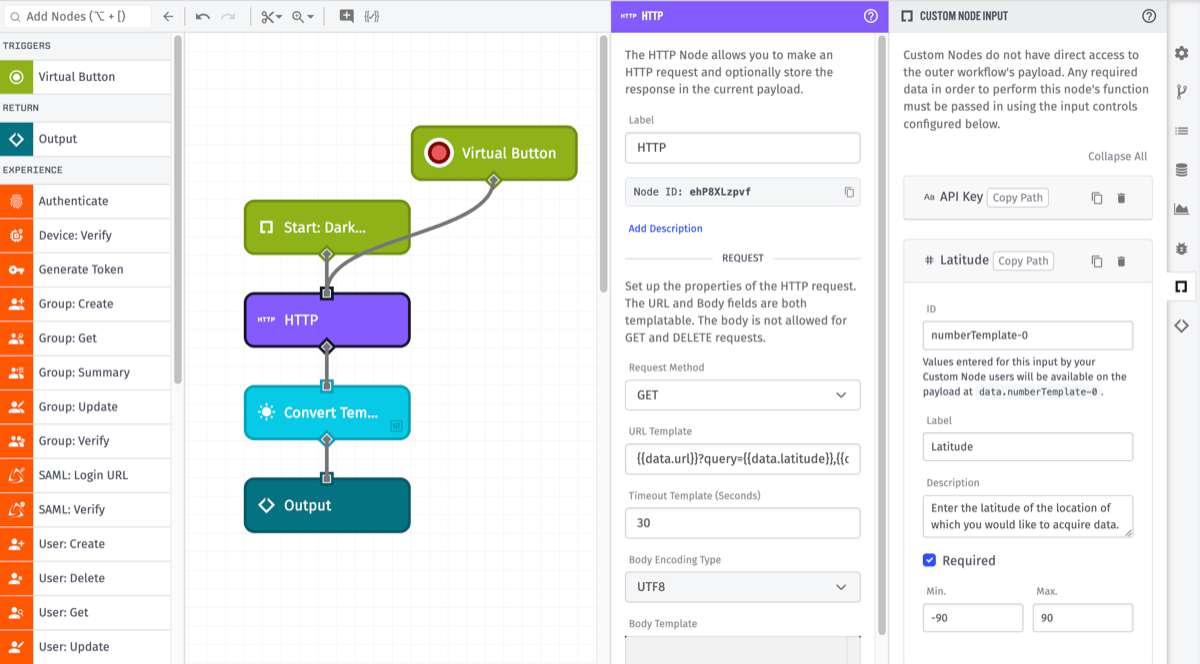 Each of these inputs requires a custom, unique ID, and the values provided by your users are available in the nodes that make up your Custom Node at the payload path of data.THE_UNIQUE_ID. Each field also requires a label and supports an optional description, which allows you to provide additional information about the data requested. The fields can also be sorted via drag-and-drop, and some allow for input validation - which is checked in the workflow editor prior to saving. 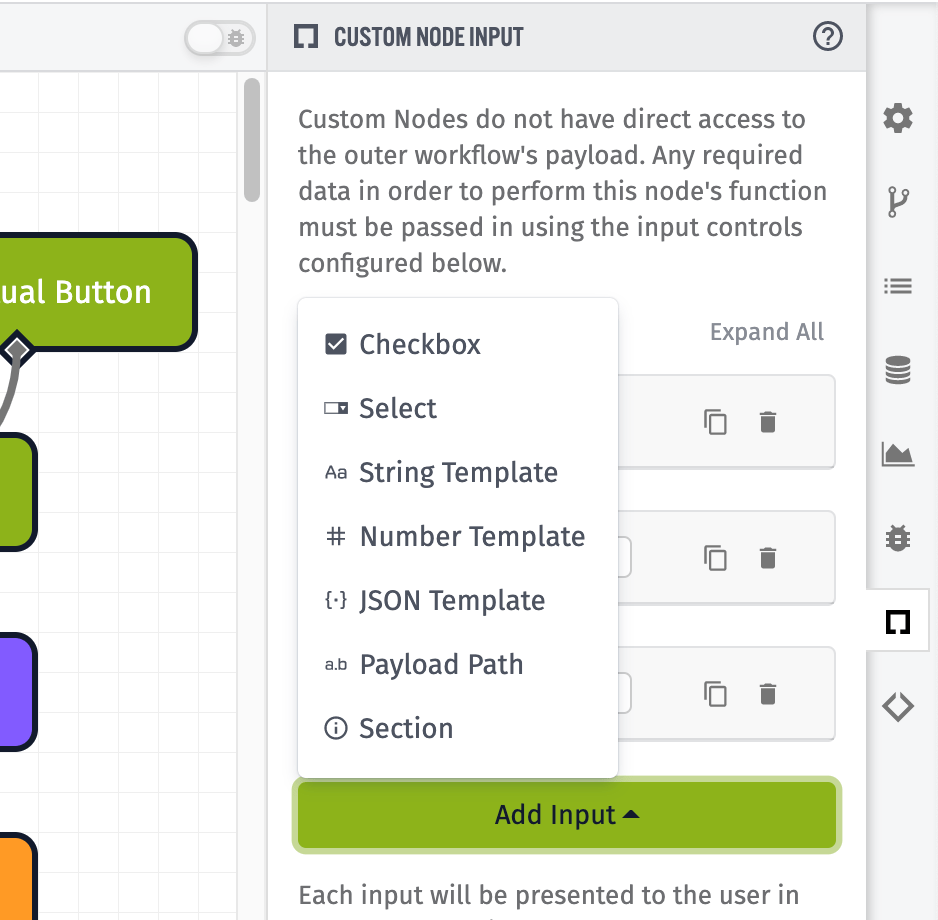 To add an input, click the “Add Input” button at the bottom of the “Inputs” panel and select the type of input you would like to add. Depending on the input type, each may also take some additional configuration properties:

Building a Custom Node is very similar to building a workflow; it is a combination of Losant nodes (and other Custom Nodes!) chained together to mutate data, make HTTP requests, branch your workflow based on payload conditions, and much more.

Despite the similarities, there are a few key differences between building Custom Nodes and traditional workflows:

Other than the Virtual Button (which is useful for testing your Custom Node), Custom Nodes do not support workflow triggers. Instead, the Custom Node has just one “trigger”, which represents the starting point of the Custom Node execution. 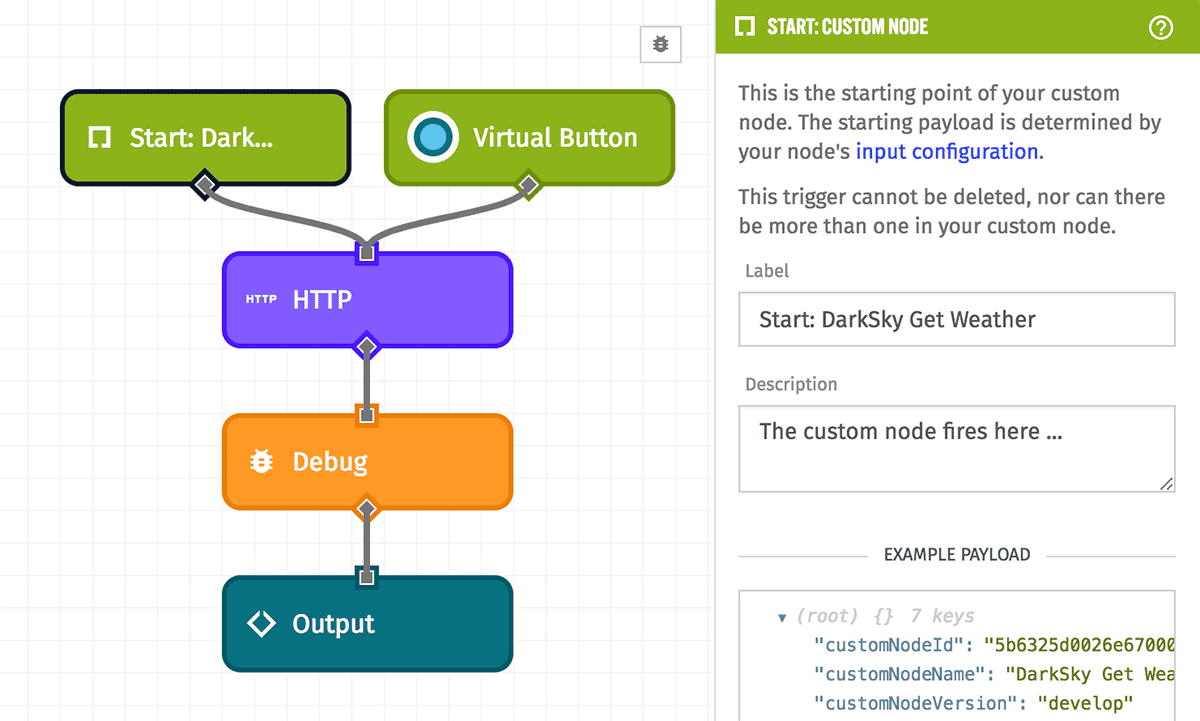 This trigger, like any workflow trigger, should be connected to additional nodes to run the Custom Node. It cannot be deleted, nor can more than one starting point exist on the Custom Node’s canvas. 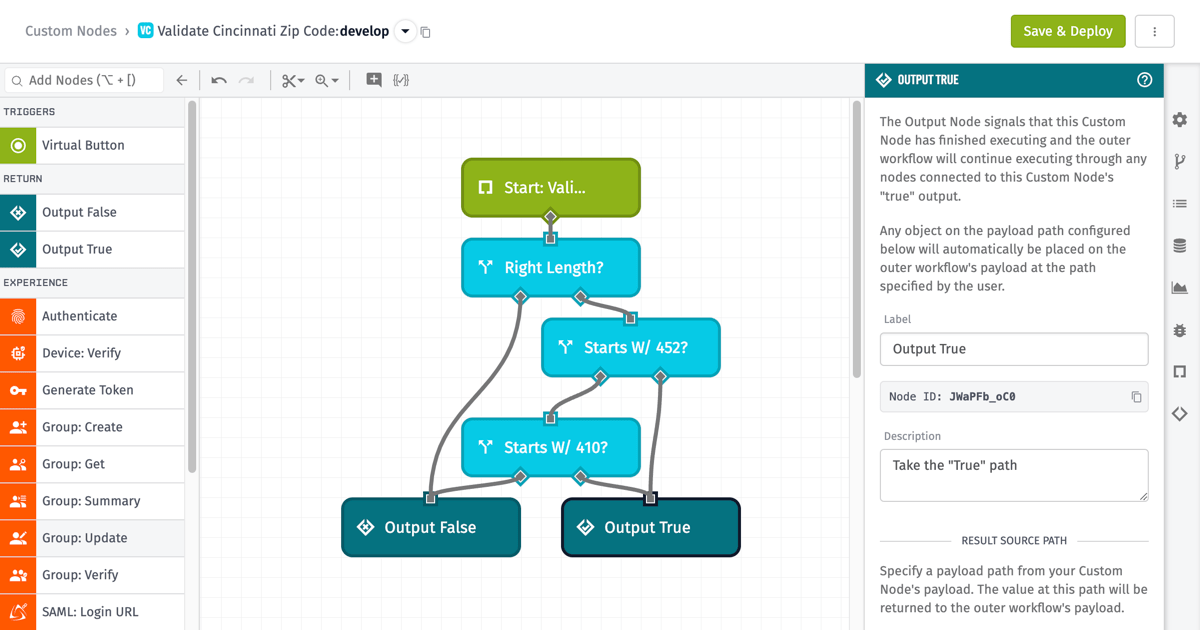 If your Custom Node returns a result, you will have to enter a payload path in the Return Node’s editor pointing to the value that should be returned to the outer workflow.

Note: Return Nodes can not be used in the contents of a Loop Node. They must exist at the root level of your Custom Node.

When using Custom Nodes, you must choose a version of the Custom Node to run. Since a Custom Node’s canvas, user inputs, output type and output result are all version-specific, your Custom Node’s functionality can differ wildly across versions. 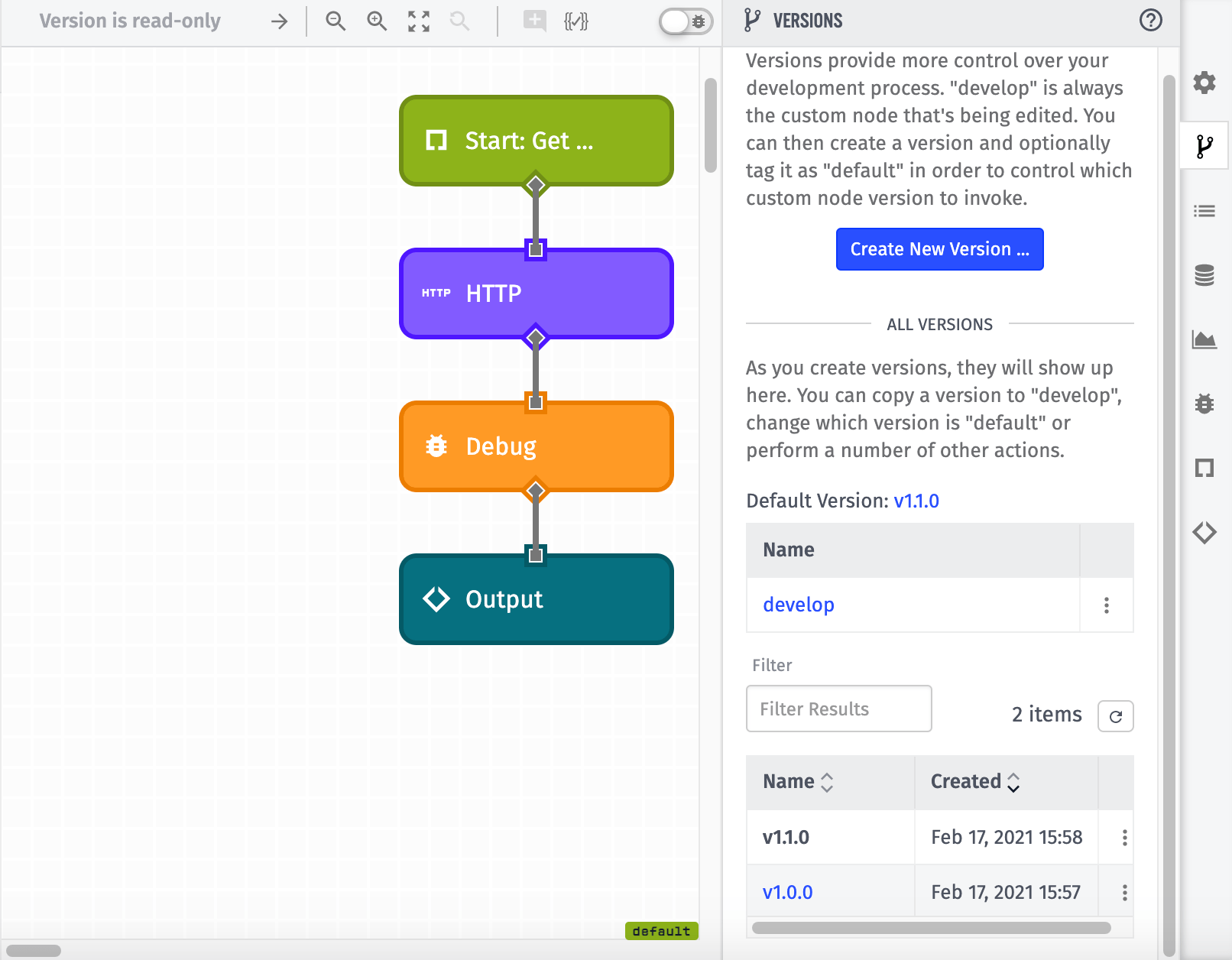 Creating and working with versions of Custom Nodes is similar to versioning as it works with Application Workflows, except Custom Node versions cannot be directly overwritten.

If you wish to make changes to an existing version, you must:

For production, we highly recommend you make another version the default as changes to “develop” can have unintended effects, as described below.

While it is possible to run the “develop” version of any Custom Node, we strongly recommend creating versions of your Custom Node and referencing the versions in your workflows.

Once a Custom Node has been saved and deployed, it becomes available for use within your application and experience workflows and other Custom Nodes. Your workflow palette contains a section with all of your application’s Custom Nodes. These nodes can be dragged onto the canvas, moved around, connected to other nodes, configured and deleted just like any other node.

Note: A Custom Node cannot be used within itself (otherwise known as recursion). This is to protect your Custom Node from infinite loops and workflow timeouts. Therefore, when editing your Custom Node, all other Custom Nodes within your application except that Custom Node itself will be available in the node palette. 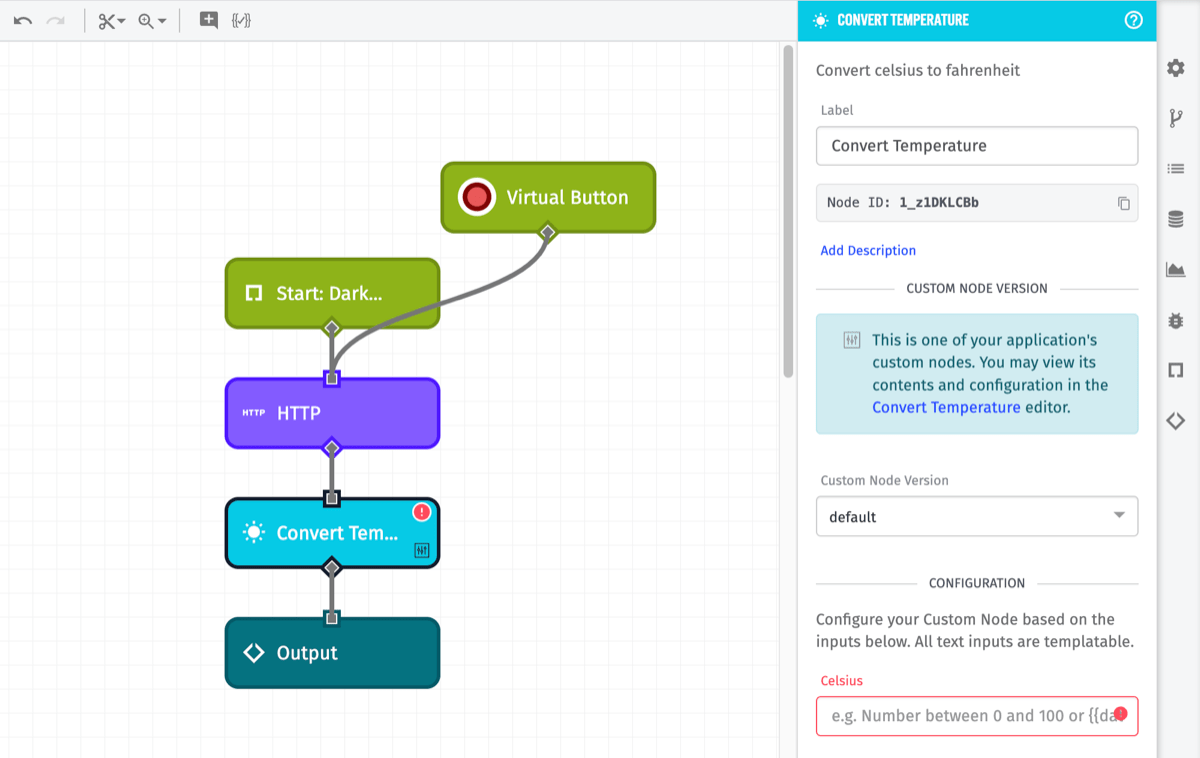 Beneath the version selector will be all of the user input fields defined for the Custom Node. Users of the node can input static values or reference values on their payload for each of these inputs (depending on the input type). Any validation rules configured for each input will also be enforced at this time, and just like with other nodes, the outer workflow cannot be saved or run until all of the Custom Node’s input validation is satisfied.

You can view a list of where your Custom Node is being used across your application by clicking the “Custom Node Usage” tab in the right sidebar. 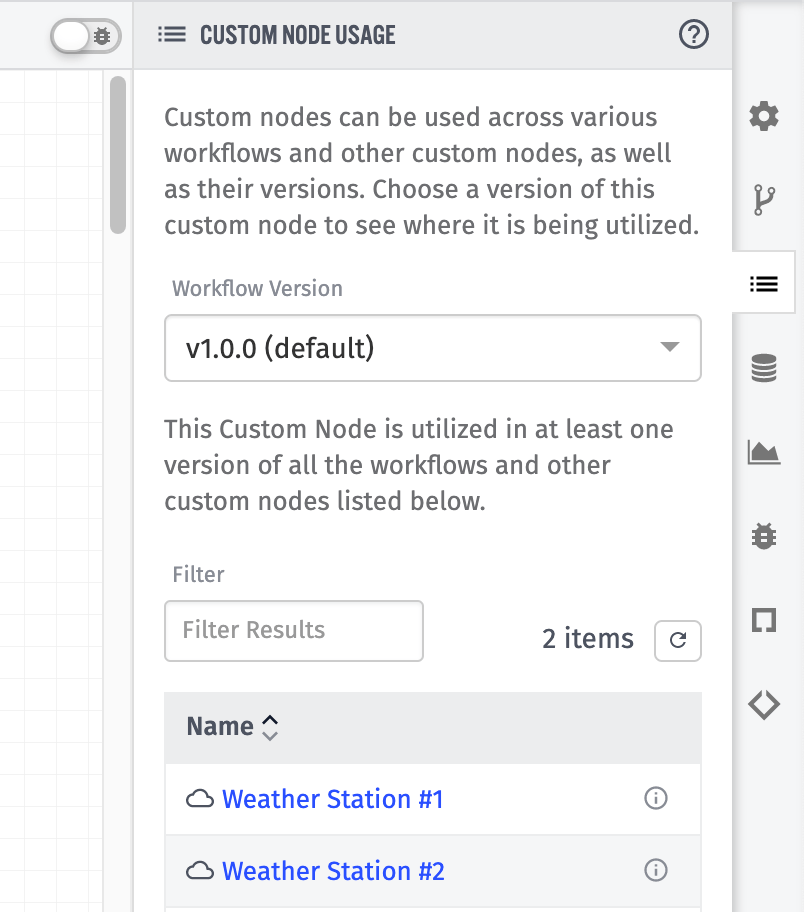 Optionally, you may select a specific version of your Custom Node, which will filter the table to only display workflows utilizing that version. 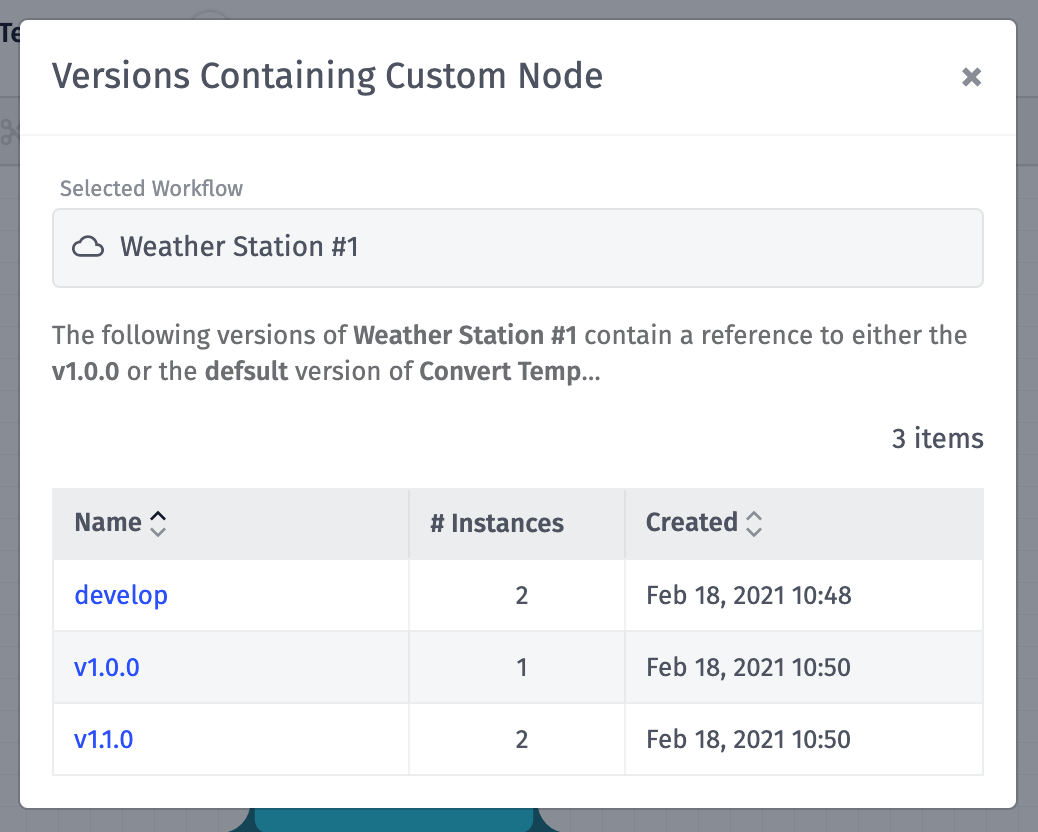 The Virtual Button is provided as a trigger within the editor for the purpose of testing your Custom Nodes. This trigger, in conjunction with Debug Nodes, allows you to visualize payloads as they move through your Custom Node and to view outputs corresponding to potential user inputs. 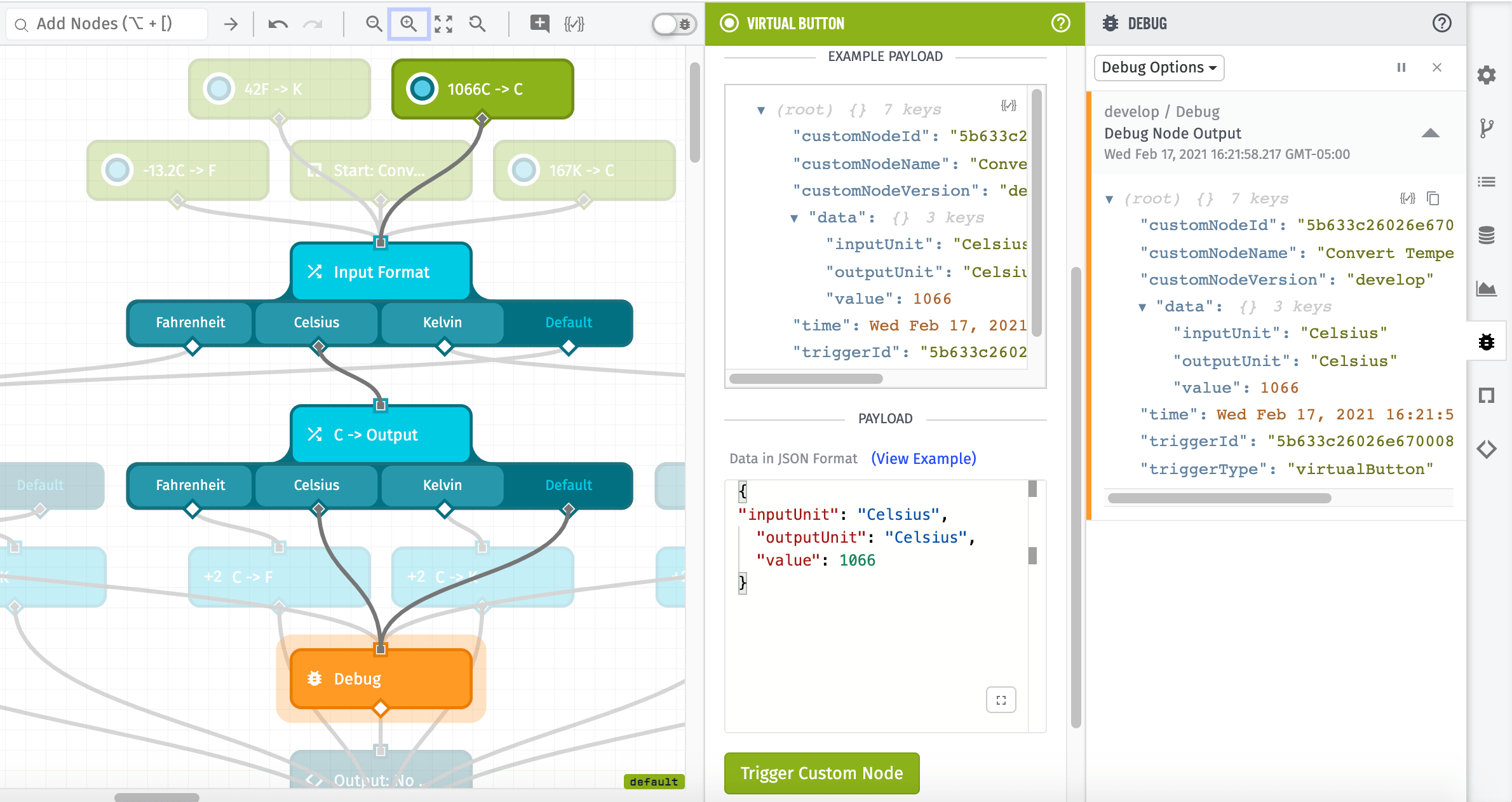 Just like with application workflows, debug output is available within the “Debug” panel in the workflow editor. Note that only debug messages generated by clicking Virtual Buttons will be visible here; payloads moving through your Custom Node as outer workflows call your node cannot be examined.

In order to delete a Custom Node, or a version of the Custom Node, that node / version must not be in use in any of your application’s workflows. Deleting such a Custom Node would cause your workflow to error and cease to function.

In order to export a Custom Node, first save and deploy a version of it. Then click the down arrow next to “Save & Deploy” to open the dropdown menu and select “Export”. 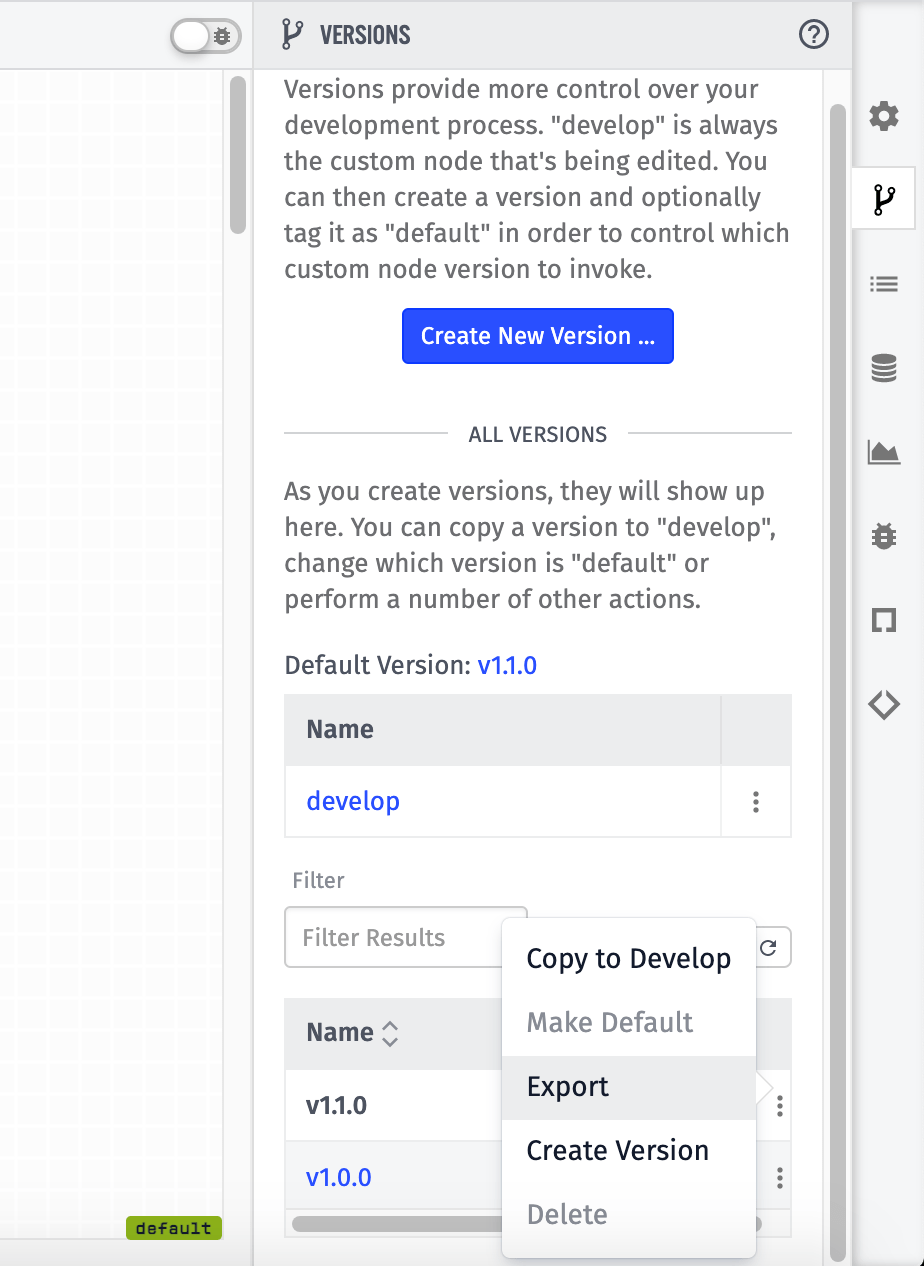 You can also export specific versions of a Custom Node by clicking the “Versions” tab in the right sidebar, clicking the down arrow next to the version you wish to export, and clicking “Export”.