Deployments can be managed on a per-device basis or a per-workflow basis. 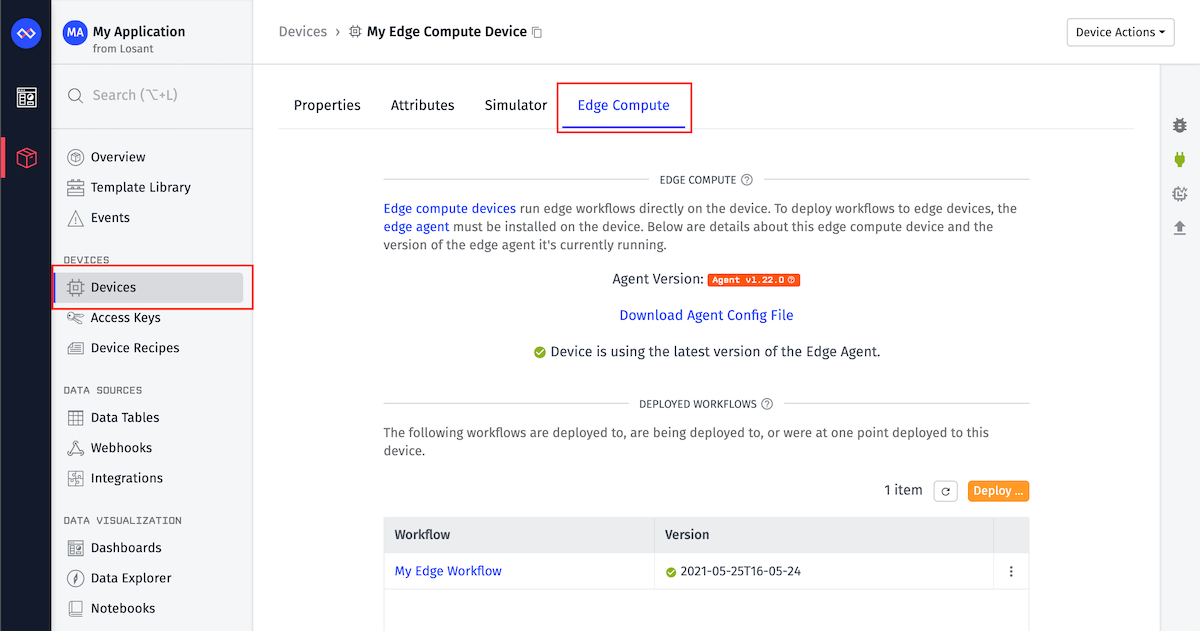 After selecting a device from your device list, click “Edge Compute” or “Embedded” (depending on the class of device selected) in the device’s tabbed navigation. This will bring you to a page where you can view the agent version currently deployed to the device, as well as a list of all workflows deployed to the device and their version status.

To create a new device deployment, click the “Deploy” button at the top right of the table in the “Deployed Workflows” section. A dialog will appear that will allow you to select a workflow, and then select an existing version of that workflow to deploy to this device. If you choose a workflow that is already deployed (or is scheduled to be deployed) to the device, you will have the option of changing the version of the workflow to use as if you had clicked the “Settings” icon for that workflow in the list below the button.

To edit an existing deployment, click the “More Options” icon in the last column of the row of the deployment you wish to edit. Select the “Change Version …” option. A dialog will appear that will allow you to change the workflow version or cancel a scheduled rollout.

To create a new deployment from a workflow, click the “Deploy …” button next to the “Save” button in the top right corner of the workflow editor. A dialog will appear that will allow you to roll out a deployment of the workflow version you are currently viewing. Select the devices using a device query (by name and/or by tag).

If you are viewing the “develop” version of your workflow, you will also have to create a new version to deploy. You may name your new version anything you’d like as long as it does not conflict with an existing workflow version. You may alternatively leave the name as the generated string of the current date and time that populates the dialog input by default.

When selecting your devices, you will also be presented with a preview of the devices matching your query, including their current deployment status for the selected workflow. If the version you are deploying is incompatible with the agent version on a device, the preview table will warn you of the issue; however, you will still be allowed to proceed with the deployment.

After you press “Deploy Version,” the dialog will change to show the deployment status of each device: 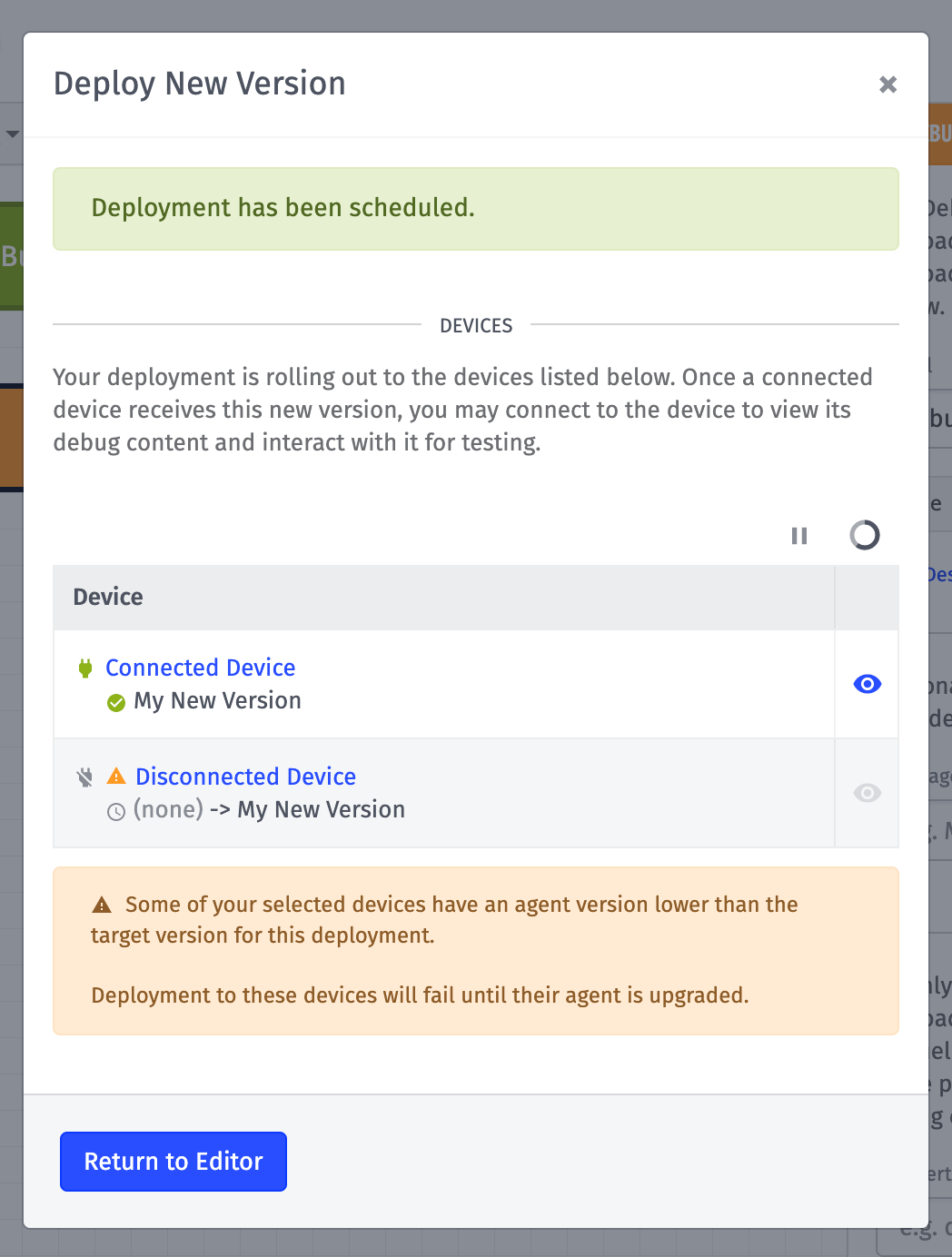 For each new deployment that is up to date, you may view the Live Look by clicking the eye icon next to the selected deployment. Live look is enabled for a deployment if the icon is blue; otherwise, the icon will be grayed out and disabled. Note that some deployments may take longer to actually deploy to the device—the list of deployments will update every 5 seconds to stay current.

In the workflow editor, click the “Devices” tab to view a list of all devices to which any version of this workflow is deployed or is scheduled to be deployed. Each of these deployments can be edited individually by clicking the “Settings” icon in that row; the version can be changed, the rollout can be canceled, or the workflow can be removed from the device.

You may view the Live Look for certain devices by opening the “Devices” tab and clicking the “More Options” icon in the last column of the row of the device you wish to view. Note: You will only be able to view devices whose deployment status is up to date.

Multiple workflows can be deployed to a device; however, only one version of each workflow may be on the device at one time.

When viewing a list of deployments, the “Version” can be in one of three states: 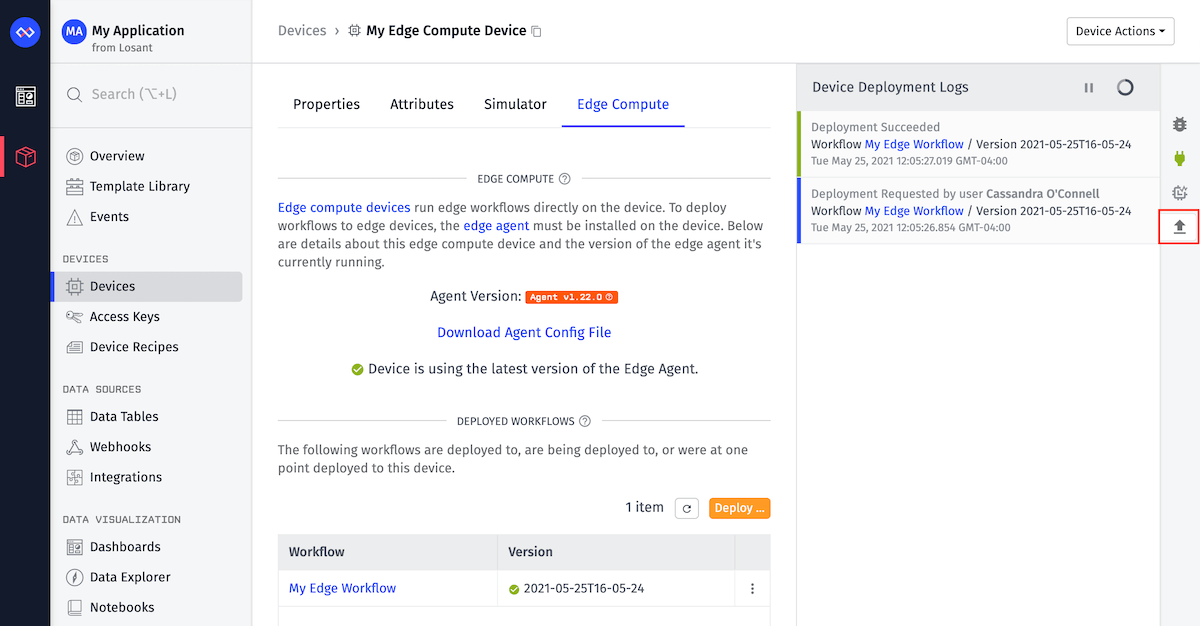