The File Tail Trigger allows you to monitor and analyze logs and other files on the Gateway Edge Agent’s (GEA) container or host file system. This trigger monitors new data being written to a file and fires a workflow whenever a configured delimiter or byte length has been reached.

In most use cases, this node works similarly to the Linux tail command when using the -f (follow) option. 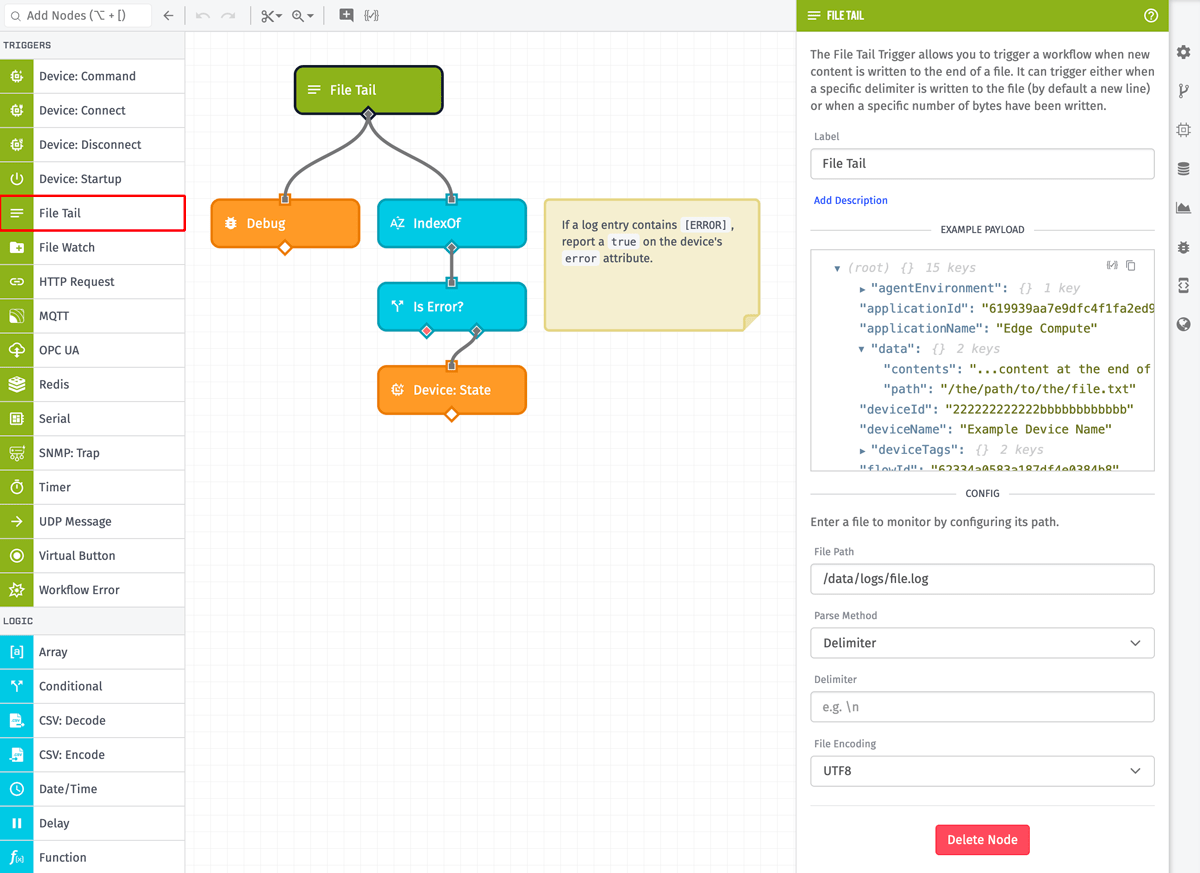 This property defines the full path of the file to tail (e.g. /data/logs/file.log). The GEA runs inside a Docker container, so this path is a location on the container’s file system. To access files located on the host file system, they must be mounted into the container using Docker volumes. For example:

Invalid permissions are a common issue when mounting files from the host to the container. In most cases, files located on the host file system cannot be accessed by the GEA without first changing permissions. For example:

You can verify that the GEA has correct access to the file by attempting to manually tail the file from within the container. The example below indicates that the file has not been granted proper permissions.

As new data is being received from the configured file, the Parse Method property controls when to fire workflows. The available options are:

When Parse Method is set to Delimiter, this property defines the character or string, that when received, will fire the workflow. The delimiter will not be included in the file content on the resulting payload. If no value is entered, the delimiter defaults to \n (line feed). When tailing log files, the most common delimiters are:

The delimiter field supports strings up to 16 characters in length. For example, if messages in your file are not delimited by a single newline character, but are instead delimited by a multi-character string (e.g. NEW_LOG_MSG), you can enter that string in this field.

When Parse Method is set to Byte Length, this property defines the number of bytes that must be received before firing the workflow. This option is commonly used to monitor files that contain binary data instead of text data.

When using the Byte Length option, the most common next step is to parse the raw binary data into meaningful values. First, the recommended Output Encoding is Base64, which results in the payload receiving your binary data in a format that’s easier to inspect and debug. There are several online Base64 decoders that you can use to inspect the data by copying the value from the debug output. The Binary encoding option also works, however, this results in debug output that can be less helpful.

Accessing the underlying byte data in your workflow requires the use of a Function Node and the Buffer Object. For example:

The Output Encoding property defines how the received data should be encoded before it’s placed on the payload. For text-based log files, the most common encoding is UTF8, which is also the default.

If you select Binary as the encoding option, the data will be added to the payload as a binary-encoded string. See Accessing and Parsing Binary Data for details on how to access the underlying byte data.

The trigger’s initial payload contains a data object with the file path and new file content. The content property is always a string that’s encoded based on your selected Output Encoding.