A device recipe is a template (or ‘recipe’) for creating devices. If you have many devices that are the same or very similar, you can use device recipes to make creating those devices much easier.

Device recipes can be found under Device Recipes in your application’s navigation.

When creating a recipe, you may either import a previously exported recipe, or you may manually configure the device settings. If taking the latter path, you will be able to configure the recipe’s finer details after choosing a name and initially creating the recipe. 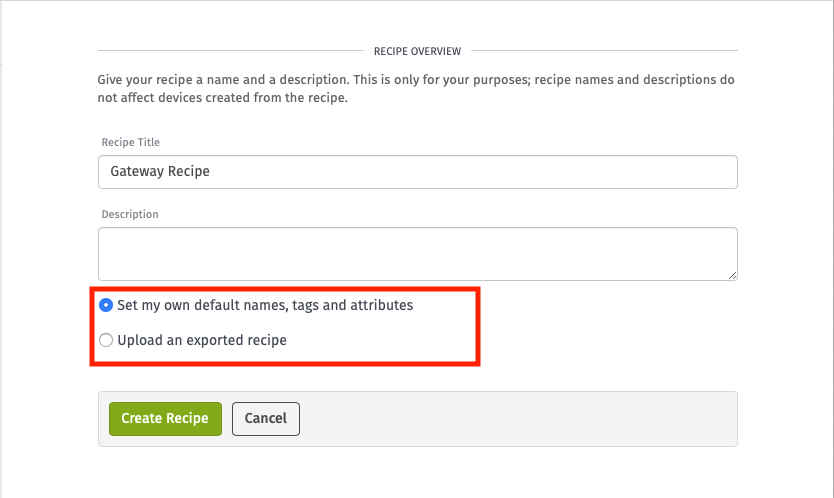 A device created from a recipe copies all of the properties and configuration of the recipe to the new device being created. One additional tag will be added to the new device - a tag with the name DeviceRecipe and the value being the name of the recipe used to create this device. You can remove or modify this tag if desired, it is only added to help with device organization.

NOTE: Modifying a device recipe does not modify devices previously created using that recipe. A recipe acts as a template only; once a device is created, it is an independent item with no actual link back to recipe used to create it.

Recipes can be exported and saved to a file using the “Export” button on the recipe edit page. Exported recipes can then be imported when creating a new recipe (instead of creating a recipe from scratch). This can be useful for sharing recipes with other users (or even just sharing recipes across applications).

To create a single device using a recipe, navigate to Devices. From there, you can click the dropdown button next to Add Device and select Create From Recipe. 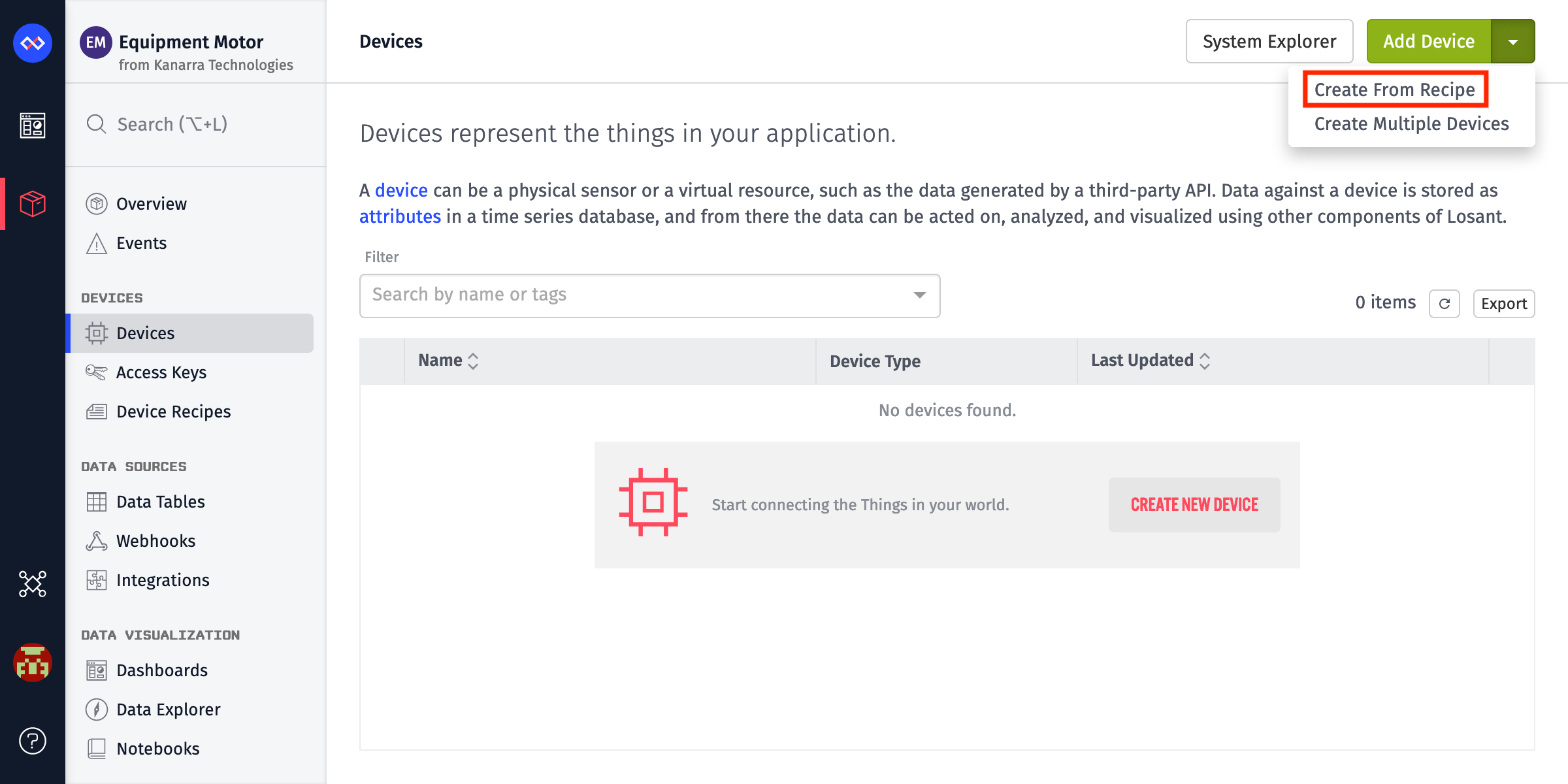 To create many devices at once using a device recipe, you will want to use bulk creation - which is available as an option under the dropdown button next to Add Device.

To create many devices at once using a device recipe, navigate to Devices. From there, you can click the dropdown button next to Add Device and select Create Multiple Devices. If the number of devices you are creating is more than 750, then instead of navigating to a page with a table of the output of the generation, you will receive an email with a link to download a CSV with the results of the generation. This CSV contains the same fields as the results page shown below. 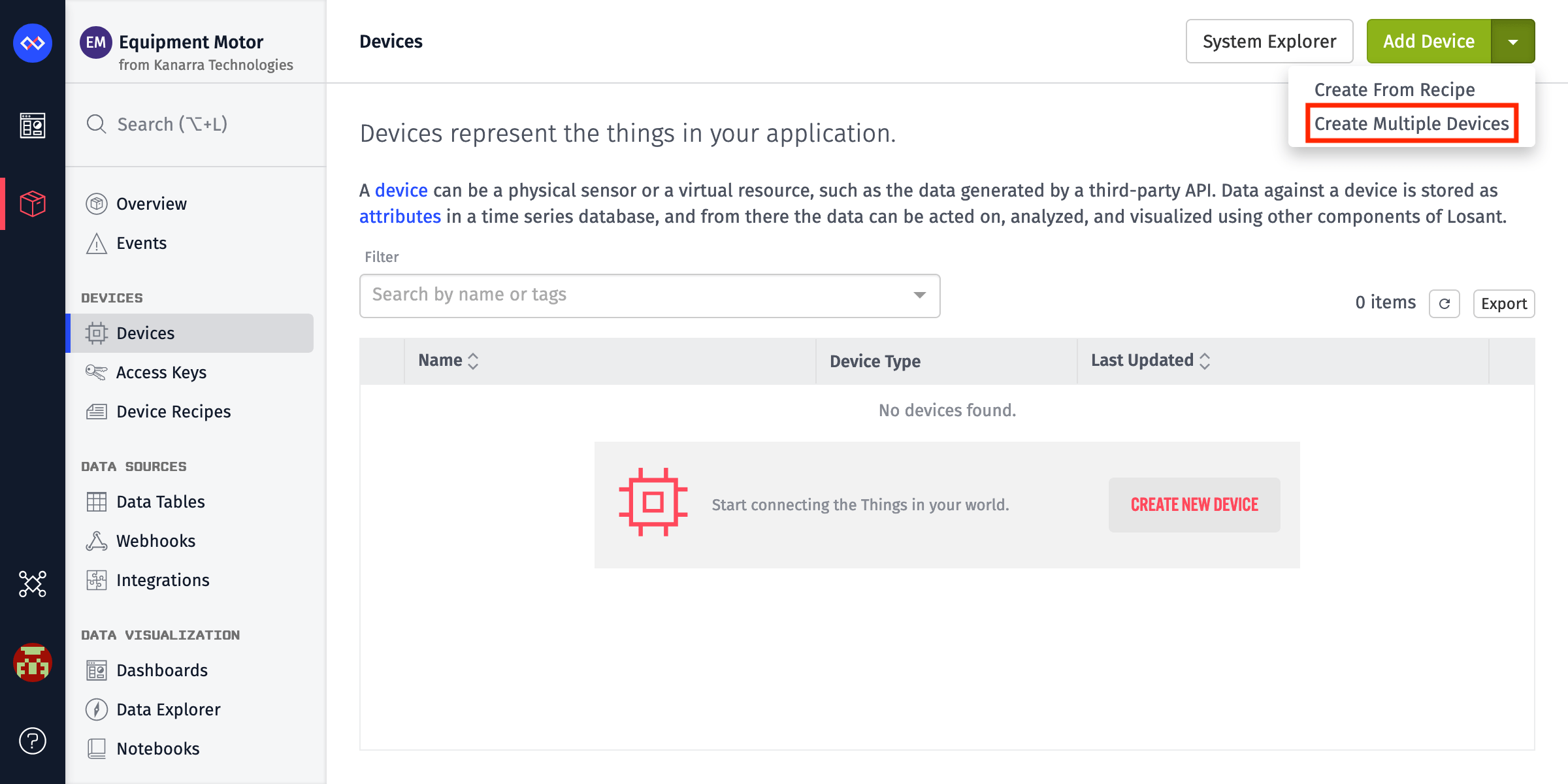 You can then select which recipe to be used to create the new devices.

Once you have selected a recipe you will be given two choices for creating multiple devices. The simplest is choosing a number of devices to create straight from the selected recipe. 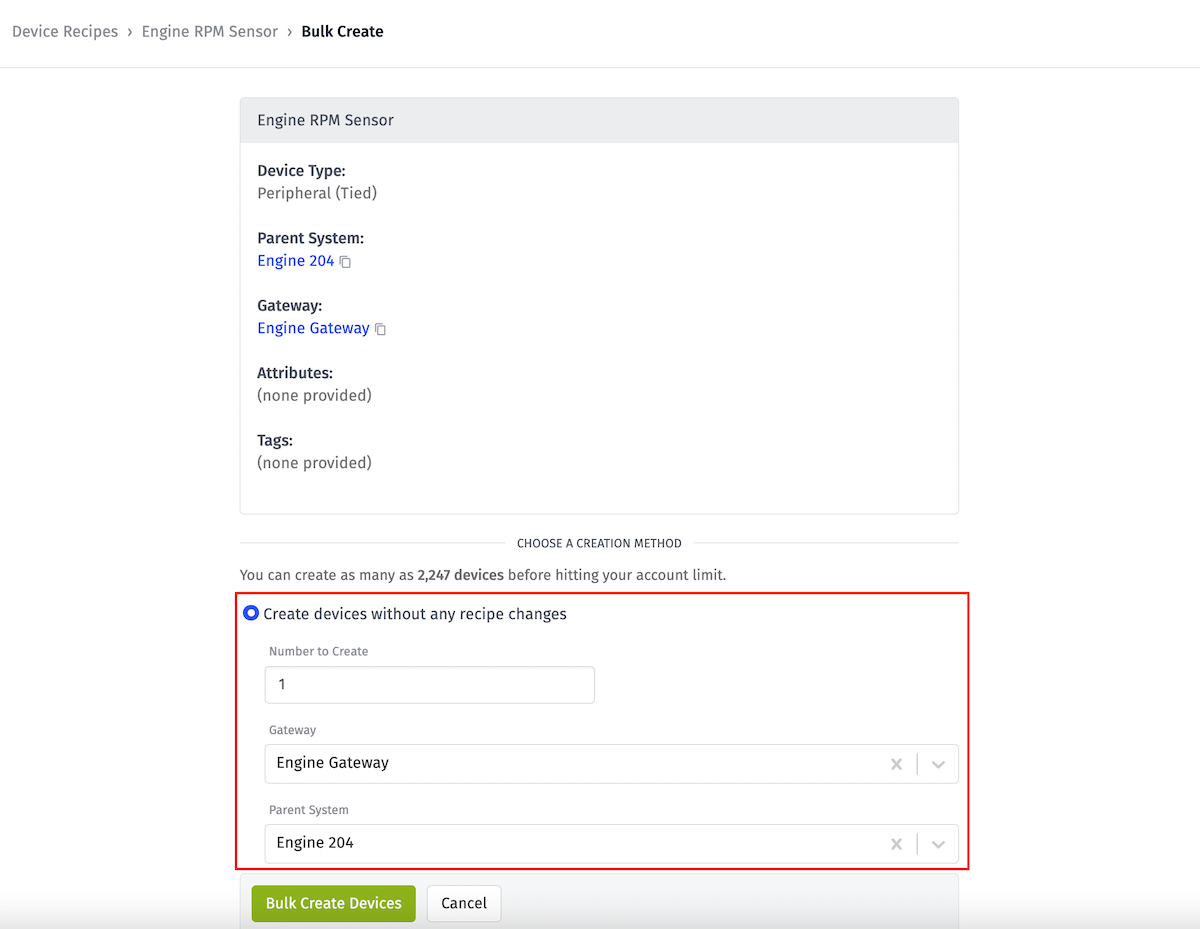 When using this option, the devices will be created as exact copies of the recipe - except for the name of the device, which will get an incrementing number on the end of the name to allow differentiation of the created devices.

The second choice when bulk creating is to upload a CSV file of device information to use when creating devices. When you choose to upload a CSV, Losant will show a preview of what will happen when the devices are bulk created. 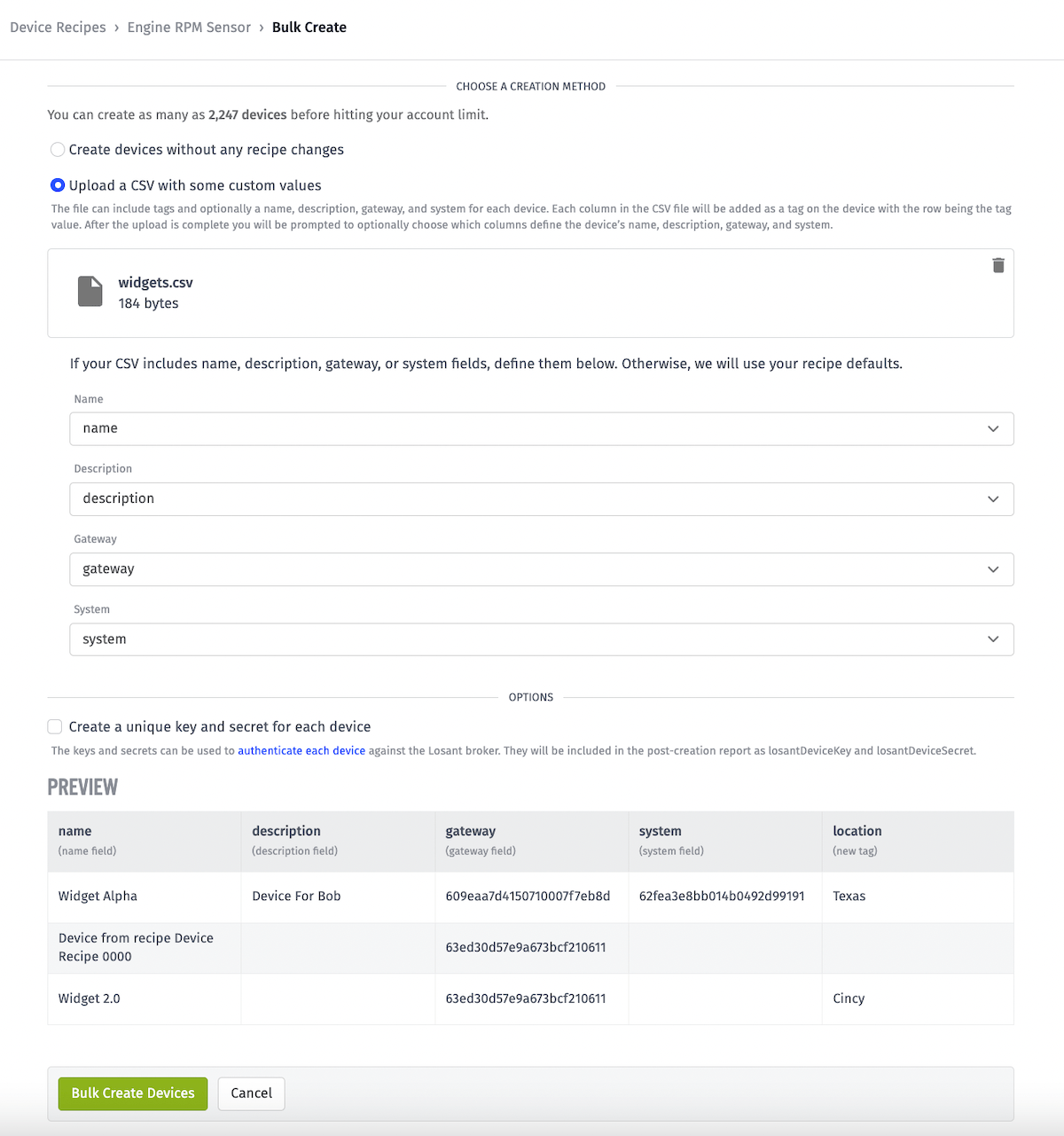 CSVs are expected to have a header row, and then all subsequent rows represent devices to create. You can optionally choose what column represents the names for the new devices - if you don’t, the default name from the recipe will be used (with an auto incrementing value appended). You can also optionally choose a column that represents the descriptions for the new devices (and if you don’t choose one, the description in the recipe will be used). All other columns are treated as device tags - the name of the column (the header) is treated as the tag key, and the values in the column are treated as the tag values for the devices. If you leave cells blank in a tag column, that tag will not be set for that device row. You can also override tags already provided by the recipe by naming a column the same as the tag key in the recipe (and if you leave values in such a column blank, the default tag value from the recipe will be used). You cannot manipulate device attributes with CSV bulk creation - the device attributes are always directly copied from the recipe with no modifications.

The above screenshot is showing what would happen with the import of the following CSV file:

You also have the option of creating a unique access key for each device as part of creation. If you check this box, the result of the bulk creation contain a a newly generated access key and corresponding secret for each created device.

After bulk device creation (in both the simple or the CSV case) you will be presented with a table of the created device information, along with the option to download the created device information as a CSV file. The resulting information will include all of the information from the original CSV, plus any blank cells filled in with the values actually used for that device (such as generated device names, etc..). In addition, there is a losantDeviceId column added, which holds the ids of the newly created devices. If there are any errors in creating any of the devices, those errors will be in a special creationErrors column of the result - if that column is blank, then the device for that row was created successfully.

In the above example result, all 3 devices were created successfully. The creationErrors column is blank for all three devices, and all three have a losantDeviceId. You can also see how the name was auto-generated for the second device as Builder Kit Widget 0000, and the board tag was filled in with the default recipe value for the first device. Finally, because we choose to create a unique key and secret for each device, there are losantDeviceKey and losantDeviceSecret columns with the key and secret for each device it its respective row.