The Input Controls Block allows users to send device commands, or trigger workflows, directly from a dashboard. The block includes various input components to allow for configuring the payloads sent with those commands or triggers, and those components can also be configured to show the current state the application devices. 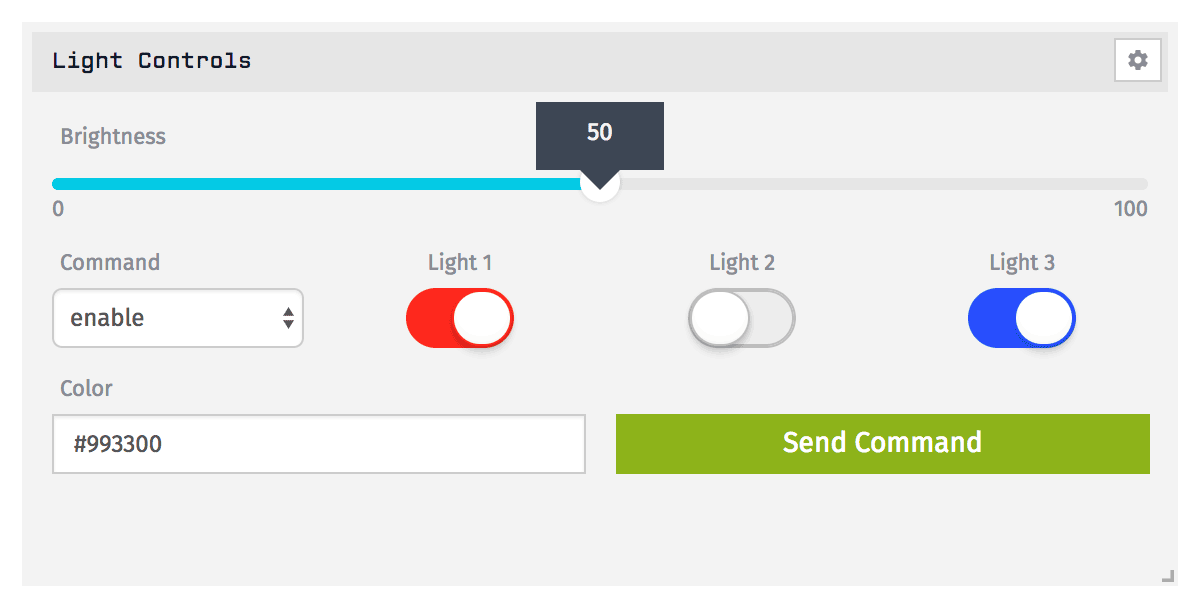 From the block’s edit screen, controls can be added by clicking the “Add Controls” button at the bottom of the configuration panel. This will open a drop-down menu containing all of the available input types. On selection of a control type, a new configuration panel will appear for that input.

Controls can be removed from the edit screen by clicking the trashcan icon at the right side of the control’s configuration panel.

On the edit screen, all controls can be resized and rearranged within the input control block. To move a control, simply click and drag the input to a new location. To resize an input, click and hold the handle in the bottom right corner of the control and drag the control to its new width.

By setting dynamic default values for the selected controls, the functionality of the Input Controls Block can be extended to also serve as a series of simple gauges reflecting the last recorded state of the selected devices. When the block is “locked” (the lock/unlock option in the block settings menu), each of the controls that has a dynamic default set will update with a new value every time the dashboard refreshes.

Any control that has a dynamic default set is marked with an icon in the control’s label. Any control whose query fails to return a result, or if the result cannot be cast to a value the input can display (such as a string being applied to a range input), will be indicated with a red icon. That input’s default will fall back to the static value.

When setting a dynamic default value, the following values must be defined for the data query:

Range sliders allow for the setting of number values. When configuring the input, it is necessary to define the range’s minimum, maximum and default values, as well as the step size (the size of each “tick” in the range slider). 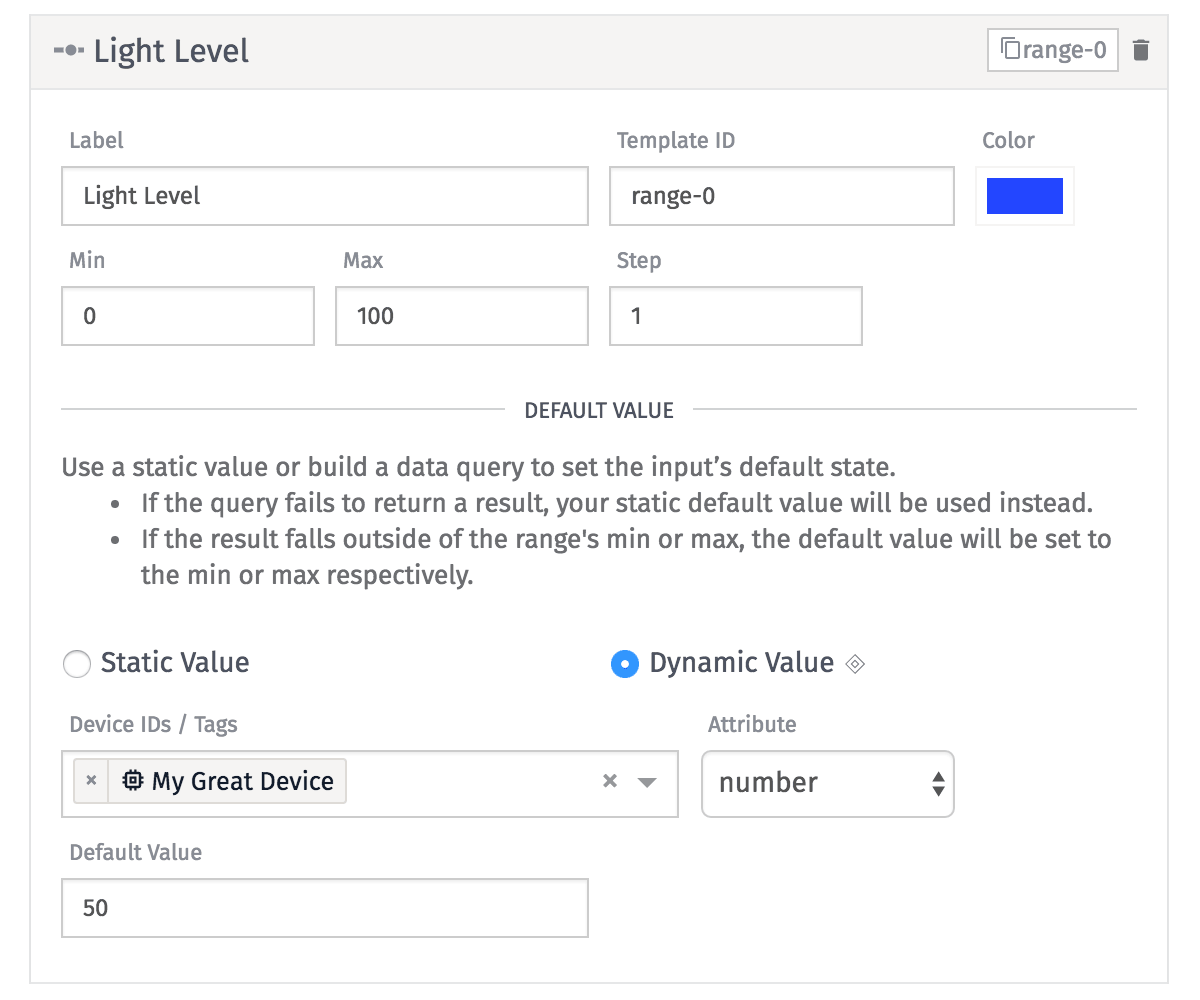 From the dashboard, the input’s knob can be dragged left or right to set the numerical value to be sent in the payload. The area to the left of the knob will appear in the color selected during configuration.

Toggle switches allow for the setting of boolean values (true or false). The default value must be set. 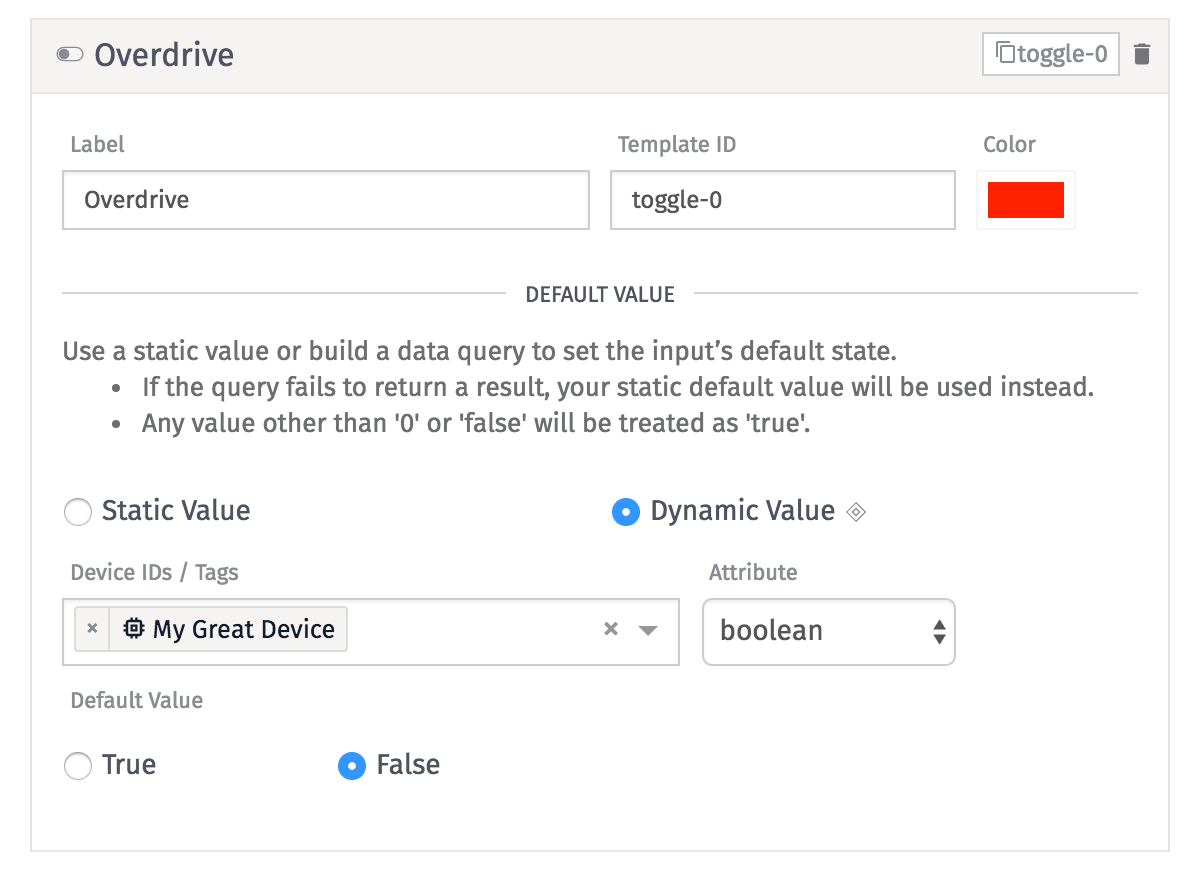 From the dashboard, the toggle can be flipped between the two values. When set to true, the toggle’s background will match the color chosen for it during configuration.

Text inputs allow for the setting of arbitrary values, usually as a string. The control may be left empty by default if desired. 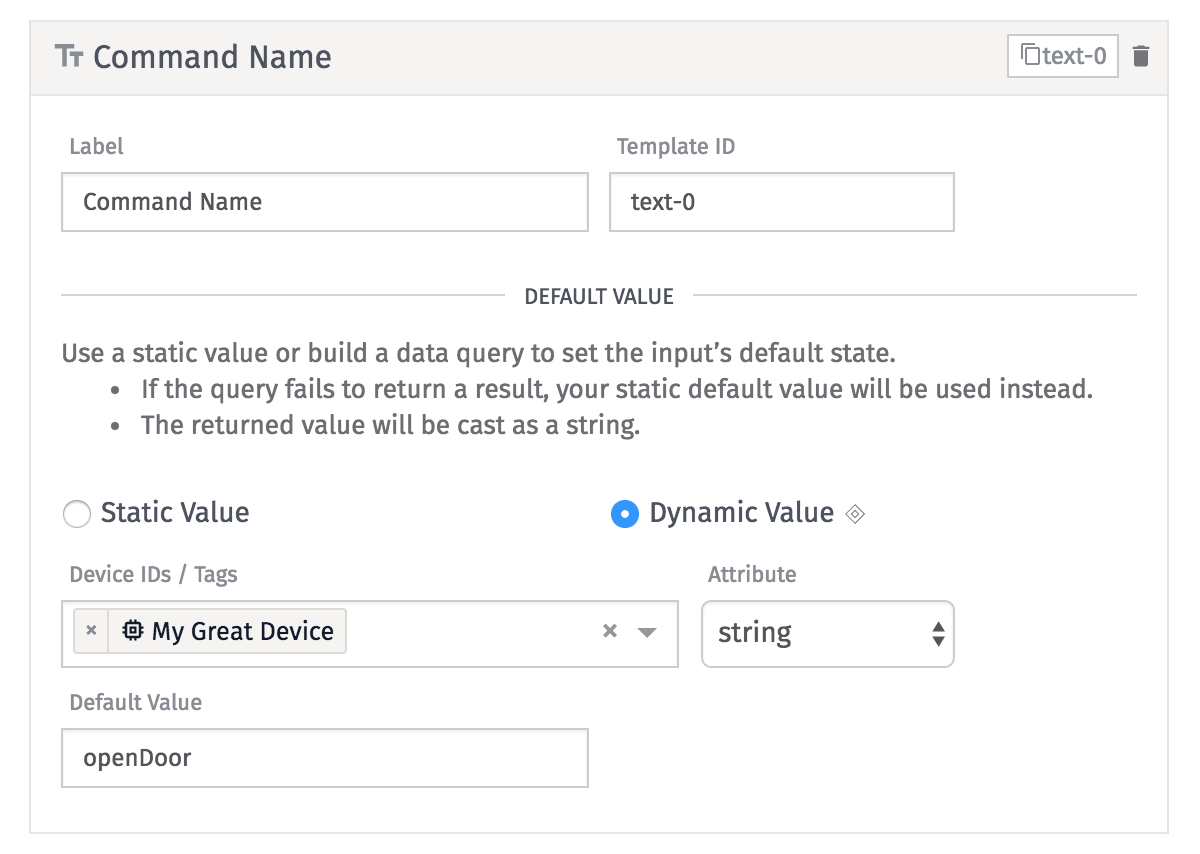 From the dashboard, enter some text within the text input field to use within the payload or command name.

Dropdowns allow for setting text values in the payload, but unlike a text input, the user’s options are limited to an array of values specified in the block. When configuring the block, the default value is “no value”, but custom options can be configured. 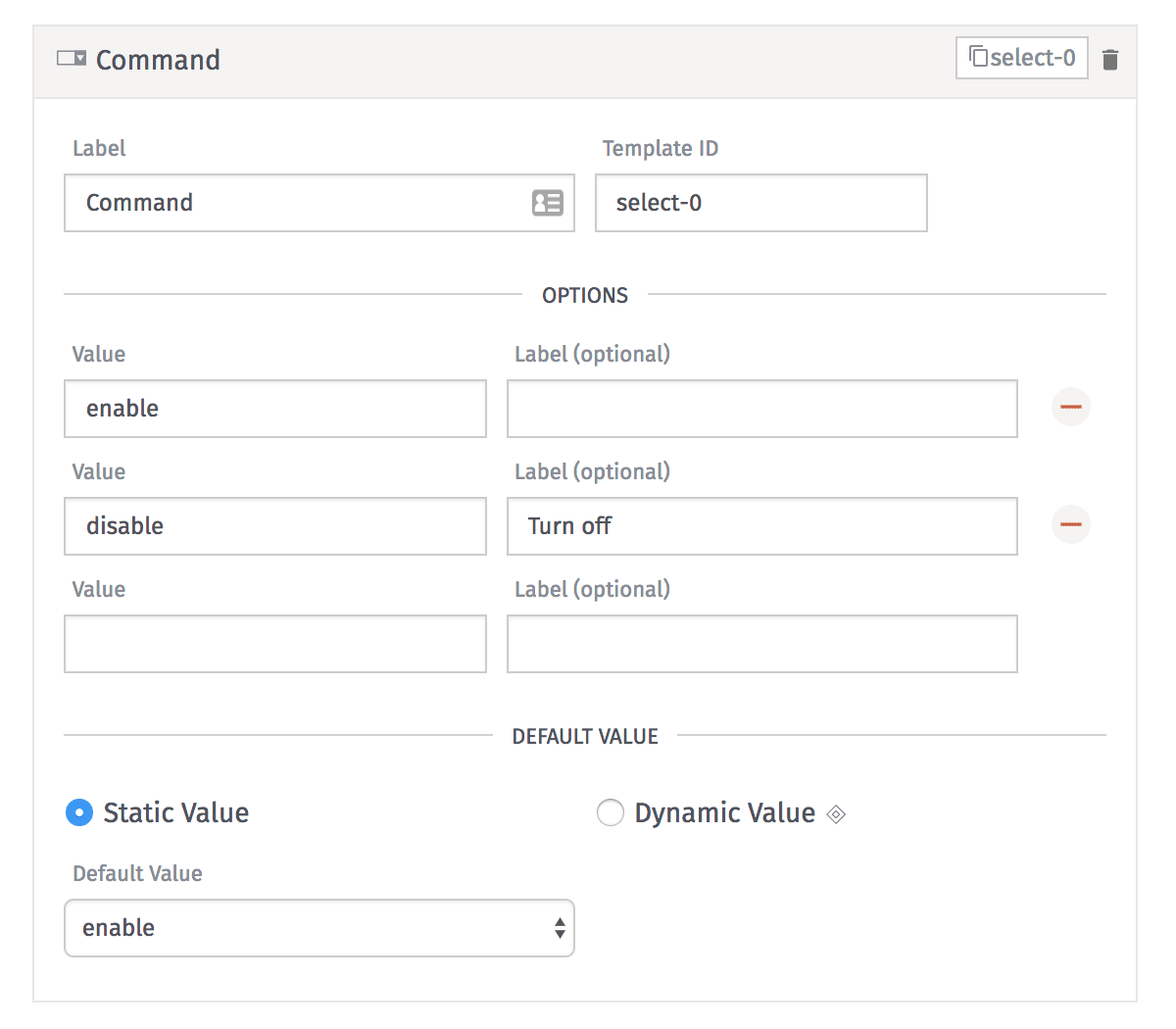 For each option, a “value” is required; this is the actual value that will be rendered out in the payload. Optionally, a label can be set for each value, which reflects how that value will be depicted in the dropdown. If no label is set, the option’s value will serve as the label.

If the dropdown’s value is set by a dynamic default, and the current value is not one of the configured options, the option will automatically be added to the dropdown and will be selected by default. 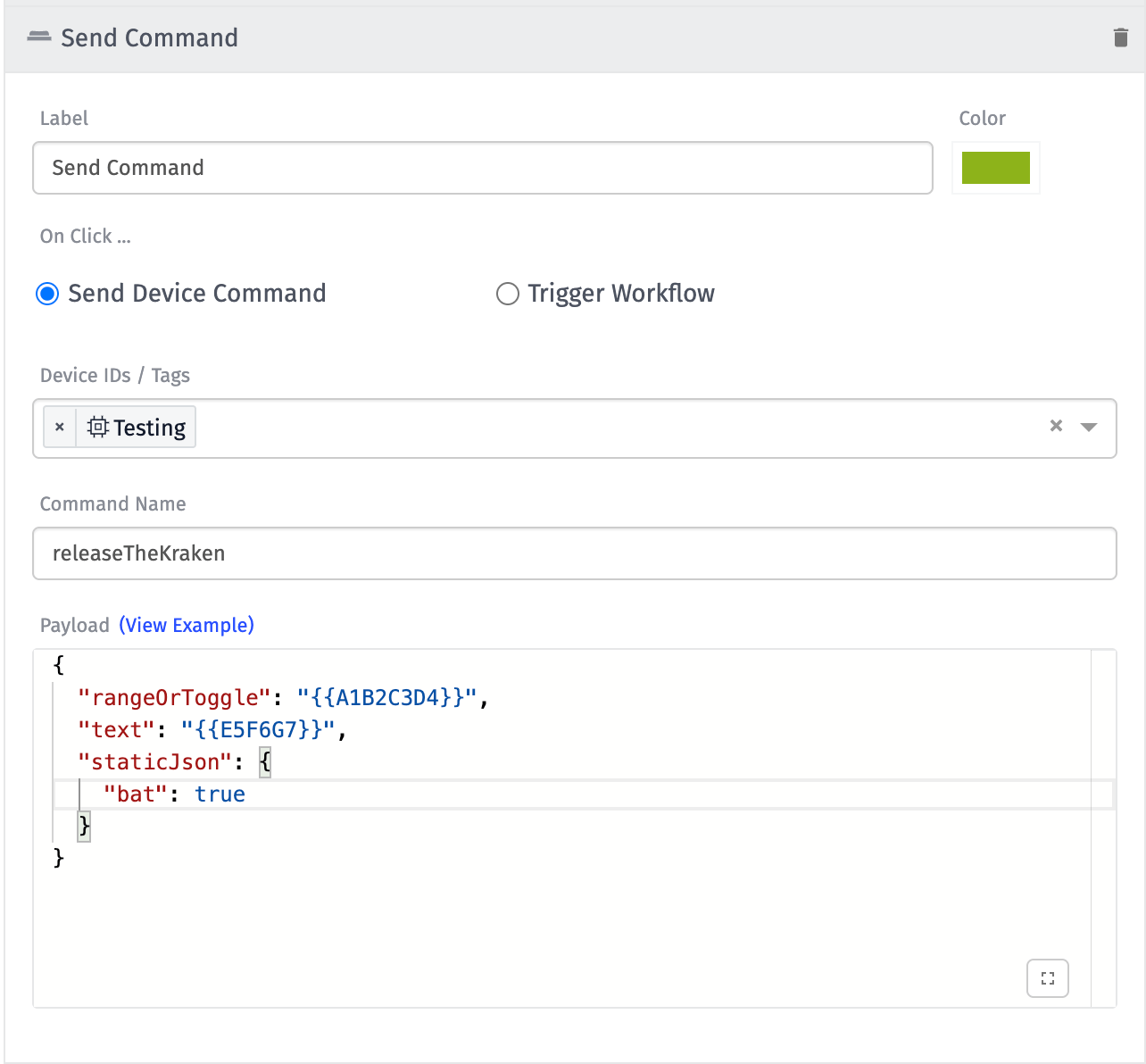 To send a device command with a Button Trigger, select the Send Device Command radio button. This will display two required input fields:

If the button should trigger a workflow, select the Trigger Workflow radio button. This will display one required input field:

The Help Block is a special component in the Input Controls Block that allows text to be displayed to users for the purpose of explaining, in greater detail than can be conveyed in a button label, what exactly will happen when a button is pressed and a workflow / device command is fired off. 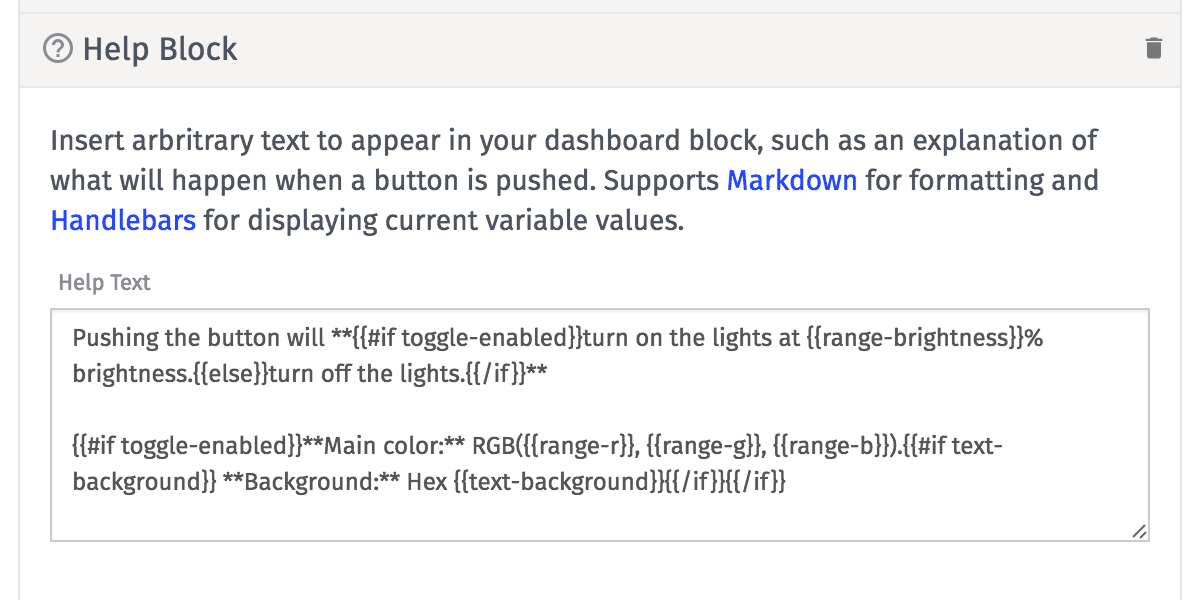 The component has only one input: a textarea in which arbitrary text and string template referencing values by Template ID can be entered. These values will update as the user changes input values in the other components.

The textarea also supports Markdown, meaning that links, text formatting and even images can also be displayed within the Help Block.

The Help Block is the only Input Controls component whose height can be adjusted – up to four times a normal component’s height.

Device commands and workflow triggers may optionally be sent with a JSON payload, constructed as a JSON template. It is the purpose of the input controls to help construct the payload quickly and easily from the dashboard.

When constructing the JSON template, the values of the other inputs are referenced by their Template ID. For example, given the following configuration … 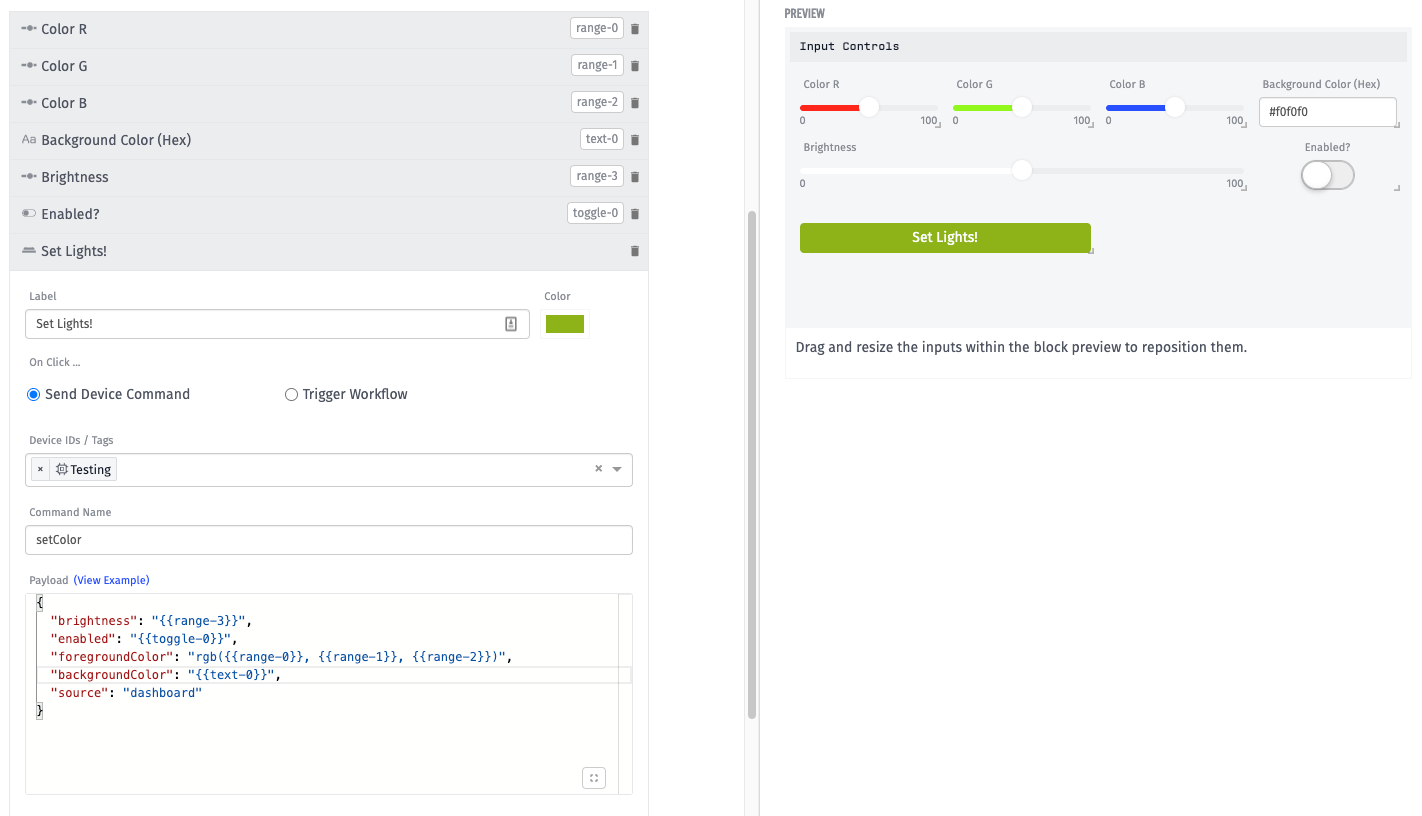 On press of the button, “My First Device” will receive a command named “setColor”, with the following payload:

brightness is passed as a number and enabled is passed as a boolean, whereas the R, G, and B values are passed as part of a string since the foregroundColor property’s value is wrapped in double quotes. There is also a static property of source being passed in the payload, and since we are not assigning any Template ID to its value, the property will always be submitted with a value of "dashboard".

Note: If a payload is not defined for a Trigger Workflow button, the virtual button’s default payload – as set within that button’s parent workflow – will be sent when the Button Trigger is clicked. To send a blank payload instead of the default payload, set the payload value to {} (opening and closing curly braces with nothing in between).

In order to send commands or trigger workflows, the Input Controls block must be switched from “Locked” to “Unlocked”.

In the block configuration, the option of setting the default mode of the block is available; this is the mode the block will be in when first displayed to the user.

When in “Unlocked Mode” …