The Device: State Node allows a workflow to update the state of a device.

There are multiple inputs to define for the Device: State Node. These break up into four different sections.

First, choose a device for which you would like to report state. You may choose a specific device or reference a device ID on your payload using a payload path.

For Edge Workflows, the default value is the payload path of deviceId, which is the device on which the workflow is running. You may still choose a specific device, but are limited to choosing only certain devices in your application …

For Embedded Workflows, there is no option to choose a device as the workflow may only report state on behalf of the device on which the workflow is running.

Next, choose how you would like to define the state attributes to report. Begin by choosing a “Data Method” … 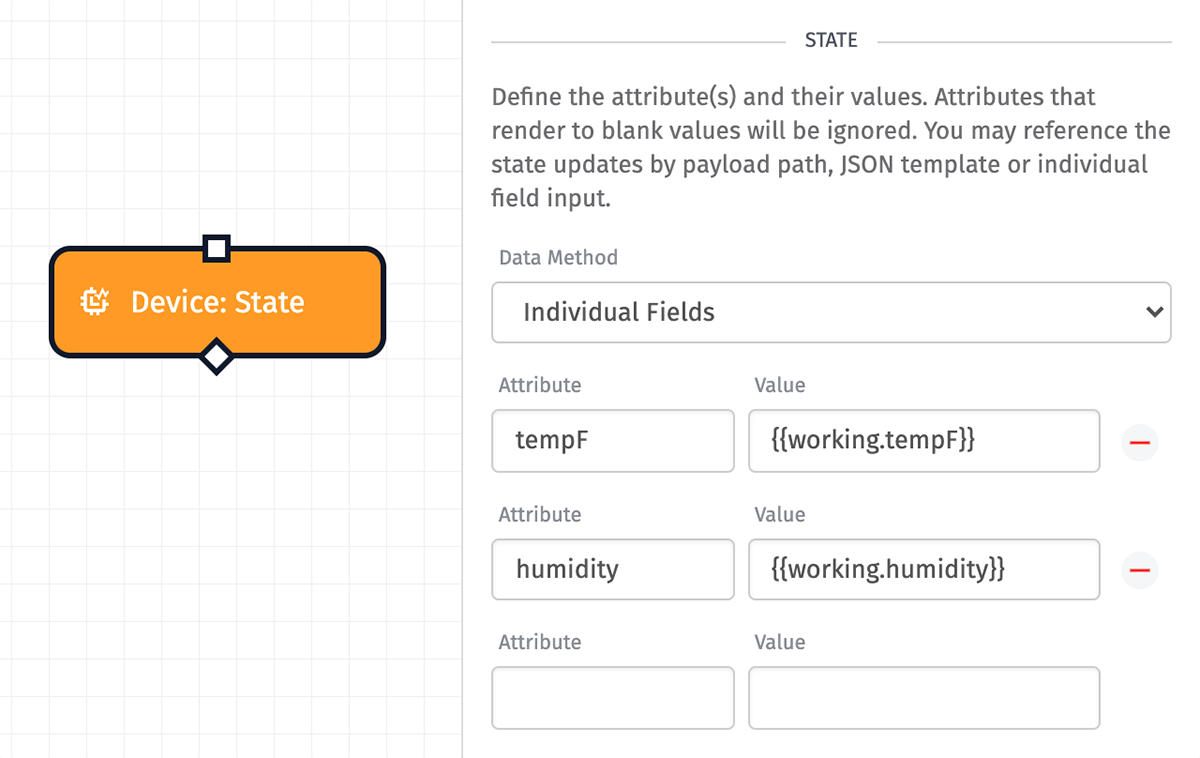 Next, choose the timestamp to associate with this state report. 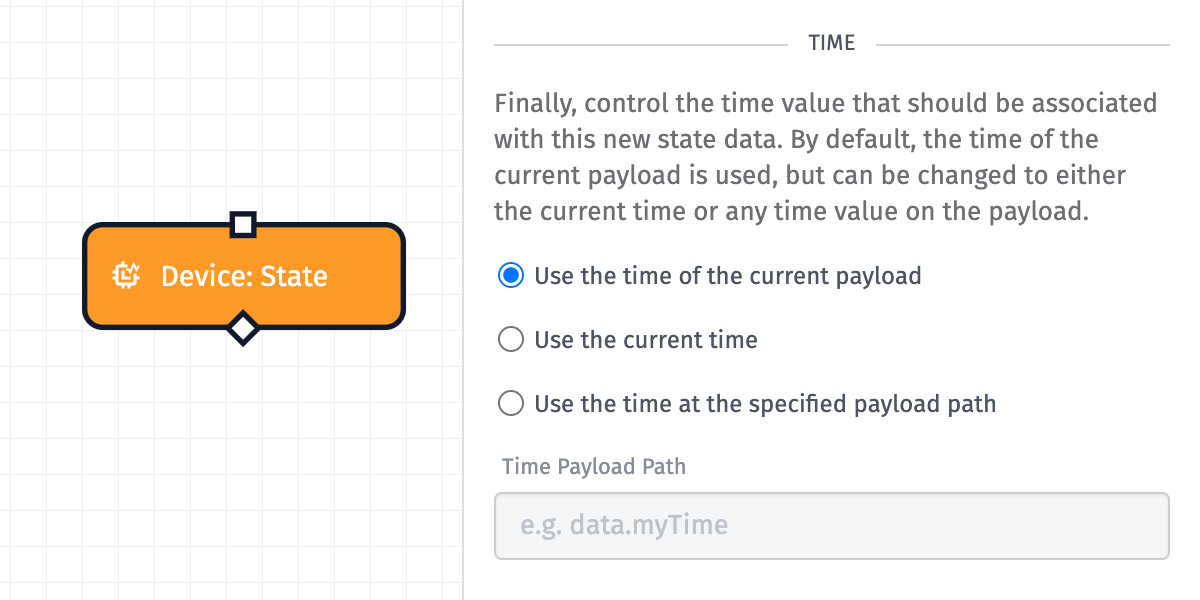 Note: When using the Device State Node in an Embedded Workflow, the time is based on the timestamp in milliseconds passed to eea_loop (for “Use the time of the current payload”) or the result of an eea_get_time call (for “Use the current time”). If, for either of those cases, the provided value does not appear to be an Epoch timestamp (in other words, if the time is based on the device’s last boot time), the Device State Node will not include a timestamp on the state report (which means that Losant will timestamp the state report with the time it is received by Losant).

Optionally, you may define a payload path where the result of the state report will be placed.

For Embedded Workflows, the value placed at this path is the error code returned by eea_send_message, where 0 indicates success and any other code indicates an error. If no result path is provided and eea_send_message returns a non-0 value, the node will throw an error and execution of the workflow will cease.

For all other workflow classes, the value will be an object with a success property. Note that a success only indicates that the state report has been enqueued; it does not necessarily mean the state has yet been recorded for the device, nor that it ever will be.

For example, if you define a single attribute to report, and that attribute is not defined on the device, the provided state will not record despite the node returning a success object at the provided path.

Unlike for Embedded Workflows, an error to enqueue the state report without providing a result path will not cause the node to throw an error; execution of subsequent nodes will continue.

Embedded Devices, however, do not have a message queue mechanism built into the Embedded Edge Agent and thus, by default, state reports will not reach the Losant platform if the device is disconnected from the MQTT broker. However, it is possible to create your own queue system on your hardware and replay the state reports when the device connects again.

When defining your state report as a JSON template or a payload path, the Device: State Node accepts a number of different formats for the state data.

Note: When using the Device State Node in an Embedded Workflow, this form is not supported.

Note: When using the Device State Node in an Embedded Workflow and providing state in this form the time provided in the node configuration is always ignored - it is assumed each entry has an appropriate timestamp set.

The returned value for a successfully enqueued device state update, given the example node configuration in the screenshots above:

Note: This does not guarantee that the device state will be updated. This only means that initial validations on the properties have passed, and the update has been queued.

In the case of a failed enqueued device state update: