Getting Started with the Raspberry Pi

The Raspberry Pi is a very popular compute module commonly used in IoT-related projects. This guide covers how to connect the Raspberry Pi to the Losant Enterprise IoT Platform. 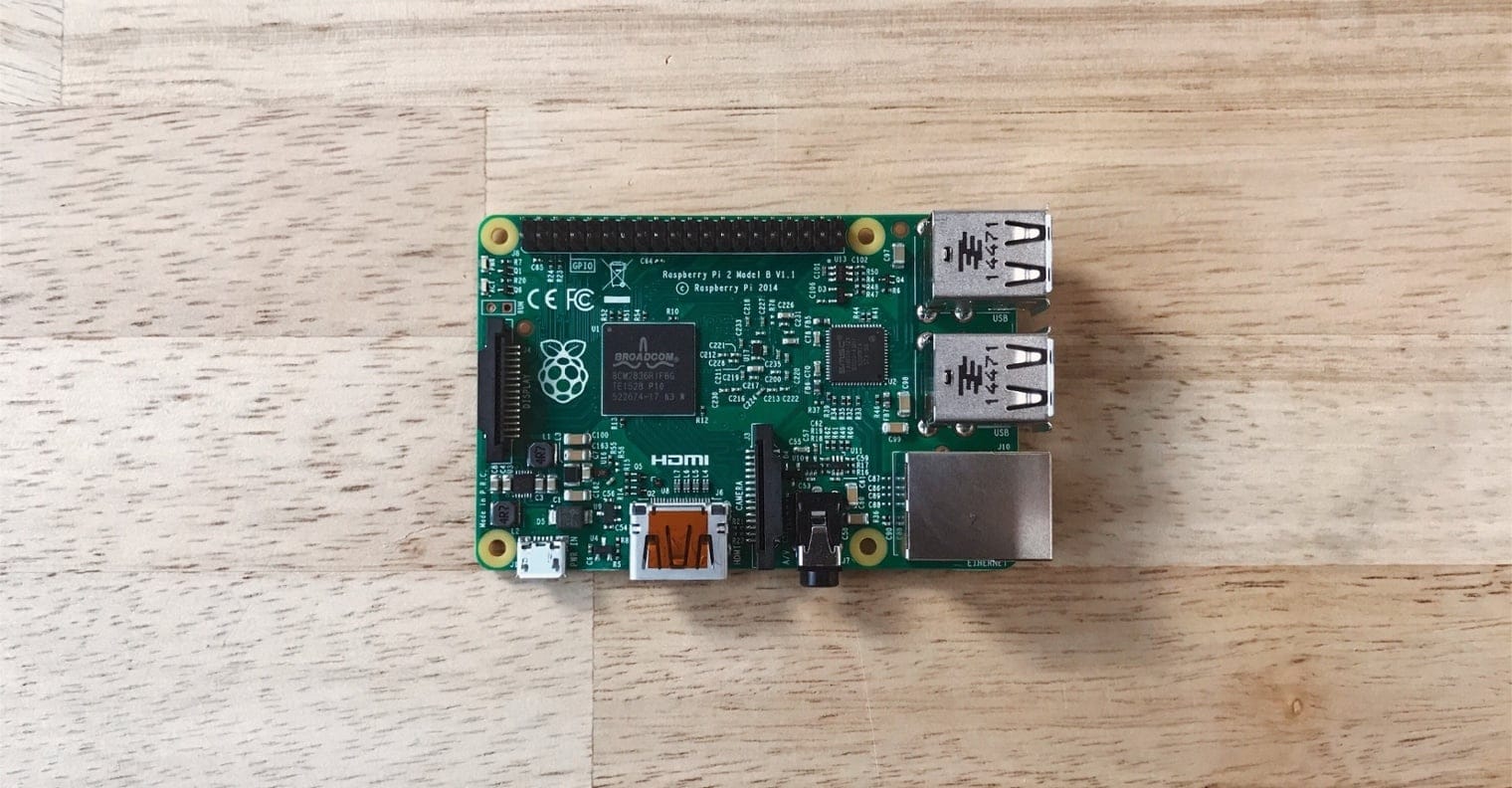 The source code for this example is available on GitHub.

Since Python comes pre-installed on Raspberry Pis, we are going to use Python for this example. If you are not a Python user, here are some great alternatives:

First, we need to install the Python package manager: pip. Or if you have it already, you can skip this command. 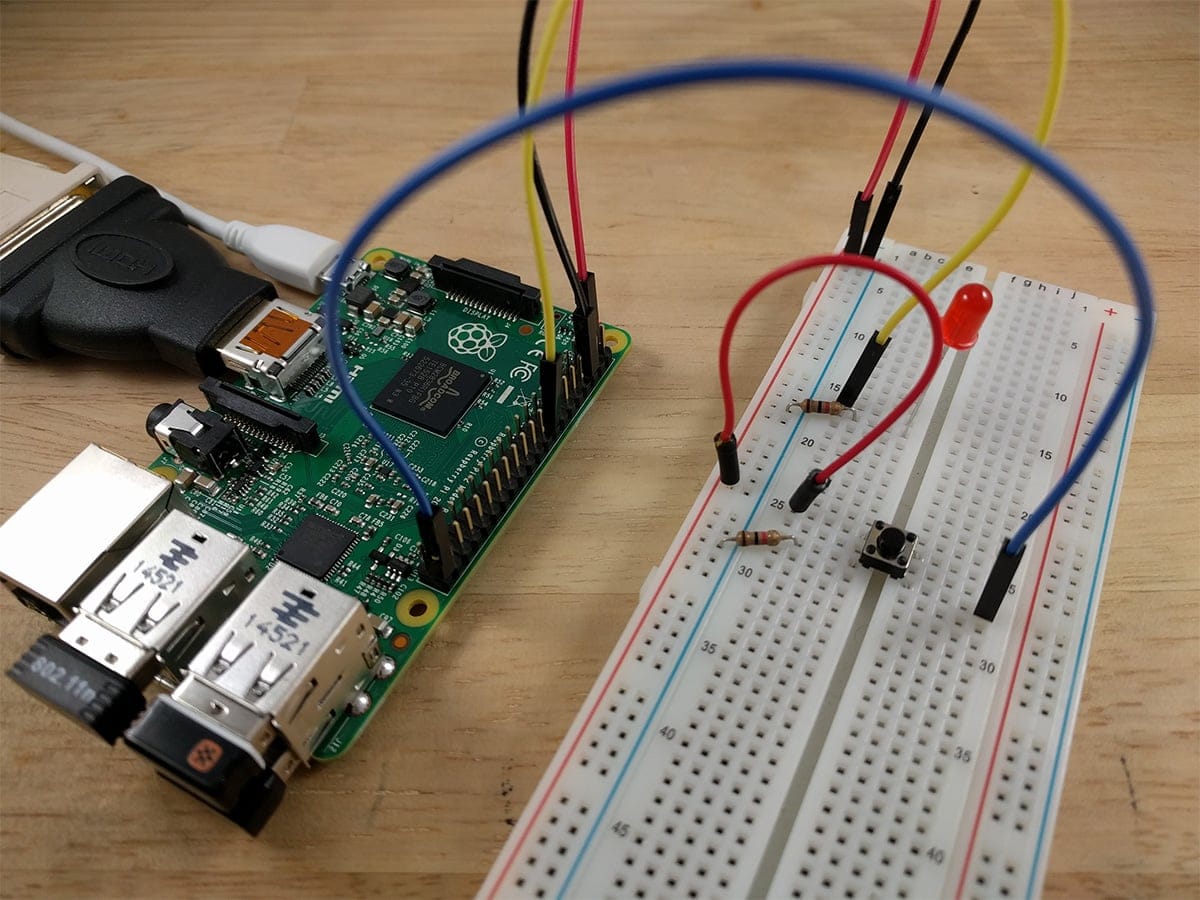 In Losant, create an account and an application if you haven’t already.

Next, add a new device for the Raspberry Pi. As mentioned before, this example only reports state when the button is pressed. So the only state attribute that’s needed is button. Since a button usually just has an on/off value, set the data type to Boolean. 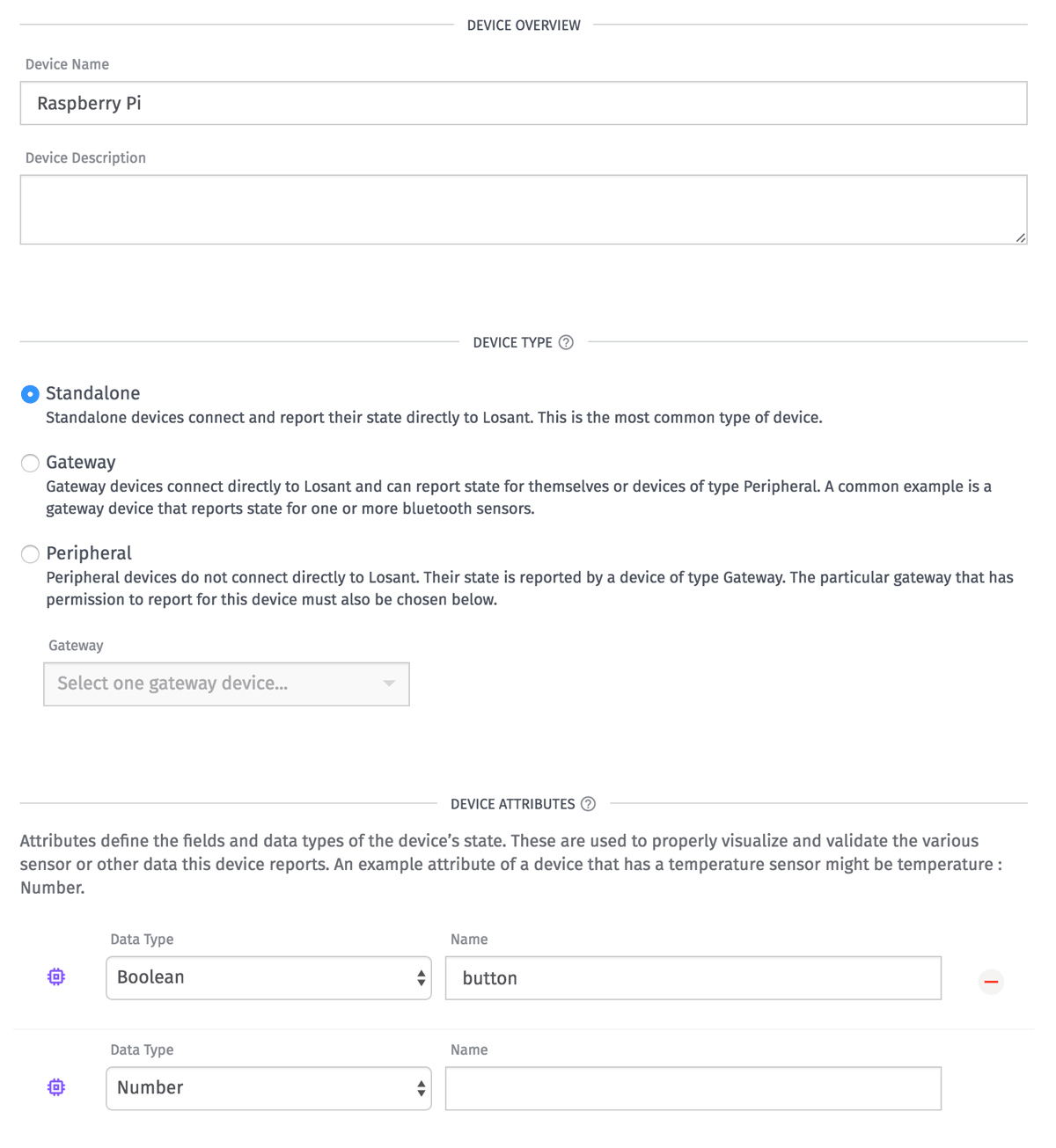 Finally, create an access key, which you’ll use to authenticate the device’s connection.

Now let’s write the firmware for the device. Create a file called index.py. In that file, include this code:

In index.py, we initialize the libraries, setup GPIO, and create a Losant device. When creating a device, you give it my-device-id, my-access-key, and my-access-secret. You have already obtained these values from Losant.

For understanding, let’s walkthrough the other bits of code.

We need a way to “listen” for a button press. When the button is pressed, we need to sent state to Losant. This state will contain the attribute button and the value of True.

To do this, we can use gpiozero. First, we set up a Button.

Next, we can define a function to be called when the button is pressed.

Button has a when_pressed property that will call a function you define when the button is pressed. We can do that like so:

Once the states are being sent, Losant workflows allow you to trigger any number of useful actions. The below workflow will send an SMS message whenever the button is pressed. 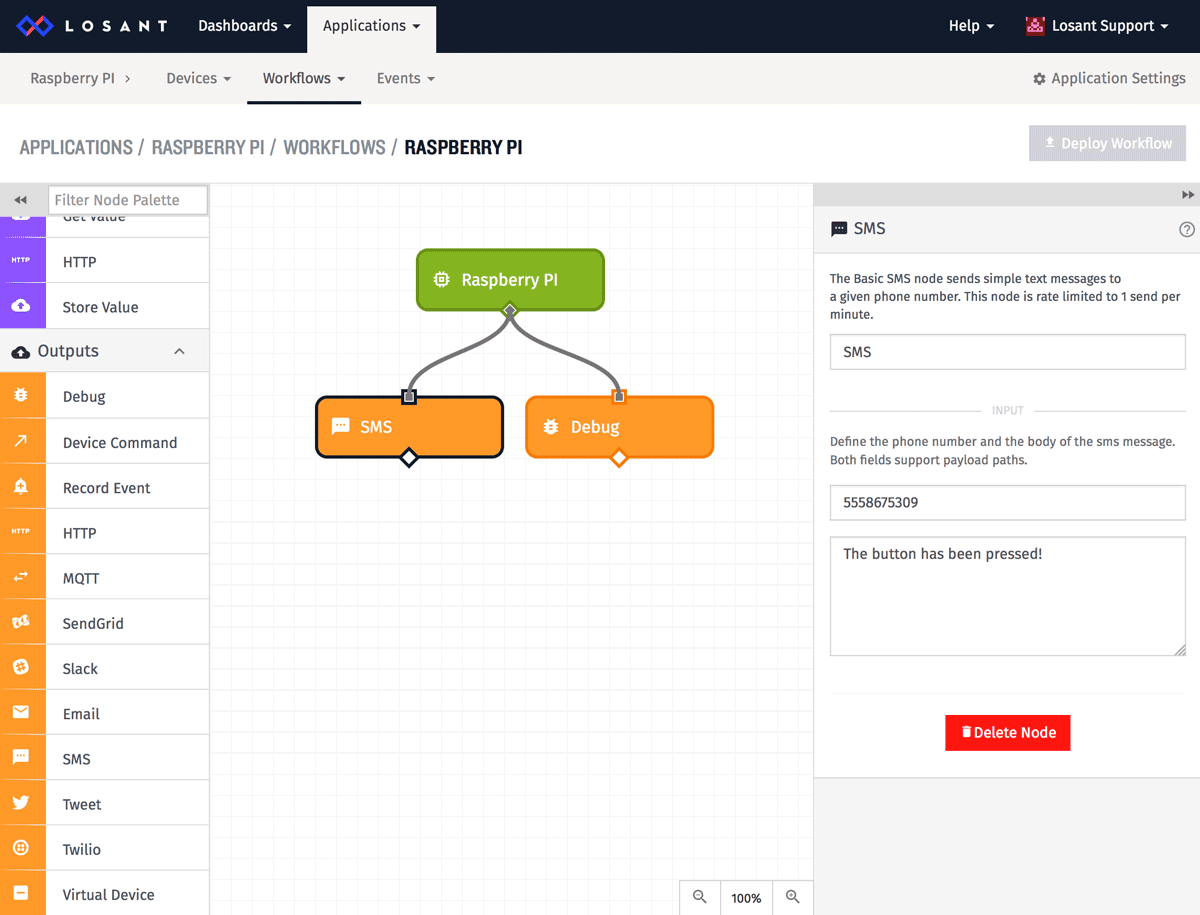 Along with states, Losant also supports commands, which allow you instruct the device to take an action. For this example, the device will watch for a “toggle” command, which will cause it to toggle the LED.

First, we set up an LED.

The Losant device can be configured to call a function when a command from Losant is received. Next, we need to define that function.

To listen for commands, the Losant device will emit the ‘command’ event whenever one is received from the platform. If the command’s name is “toggle” the LED is toggled.

Finally, we can tell the Losant device to use this on_command function.

A typical way to send commands is by using a Losant workflow. Below is an example that will send the “toggle” command whenever a virtual button is pressed. 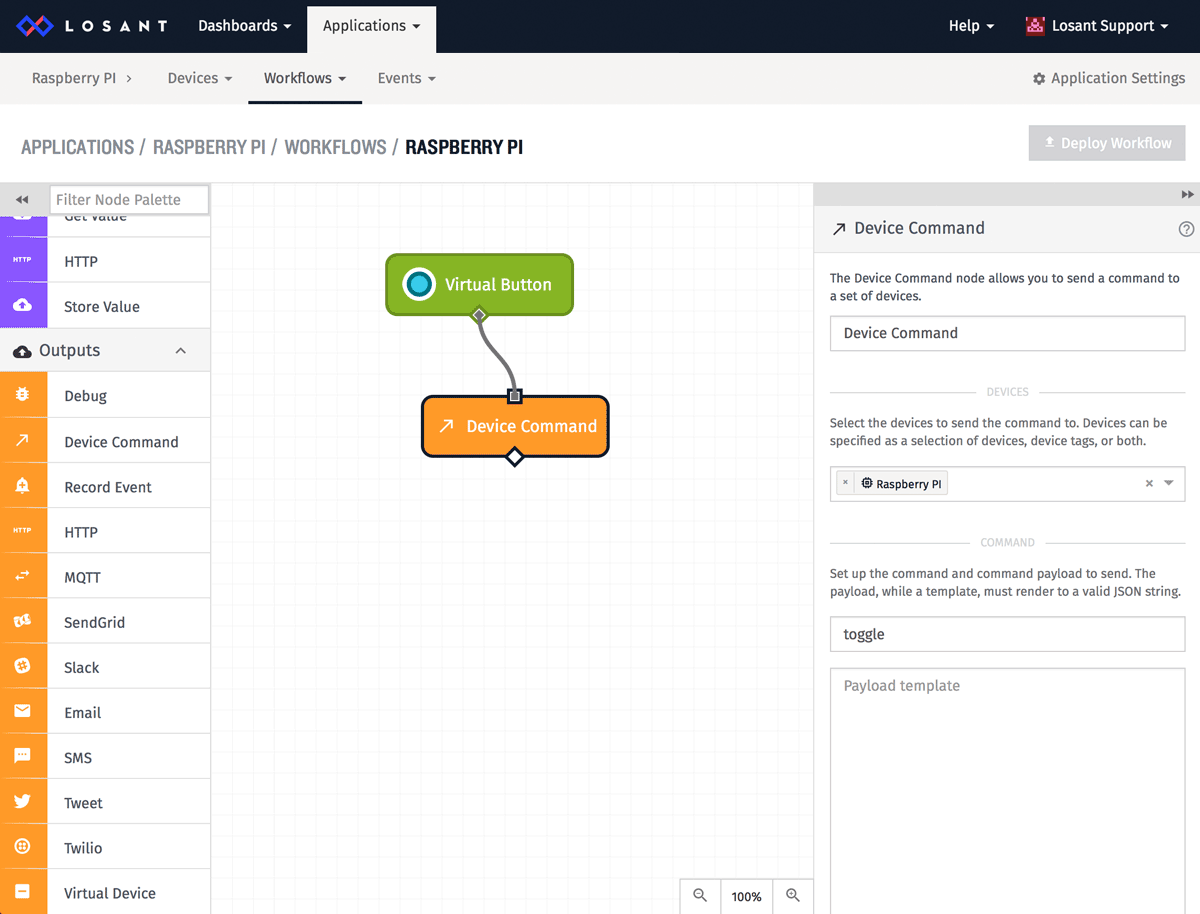 Whenever the button on the above workflow is clicked, it will send a command with the name “toggle” to the connected Raspberry Pi.

Now, you are up and running with the Raspberry Pi and the Losant IoT platform. For more ideas, check out the Losant Blog or Tutorials and Projects.

Need Help? Your questions, feedback, and ideas are very important to us. Let us know in the Losant Forums.